How and why they made a new ‘Blade Runner’ film

It has taken 35 years, and many a twist and turn, to make Blade Runner 2049. Because of the clout and appreciation of the 1982 original, the film’s journey to the big-screen is peppered with tales of frustration, pressure and wild excitement.

Over recent weeks I spoke to “Blade Runner” screenwriter Hampton Fancher and its star Harrison Ford, both of whom have returned for the sequel, as well as “Blade Runner 2049” director Denis Villeneuve and its villain Jared Leto. The quartet broke down how and why they made “Blade Runner 2049,” and here’s what they had to say …

Why did it take so long?

Hampton Fancher: “It happened gradually. For a year I’d heard that Ridley was going to do a “Blade Runner 2.” Me and Ridley met about three times in the late 80s over the space of 10 years to discuss the possibility of a sequel, and I was kind of excited about the idea of Deckard having a future. But the rights were never clear. It wasn’t until a few years that Cynthia York finessed that into a solution, and they became available.”

What was your first reaction to the the confirmation “Blade Runner” was coming back?

Hampton Fancher: “My agents and friends said you should call and tell them you’re interested. And I said, ‘No f**king way. If they want me they’ll call me.’ So I didn’t do anything, and then finally Ridley called and that’s how it started.”

Harrison Ford: “Show me the script. Who are the people involved? When Ridley called the first question he had was, ‘Would you in theory be interested in this?’ He is quoted as saying that my reaction was, ‘Meh.’ But that was just my first reaction. But what really mattered to me was the story to be told. And whether the character had a worthy purpose in the telling of this story. From my point of view. I was sure it did from Ridley’s. But we haven’t agreed on everything all of the time. This was a great opportunity, though.”

What was the most appealing aspect of returning to the world of “Blade Runner” and its characters?

Hampton Fancher: “It is all about character. It is an internal exercise, and this is a film for actors.”

Harrison Ford: “You recognize and reflect on the circumstances of the character. I don’t go to too much to the general. I try to keep it specific to the character. Where has he been? What is he doing? How is he going to face the twist and turns that are coming his way? And how does that character mix with the overall story? What are the themes? In each scene there’s a bit of story that needs to be told, how do we get the most out of that story to progress the character? Because I believe it’s the alliance between character and story that give you the best result.”

Jared Leto: “It was just leaning on script. I had a great partner in Denis. You rehearse, you research, you explore, you experiment, you come part investigator, part researcher, you let your imagination wander, and you experiment.” 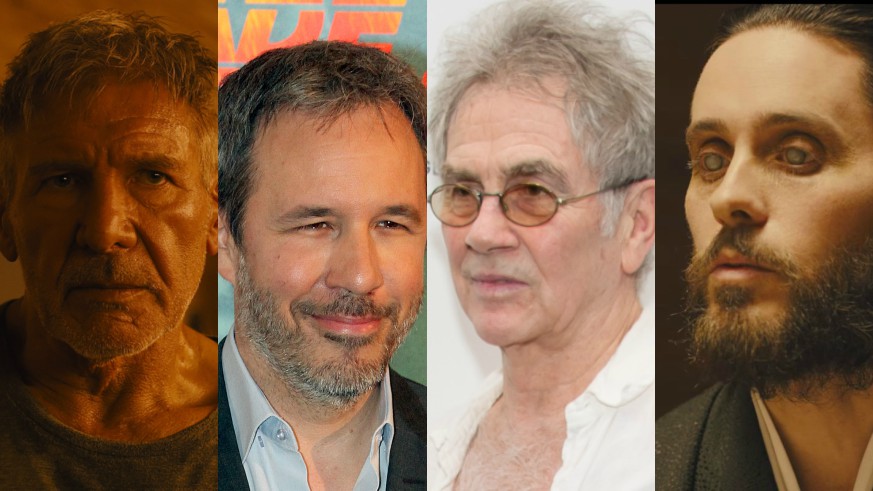 What was it like working in the shadow of the original “Blade Runner”?

Denis Villeneuve: “The ultimate test for a movie is if it can go through time and if it can still be accurate and meaningful years after it is released. That’s what the first film was able to achieve. Even though the world moved in a different direction than the first movie proposed, there are a few things that are prophetic. Our relationship with technology has evolved, and the relationship between man and his creator is something that can be revisited through our new relationship with technology.”

Hampton Fancher: “In terms of the atmosphere and ambiance, it is stronger than the old ‘Blade Runner’. Ridley was limited, he made that movie on a back lot set, and he was impinged upon by a lack of money. Ridley did fantastic, but this is a bigger world … ‘Sicario’ had the kind of muscle, and Denis as the director, as the manager of production, he had the kind of balls that Ridley had with ‘Black Hawk Down’. So in terms of the mountain climbing of the movie, and what it would take to make such a movie, I knew he had what it took. Then when I met him I knew he was a poet, and a lyricist, and everything was right. He had the mentality, but most of all he had the heart. He has a delicate touch. He is like a musician with this thing, and the way he talked about it made me know he was perfect. He is definitely a general, but he is tender and a boy genius poet.”

Jared Leto: “The original ‘Blade Runner’ is one of my favorite films. I have seen it a thousand times, and I’ve told a thousand people to watch it. Harrison is a legend to me, and then Denis is a genius, and a phenomenal filmmaker. To have the opportunity to work with them was just mind-blowing. But they both gave me a gift, and that was the confidence they gave me, and that meant a lot.”

What did you want to achieve with “Blade Runner 2049”?

Hampton Fancher: “This is going to happen in the foreseeable future: there are going to be Replicants. And those Replicants will be empathetic, and when that happens they might succeed in a way that we haven’t. Because we can’t rely on our empathy to solve the problems that we have. Even though that’s the solution, I think. That was one thing that was really intriguing to me that motivated my tenacity. The other thing I wanted to comment on was ecology. And how we have fu**ed the planet. We have sh*t in our nest.”

Denis Villeneuve: “The movie can be seen as a comment on segregation, but I would not dare say it is linked with the evolution of the political landscape today. It is a movie that has a resonance that I hope is out of today’s political topics. You could say that the way the ecosystem collapses is not fake news, and where the climate is going is a comment on where nature is going. But I wouldn’t say it is linked to the current conservative and the fear against globalization.“