How Bumblebee stopped the Transformers franchise from being ‘boring’

So in the summer of 2015 he a assembled a writers room, where some of Hollywood’s best and burgeoning scribes came together to discuss potential sequels, prequels and spin-offs.

DiBonaventura admits to Metro that the “fresh eyes and new takes” from the writers’ room “freed minds to look at the franchise in different ways,” and the time was nigh to make a change.

“The Last Knight was the last in the Bay series. People think we did this movie as a reaction to the fifth movie. Bumblebee was being planned before the fifth movie. We had done 5 of these with a particular aesthetic and we wanted to do something different.”

“As a filmmaker you get tired of making the same thing. And we wanted to do something different, too. We also felt we owed the fans something new. If you keep a franchise going you are doing it for the fans as much as yourself. I get bored, why wouldn’t they at a certain level?”

Christina Hodson pitched her “core idea” for Bumblebee, of the Transformer leaving the Civil War on Cybertron and coming to Earth on his own in 1987, where he forges a friendship with a teenage girl, in the writers’ room.

“I went into the room knowing I wanted to do a girl and her car,” she explains. “Steven Spielberg [executive producer] had always said he wanted to do a Bumblebee stand alone.  He said back in 2007 promoting the first movie that he loved the story of a boy and his car. It was so personal, so intimate.”

“I remember the first car I had. It was a piece of s***. But I just remember the excitement, even when I first started my dad’s car, it was just the joy and wonder of starting this big hunk of metal.”

DiBonaventura instantly knew that Hodson’s idea was perfect to breathe life back into the franchise.

“We wanted to focus in on an a character and we wanted to tell a story in a different way to what we had not done before. We wanted an intimate story. That was the key decision early on. We had done a boy and his car, so when she pitched a girl and her car it felt different.”

Heavily influenced by Spielberg and Amblin movies, Hodson then set out to write Bumblebee, and was particularly excited to “give audiences and kids the chance to get to know one character really well.” 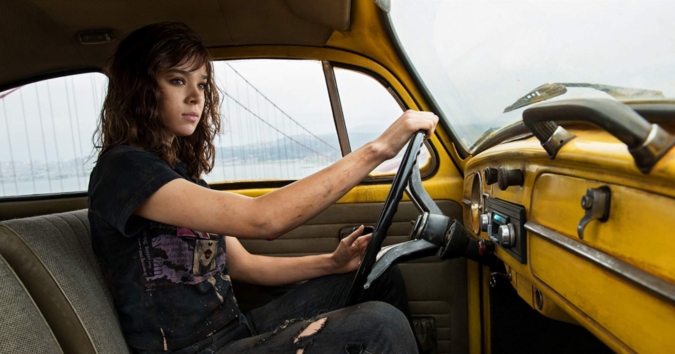 But with lead character Charlie Watson, who is expertly played by Hailee Steinfeld, Hodson also saw the chance to subvert and challenge the tired gender roles that have long plagued mainstream, blockbuster cinema.

“I have always wanted to put female characters in muscular and masculine films,” says Hodson. “I say masculine, but I don’t think they’re masculine. They’re just perceived as masculine. As boys movies. Girls love explosions just as much as boys. Boys love emotional stuff just as much as girls, too.”

Clearly a lot of people feel the same way, because Bumblebee has become the most critically acclaimed entry into the Transformers yet.