How crappy was it when Charlize Theron killed that girl in The Fate of the Furious? – Metro US
Movies

How crappy was it when Charlize Theron killed that girl in The Fate of the Furious? “The Fate of the Furious” is a movie where Vin Diesel races a car that’s on fire — backwards. It has Jason Statham battling untold minions, all while holding a baby. During the climax, our team of speed junkies have to outrace a submarine. And then somewhere in the middle, an innocent supporting character is shot in the head by Charlize Theron, execution-style.

This last bit doesn’t feel like it’s in the same movie. We were watching something ridiculous, ludicrous, OTT. The “Fast/Furious” movies are stupid entertainments, and proud of it. We’re supposed to care a little bit; we’ve been with these characters for 16 years, and we’ve watched as the gang’s ranks have swollen with new additions: Chris Bridges, Tyrese Gibson, “Game of Thrones”’s Nathalie Emmanuel, and in this one former baddie Jason Statham. They even lost one member: the tragically late Paul Walker.

But the part where Theron’s villain cold-bloodedly kills minor franchise character Elena Neves (Elsa Patsky) in front of her weeping, pleading ex (Vin Diesel’s Dom), plus her crying toddler, is way too real. It’s meant to get the blood rising, to make us cry for Theron’s blood. But did we need another reason to hate her? She’s already trying to destroy the world through cyber-hacking. She’s already destroyed a chunk of Manhattan by hacking into cars and remotely causing millions of dollars in havoc — and probably killed who knows how many hundreds of innocent bystanders, though the movie never shows us any deaths. It’s a cheap and unnecessary move, and it takes us right out of a very dumb movie. 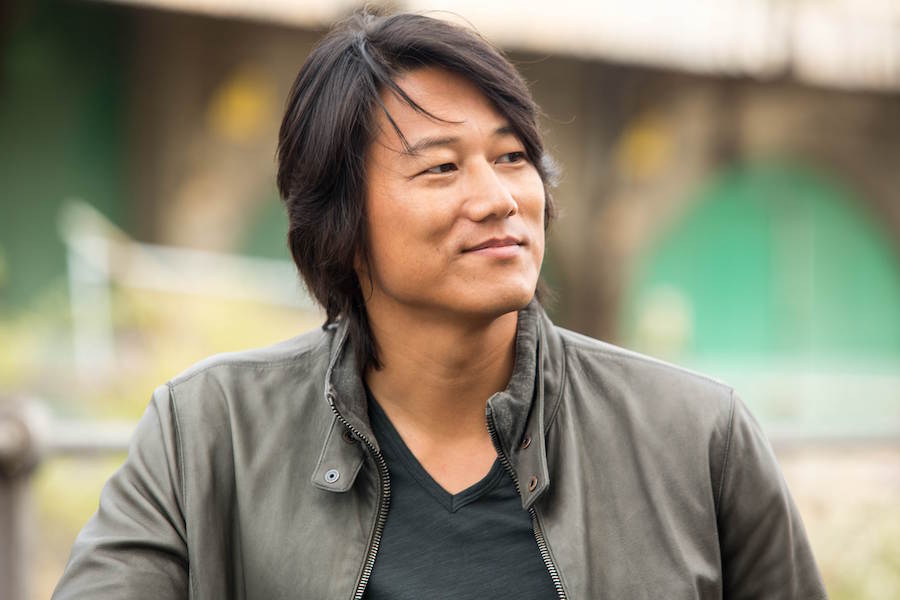 “The Fate of the Furious” isn’t the first stupid movie to dramatically shift gears, slipping an unpleasant death into a movie that otherwise didn’t give a care about human life. There’s one in “Fast & Furious 6.” It’s a smaller moment — in fact, it comes so fast (and furiously) we might not think it’s real. As a movie whose climax involved the longest airport runway in history ends, we see Han (Sung Kang, above), a quiet but very likable member of the franchise since the little-loved threequel, “Tokyo Drift.” He’s walking around, minding his own business, when all of a sudden there’s a big explosion, followed by the first appearance of Statham’s Deckard Shaw. He swings by to announce himself the bad guy of “Furious 7.” He does this by shooting this nice guy in the head.

It’s a shocking moment — and it’s entirely unearned. It’s like being kicked in the face after you’ve gotten off a rollercoaster.

“Jurassic World” has a similar scene. It involves another minor character: the stressed assistant to Bryce Dallas Howard, who is picked up by one flying pterosaur, thrown to another, and finally devoured by an enormous Mosasaurus. It’s not meant to be anything but a thrilling moment, but it comes off as cruel and heartless.

Even edgier movies get this wrong. “Logan” is the comic book movie that really doesn’t feel like a comic book movie; it’s gritty and brutally violent. But it fumbles big time when it comes to the nice family of three who live on a farm, put up our wayward heroes — and pay for it by being slaughtered by the bad guys. It’s intended to show how dark the movie is. But it’s hard not to imagine the filmmakers exploiting this innocent family, just to get a rise out of us. It’s as vexing a moment as the big kill in “The Fate of the Furious.”

For the most part, dumb movies know what they are. Even better-than-dumb blockbusters know not to cross a line. When Han Solo dies in “The Force Awakens,” it’s given the space and the respect of an aria in an opera. “X-Men: Apocalypse” has a scene that should be completely out of place: We see Magneto (Michael Fassbender) watch as his wife and son are murdered by thugs. It’s an unpleasant scene, too, but the movie earns it. Magneto is a character we’ve known for a long time. We know his anguish. We know he’s villainous because of deep-seated trauma. We know that this event is going to push him back over the edge.

Over the 16 years we’ve known Dom, we know next to nothing about him. He growls a lot. He likes to over-use the word “family.” He likes cars and robbing stuff. Admittedly, Diesel gives some of his most emotional work in this scene. But it belongs in a movie that doesn’t also feature the Rock manhandling a missile.