How did Christian Bale transform into Dick Cheney? Vice director Adam McKay talks us through it - Metro US
Movies

How did Christian Bale transform into Dick Cheney? Vice director Adam McKay talks us through it

The transformation of Christian Bale into Dick Cheney for Vice is genuinely staggering.

It’s not just that the British actor gained a whole lot of weight to play the controversial politician. He also had to perfect Cheney’s sly and subtle mannerisms, while working in conjunction with writer and director Adam McKay to make sure that the performance was actually captured and made apparent on the screen.

But how did Christian Bale transform into Dick Cheney for Vice?

“When I first approached him, I think he just flat out said, ‘You’re crazy’,” McKay recalls to Metro when asked about the process. “Then I said, ‘No, no. Because you don’t have to look flat-out like him. Just get in the ballpark. An impressionistic feel of the guy is enough. I don’t want you to be a photo double.’”

“But of course you are talking to Christian Bale. So at the end of it all he looks exactly like him. To this day I still can’t believe he did all of that.”

McKay and Bale immediatley had to work out much weight the actor needed to gain to portray Cheney.

“We brought in Greg Cannon [prosthetic and makeup effects designer] right away and we just did a bunch of make-up tests. And while we were doing the make-up tests we strategically thought what the right weight gain for him was.”

“Because he had to play Cheney young, too. So he couldn’t put on a full 75 pounds because then he wouldn’t be able to play him young. We found this optimal weight.”

“Cheney is a bit of a stocky guy. Bale would know the exact number, but it ended up being around 40 pounds or something.”

But there was one part of Cheney’s body that Bale was particularly interested in reproducing.

“The other thing Bale found out was that he wanted this solid base to Cheney’s head. Because he felt like Cheney’s head was this power center. His bald head or balding head.”

“So he started to do like muscle lifts with his neck to thicken his neck. All that work was going on while he was doing the character work and the psychological work.” 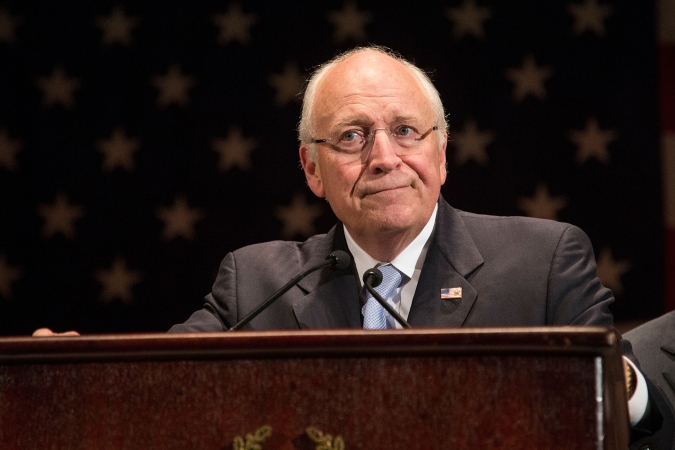 But while Bale’s meticulous performance as Cheney was immediately impressive to behold in pre-production before the camera had even started to roll and only got better when shooting started, McKay soon realized that it could only really be illuminated in the editing room.

“The whole trick to it was that kind of patient slow power that Cheney had. And the way that he turned. And the silences. There was some discussion of that on set, but for the most part that was in the editing.”

“That’s where we framed that properly and slowed down the cut patterns around him, went to close-ups more frequently, to really show this really slow and subtle thing that Bale was doing. He was definitely doing it. And when you were in the room you could feel it. He exuded power. It was an incredible thing.”

“But sometimes on camera that doesn’t show up. When you’re in a scene and it bops around with cuts. So, yeah, the editing was really the key for it. It was fascinating to find the right pacing for the performance.”