How much nicotine is in a JUUL pod? More than you'd think - Metro US
Health

How much nicotine is in a JUUL pod? More than you’d think “It’s impossible to let go once you started using,” Lavandier told NPR. “I’ll tell you — after even an hour and a half or two, I am chomping at the bit to find my Juul.”

There’s a reason for that. JUUL — like other e-cigarettes on the market — are often touted as a healthy alternative to regular smoking because flavored liquid doesn’t contain all of the carcinogens and other chemicals found in cigarettes. JUUL does, however, contain nicotine in its flavor pods. So, how much nicotine is in a JUUL pod?

How much nicotine is in a JUUL pod?

According to the product description for JUUL, the company’s vaporizer uses nicotine salts instead of the free-base nicotine that other e-cigarettes use. What’s the difference? Nicotine salts are a combination of nicotine base combined with a weak organic acid, according to The Conversation, that absorbs like regular nicotine but isn’t as harsh on the throat, leading to a “more pleasant experience” for the JUUL users.

Free-base nicotine, on the other hand, is nicotine with added ammonia, usually diammonium phosphate. This process makes nicotine stronger by making it more “bioavailable” for the body, according to Source Watch.

And many people who use the vaporizer don’t realize how much nicotine is in a JUUL pod “or that there’s even any nicotine,” Jen Bolcoa, a health education coordinator with Jefferson County Public Schools in Colorado, told NPR. “That’s what the research tells us.”

Some studies show that nicotine has positive effects on cognitive function and could help ease symptoms of ADHD.

“We need to de-demonize nicotine,” Ann McNeill, a professor of tobacco addiction and the Institute of Psychiatry, Psychology and Neuroscience at King’s College London, told Scientific American.

The real danger, according to experts, are the other additives in cigarettes. However, ingesting too much nicotine can be deadly, though the exact amount it takes to kill is debated among researchers.

Research also suggests that nicotine can decrease the effectiveness of some cancer treatments. 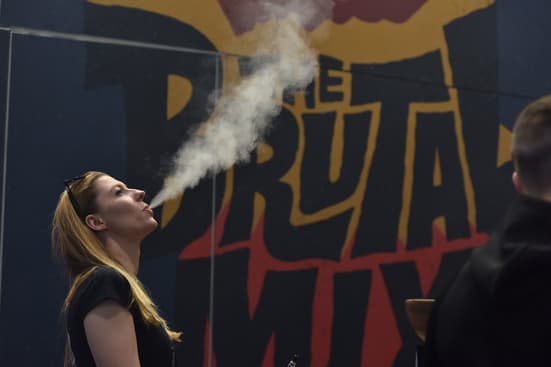 The real danger with nicotine, according to researchers, is the way it affects children in adolescence. The younger they start using nicotine, the more likely they are to get addicted, according to Stanton Glantz, a professor of tobacco at the University of California, San Francisco.

“This is likely because their brains are still developing,” he told Scientific American.

And, unfortunately, there isn’t a lot known about nicotine salts specifically. “We have no research that I could find on nicotine salts that are inhaled, because it’s so new,” Dr. Deborah Liptzin, a pediatric pulmonologist at Children’s Hospital Colorado, told NPR.

The e-cigarette market exploded to $1.16 billion in 2017 — growth that can be attributed, in part, to the popularity of JUUL among younger people.

“I don’t recall any fad, legal or illegal, catching on in this way,” Meg Kenny, the assistant head of school at Burr and Burton Academy in Manchester, Vermont, told VOX of JUUL. “Ninety-five percent of the disciplinary infractions we dealt with in the fall and continue to deal with into the spring are all connected to the JUUL.”

Another problem: We don’t yet know the long-term effects of e-cigarettes and products like JUUL. So, how much nicotine is in a JUUL pod or an e-cigarette isn’t necessarily the problem; it’s that we don’t know how health will affected as these kids grow older.

And the addiction to the nicotine could lead young people to also take up smoking to get their fix. That’s what happened to Lavandier. He now smokes cigarettes along with JUUL.

“My biggest concern,” he told NPR, “is, you know, right now I’m puffing, puffing, happy, worry-free, and then in 20 years I’ll have to explain to my kids why I’ve developed popcorn lung — or some new form of lung cancer,”

“Because I didn’t know what the risks were of e-cigarettes. It terrifies me.”