When you first come to New York, it’s difficult to keep your eyes from drifting up, up and up all the way to the spires of some of the world’s tallest buildings. That New York City’s skyscrapers only started rising up within the last 150 years speaks to the thirst for urban jungle life, and Lower Manhattan’s Skyscraper Museum has chronicled it all in its new exhibition, Skyline.

The new exhibit traces the beginnings of New York City’s urban history that would see it become the world’s first skyscraper city through archival photographs, architectural models, magazines, movies, souvenirs and illustrations. Among the stunning images are the wild stories of how New York became a towering metropolis: the lax regulations that jumpstarted its building boom, the less-than-glorious story of the Empire State Building that was finished at the start of the Great Depression, and how the Twin Towers of the World Trade Center turned from a symbol of endless optimism into a moment of doubt for the future of tall buildings. At the museum’s website, you can change the skyline from decade to decade with interactive digital slides.

While Hong Kong has surpassed New York City in its number of supertall buildings — the Chinese territory has 398 skyscrapers, defined as a building over 40 stories or 150 meters tall, to New York’s 343 — that doesn’t make the Art Deco marvels of Midtown or the towering bastions of industry in the Financial District any less impressive. Here are just three fascinating highlights from the exhibit:

New Yorkers complain about the city being crowded now, but imagine it much smaller, Brooklyn still little more than a shipping depot. In 1880, the city’s population stood at 1.2 million; just 20 years later at the turn of the 20th century, it had nearly tripled to 3.4 million. Business was growing too, sending towers into the sky especially in Lower Manhattan, the hub of international trade. This is what started the upward growth spurt of the city — what let it happen to quickly was the lack of zoning laws governing the dimensions of commercial buildings, the first of which wouldn’t arrive until 1916. 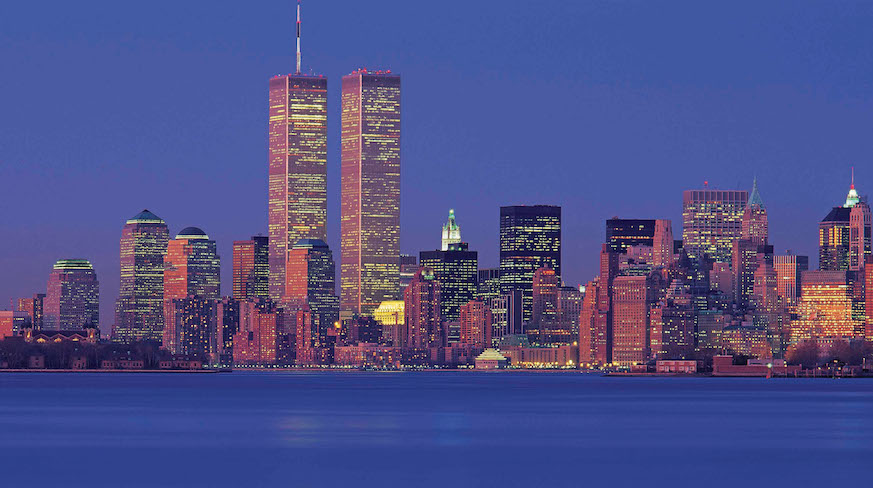 The wonder of the Twin Towers

Among the centerpieces of the exhibit is a scale model of the World Trade Center towers courtesy of the Port Authority of New York and New Jersey. When they were completed in the early 1970s, the Twin Towers were the tallest (110 stories at 1,368 and 1,361 feet) and largest skyscrapers in the world. Their floors were an acre wide, with more square footage than the taller Sears Tower in Chicago. No skyscraper has matched their scale since, and the scale of imagination, fascination with technology and money that it took to make the Twin Towers a reality won’t likely be seen again.

The end of skyscrapers?

After the Sept. 11, 2001 terrorist attacks that brought down the Financial District’s World Trade Center towers, many thought the era of supertall buildings was over. While the decision was made not to rebuild them, next to the memorial site rose the even taller One World Trade, with a cluster of smaller towers around it. Elsewhere, Downtown Brooklyn is a hub of sky-high development; in all, 13 new supertall structures have either been proposed or are under construction in the city.

Skyline is on display now through January 2019 at the The Skyscraper Museum, 39 Battery Place. Open Wed-Sun, noon-6 p.m.; tickets are $5. skyscraper.org