I infiltrated an exclusive NYC dating club and this is what happened... - Metro US
New York There was plenty of comfortable seating for groups to chat. Photo: Luc Kordas

I’m single. Single and caught between “I just want a glass of wine and a good make out” and “someone who makes me laugh, please think I’m special!” feelings that typically wash over one as the post-breakup months roll by.

Despite my fearless reputation among friends, I was nervous as hell. Red-lipped and wearing heels, I went to Ballroom Romance, a private event, hosted by the dating club Social Concierge. The singles mixed at The Jane Hotel, 113 Jane Street in the West Village, and Social Concierge bills itself as being pretty picky with its “eligible members” who gather every two weeks to “Drink, Network, Flirt.”

“Social Concierge parties attract the City’s most eligible 20/30 something singles,” the website reads. “Our members are well-educated, driven, attractive and sociable.”

Sounds amazing. I mean, I went to college. I have a job and I’ll talk to anyone, but it still sounded like they look for well-paid corporate types who don’t curse in public. I’m just not that girl. But I was ready to disconnect from the dating apps and try something new.

On a first date I once had, the guy compared dating apps to slot machines; the human element is removed, and there is no real indicator of chemistry. Faces just pop up and either fade left or right. We never had a second date, but the analogy was on-the-nose.

Social Concierge offers an alternative, a chance to see a person, hear their voice, smell their breath (for better or worse) and let them buy you a drink. Not every great conversationalist can write a killer profile. I mean, I give good text, but this levels out the playing field, right? Social Concierge’s dating event puts the natural human flow back into dating. I was game to check it out.

The event began at 7 p.m. with a complimentary glass of wine. My fashionably late 8 p.m. arrival not only made me miss out on the booze, but it might have slashed my chances of getting a phone number. The ratio of women to men seemed fairly even, though, a happy surprise for a dating event. By the time I arrived, everyone seemed either paired off or already sitting with a co-ed group and I wasn’t sure I wanted to be the interloper. They had already gotten comfortable if they were already sitting in a group, I assumed. The women sitting in those cozy conversations seemed to have already picked out their guys and sunk their hooks into them.

That’s the stereotype, right? Women are vicious to other women. We’re biologically territorial. I was fully expecting stereotypical hunting behavior, and I wasn’t feeling up for confrontation. So instead of approaching a mixed XX-XY group, I put my coat and bag on a couch where a group of friendly-looking 20-something women were gathered, and asked if anyone had been to a mixer before. Two had and two hadn’t.

“If you don’t belong here, then neither do I,” Kaitlyn, a fellow first-timer, replied with a smile.

Her friend Katie explained that she joined for the monthly fee of $25, submitted her photo, provided her employer’s name (Social Concierge verifies by social media or a phone call to the applicant), but said that she was entry-level — not the rich mover and shaker I thought members had to be.

All the women I spoke to that night weren’t stereotypical crabby competitors. I could actually see my fellow females’ smiles soften as we realized talking to each other was a breather from the hunt in the urban jungle. We belonged to an awkward sisterhood based on the undeniable truth that dating is hard, and we all dove in (understandably) with a case of the nerves. We were in the trenches together.

Except perhaps for the alpha queen in the ladies’ room regaling us with a tale of her victory after she poached a man — actually pulled him away from the woman he was speaking to. I applauded her lady-balls with a mix of pride, envy and fear.

Just then, the Metro photographer, Luc, texted me to say he arrived, so I walked to the entrance to meet him… just as a woman was putting her number into his phone.

He literally walked in and already got a number!

Fortified by knowing at least one person in the room, I procured a glass of Malbec and got ready to mingle with the opposite sex. I looked for a “crowd mixologist,” a person Social Concierge billed as a “bold character” with a corsage who was supposed to make introductions every five minutes to keep the lonely hearts club swinging. I had never been to a singles mixer before, but from what I’ve been told, the mixologists are unique to Social Concierge. Having a designated “wingman/woman” at the ready is a nice touch, especially in New York.

New Yorkers live in a huge city, the hippest club around, surrounded by 8 million other people, but we often times avoid interaction. We look up at the ceiling on the subway car. We never make eye contact with the person walking the opposite way on the sidewalk. Smartphones and social media are our refuge.

The only corsage I found was pinned to Ben Goodman, the marketing and events consultant for Social Concierge, who introduced me to Jackson.

“This is my friend, Jackson,” Ben said before someone else asked for his attention.

Not a grand introduction, but it worked. The ice was broken, as they say.

Ethically, I had to disclose to Jackson and the others I spoke to that night that I’m a reporter and planned to write about my experience, which kind of took away some of the fun. I really didn’t want to talk about me and if I participate in the sex and drugs about which I often write.

Here’s the thing: Plunk me down in the middle of a riot and I’m a cool customer. Catch the gaze of a super handsome man on the second floor? I do the only rational thing one would do when a cute guy is in sight — run away.

I decided to head to the bar area, the smallest space in the joint with the most amount of people. I will literally be bumping into people, I thought, so maybe I’ll be able to chat easier without feeling like a lone gazelle on a vast plane in the Serengeti. I ran into a pretty confident guy, Leo, who approached me by the bar, where the majority of folks seemed to gather. He told me people call him the “Minister of Fun,” which actually sounded like a line I heard while on the dating app Coffee Meets Bagel. Since I couldn’t remember how the CMB conversation ended, I stopped myself from saying, “Hey, are you that guy from that app?”

Leo seemed to be the only participant with a solid game plan. Like, he knew the answers to where to move, what to say when — not calculated, but like he had crib notes. He even had personal business cards (the “fun” ones, he called them). When he stepped aside to check on his friend, I started joking around with Social Concierge’s photographer, Matt. We were having a laugh riot when Leo came back, so we ended up being a trio of talkers. During the course of conversation, Leo told us he previously hired a professional wingman, Thomas Edwards, who — for a few thousand dollars — acted as a personal dating coach.

Here’s an example of what you’ll have to deal with: You know the term “resting bitch face?” We should probably start our lessons working on what my co-worker affectionately called my “resting murder face” while giving someone my undivided attention. I’ll let the photo speak for itself. 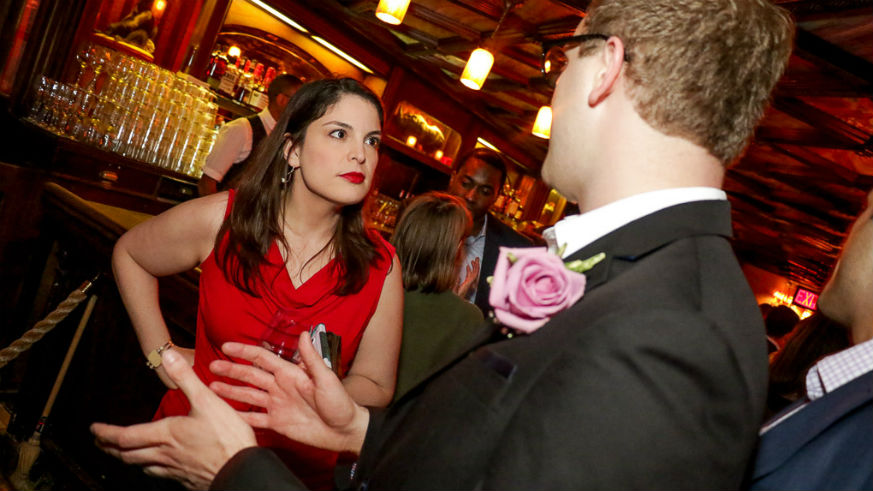 A lot of people seemed to do really well. There were maybe one or two guys sitting off by themselves and, yeah, me sitting off by myself for a few moments, but everyone seemed comfortable in the space. Biggest indicator of a good time? No one was buried in their phone.

Drinks weren’t cheap, but the experience as a whole was positive; clusters of men and women chatting away with easy smiles.

I even caught two singles leaning in for an on-the-lips smooch as they parted. Social Concierge success!

By the end of the night, I had also spoken to a neurosurgeon who kept looking around during our banter for his friend, his friend — an (as he exclaimed) “ass doctor” who was about three and 1/2 sheets to the wind and hilarious — and Zach, who works in public relations. Adorable blue-eyed Zach told me in between hiccups that DMX and Ja Rule are his clients, but he couldn’t remember my name and insisted (multiple times) that I work for another New York publication, even as he held my business card in his hand.

I didn’t hear from him, though I did have a few inbox pings the next day.

I would do a singles mixer again, because it is so outside my comfort zone (which I love) and the human interaction is much cooler than swiping right with a pint of Halo Top in my lap. Although, I will say I missed having some of the stats available on dating apps, like age. Yes, it’s just a number, but I want to know if the person I’m talking to will get my NKOTB reference or if they need it spelled out Backstreet-style.

For reference, my first concert was Debbie Gibson and she recently replied to one of my tweets. Highlight of 2017, thus far.

@KimESTAqui Awww, thank you ?. Laying low and so looking forward to 2017! Woo hoo! Have a great NYE ?

But, I admit it: I choked. I got nervous and it showed. I didn’t breeze into conversations the way I would have on a normal night out with friends, but I have learned that I’ve been giving off a “don’t come too close” vibe — and I have “resting murder face.” But I count life lessons as a win.

I think I’ll be a powerhouse in my next mixer. Everyone deserves a mulligan. My priorities right now don’t call for any long-term soulmate searching (ask me again tomorrow), but I’m for sure going to lead with that Debbie Gibson tweet. That was rad. Leo’s not the only one with a plan.

As the crowd dwindled, I informed Luc it was time for some serious drinking and dancing, so we headed upstairs to the club and outdoor patio. And that’s where I stop writing, because I was off the clock and some things get to be mine.

The next Social Concierge party is scheduled for Thursday, May 18, 8 p.m. in Chelsea.