I tracked my sleep for a week, here’s what I learned - Metro US
Health

I tracked my sleep for a week, here’s what I learned I’m a very active person, always have been. When my fingers aren’t typing away, you can most likely find me exercising (and thinking about my fingers typing away). Words and workouts — that pretty much sums me up right there.

Since I’m constantly moving — besides when I’m at work, in which case my fingers are typing away — I add “get more sleep” to my list of New Year’s resolutions every year. And every year, I hopelessly fail.

But in 2018 I swear I’m turning over a new leaf. I will try to make my head hit the pillow at a reasonable time so that I can take on busy days with a confident stride as opposed to a slow, semi-stable step.

So when I was gifted a Fitbit during the holiday season — a Fitbit Blaze to be exact — it seemed appropriate that on top of tracking my workouts (something I’ve done since college) I’d start tracking my sleep too. 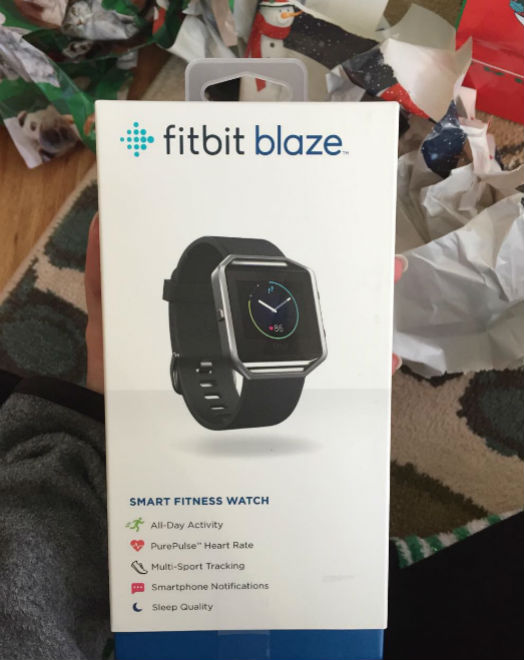 I did this over a whole work week, and here’s how it all went down.

I spoke with Dr. Daniel Barone, Assistant Professor of Neurology at Weill Cornell Medical College and author of soon-to-be-released “Let’s Talks About Sleep,” about the sleep stages, which you can learn more about on the National Sleep Foundation website.

Each night you cycle through what he referred to as the “five stages of consciousness,” the first three of which are non-rapid eye movement (NREM). There’s N1 or “light” sleep (which he compared to falling asleep on the subway), N2 or “regular” and/or “moderate” sleep, N3 or “deep sleep” (which he said occurs in the first half of the night), REM (which occurs four or five times during the second half of the night and is where dreams occur) and awake periods.

Fitbits track sleep stages using a combination of your movement and heart rate patterns and categorize them into light sleep, deep sleep and REM, as well as these awake periods.

Dr. Barone said that Fitbits most likely combine stages 1 and 2 into “light sleep” for their estimates.

I ended up working from home on Monday because I was sick (flu season will do that to you). Since I didn’t have to do my usual commute, I got about two more hours of sleep than usual.

Besides getting out of bed periodically during the night to go to the bathroom and kick my cat out into the hallway — he happens to think my head is a pillow — I felt well-rested.

After syncing my Fitbit, the numbers seemed accurate — it said I went to sleep at 11:24 p.m. and woke up at 8:30 a.m. The chart on the Fitbit app looked like this: 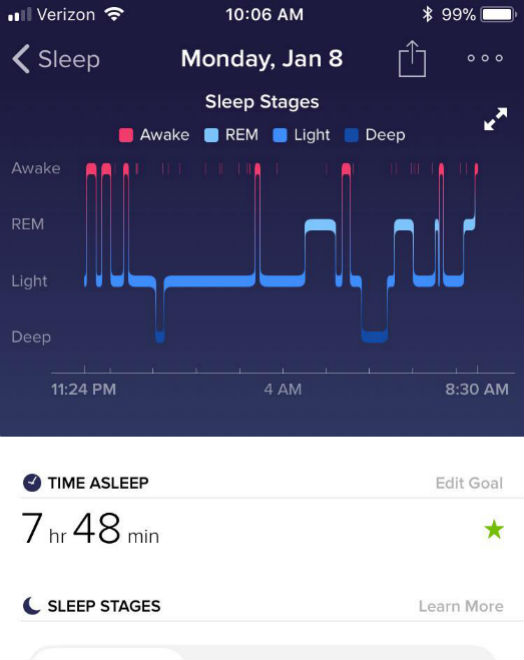 When you scroll through each stage on the app, it also gives you information about each, which I found super informative.

For these hours, my Fitbit recorded sleep patterns instead of stages because it couldn’t get a consistent heart rate. (Only slightly terrifying.)

According to the website, this could have been for a number of reasons: I could have slept in a position that prevented my Fitbit from getting a consistent heart rate (possible), I could have slept for less than three hours (not a chance) or my Fitbit’s battery was low (not so sure).

It recorded my time asleep, “restless” and awake: 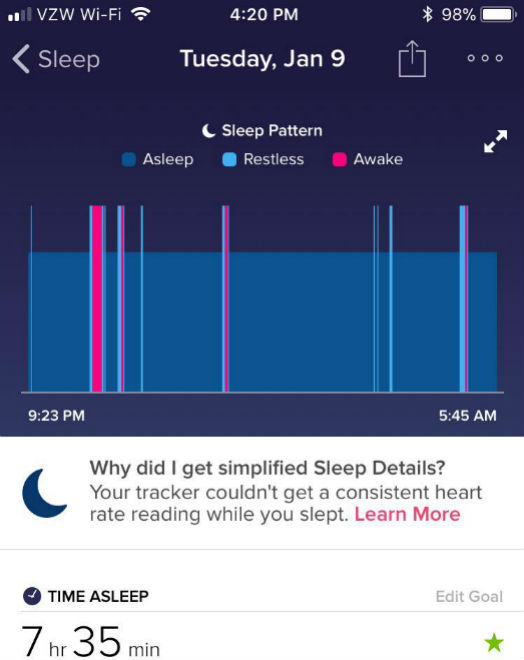 Regardless, I learned that you can actually edit your sleep times if the numbers are off, and the data will shift accordingly.

I was relieved to find that my Fitbit registered sleep stages again. (What a way to start the morning, right?) I did notice, though, that the numbers were off — it said I got up at 6:35 a.m. instead of 5:45, so I had to make adjustments.

Apparently I’m not so great at this because I got sleep patterns (again!). I also had to make adjustments — it said I fell asleep at 8:30, but at that point I was very actively eating dinner. (Well, that’s awkward.)

This was my last chance to get it right, so I made sure to wear my Fitbit extra snug on my wrist (even though the website tells you that your band should be “secure but not too tight”). And guess what? It worked!

I stayed home sick again (damn you cold), so I slept in later before logging online. Again, I had to adjust the times I went to bed and woke up.

Note: It turns out that what I had was a 10-day virus, but we won’t talk about that. But I will share a helpful fact I learned: Dr. Barone told me during our interview that if you get less than five hours of sleep before you’re exposed to the common cold virus, you’re at bigger risk of getting it. (Duly noted.)

Lesson 1. In general, I don’t get enough sleep

I didn’t need a Fitbit to tell me this. During a normal work week, I don’t get enough sleep for a number of reasons. Given that I were to work from home, I’d get an extra two hours, but is that really worth being sick? (No.)

Dr. Barone discussed with me that, in simple terms, a “good night’s sleep” can be defined as getting the recommended 7 to 9 hours (according to the National Sleep Foundation) and “feeling rested the next day.”

“Equally important is how good a person feels their daytime alertness, mood and problem solving skills are [after a night’s sleep],” Sarah Anne Reynolds, a nurse practitioner also in the Neurology Department at Weill Cornell Medical College, told me.

Looking at my data, I seemed to spend more than half of my sleep in the “light” stage.

According to Reynolds, this is normal since my Fitbit considers groups stage 1 (light) and stage 2 (moderate) into light sleep. She went on to tell me about the approximate percentages of time an adult spends in each stage:

According to my data, though, I’m not spending that much time in deep sleep — I recorded 10 percent and lower on the nights that my Fitbit was able to detect a consistent heart rate (yeah, still terrifying).

When I asked Reynolds about it, she said, “I think a good point to keep in mind is that the sleep stages are just one of many things that we look at when we are evaluating a person’s overall sleep health.” She also referred me to a study that found that a Fitbit is only about “49 percent accurate in detecting deep sleep.”

Lesson 3. It’s harder than it looks

I didn’t think tracking my sleep would require so much editing.

Dr. Barone said that Fitbits aren’t perfect in their measurements. “The one good thing about this technology is that it gets people interested in their sleep health,” he said. “But in terms of the scientific data, it’s not there yet.”

To get a proper screening, he said you should go for an overnight sleep test.

“A sleep study done in an accredited sleep lab also measures other very important things, which affect sleep such as apnea (pauses in breathing), abnormal movements and the impact of these on the sleep architecture,” Reynolds added.

The Fitbit website even acknowledges this, stating that the “gold standard” for measuring sleep stages is going to a lab, but “your device can estimate your sleep stages in a more comfortable, convenient way.”

Bottom line? I’ll be wearing my Blaze when I workout for sure, but when my head hits the pillow at night, I’ll most likely be Fitbit-free. Don’t get me wrong though, I’m still sticking to my New Year’s resolution.

On top of going to bed earlier, Reynolds suggests shutting off electronic devices 30 to 60 minutes before bedtime because “the light and stimulation disrupts sleep.” Looks like I’ve found my next experiment.