Forget about hygge: This summer, it’s all about relaxation — and you’ll achieve peak relaxation when you follow a new wellness trend out of Finland known as päntsdrunk.

A new book by Finnish journalist Miska Rantanen reveals that päntsdrunk is pretty much what it sounds like: Drinking at home without pants.

According to the synopsis of his new book, päntsdrunk is “a path to solitary relaxation, recovery and self-empowerment to help you face your future challenges.”

To practice it, all you have to do is “peel off your work uniform down to your underwear,” according to Rantanen. “Place savory or sweet nibbles within reach, by bed or sofa, alongside remote control and devices to access social media. Open a bottle or can of alcoholic beverage” and enjoy.

Is päntsdrunk really a Finnish word?

Not exactly. Päntsdrunk is Rantanen’s clever interpretation of kalsarikannit, an actual Finnish word introduced by the country’s Ministry of Foreign Affairs. Prounounced cal-sar-y-cuhn-eet, kalsarikannit is officially defined as “the feeling when you are going to get drunk home alone in your underwear with no intention of going out.”

There’s even an emoji for kalsarikannit, so you know it’s legit. 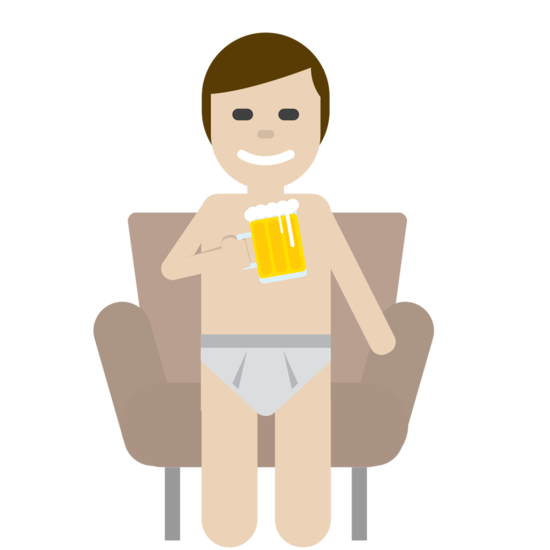 “We have very long winters,” one Finn told a Financial Times reporter of why kalsarikannit is a thing.

Makes sense: Who wants to go out when it’s bone-chilling cold out? Just stay home and get toasty — and toasted — in your skivvies.

And it definitely seems to be working: Finland is ranked as the “happiest country in the world” for 2018, even though they’re one of the highest-taxed groups. They’re also the least corrupt, most socially progressive, safest and best governed country in the world.

“In the Nordic countries in general, we pay some of the highest taxes in the world, but there is wide public support for that because people see them as investments in quality of life for all. Free healthcare and university education goes a long way when it comes to happiness. In the Nordic countries, Bernie Sanders is not viewed as progressive – he is just common sense,” Meik Wiking of the Happiness Research Institute in Denmark told The Guardian.

And pantless drinking can’t hurt, either.