Is intermittent fasting healthy? What you need to know - Metro US
Health

Is intermittent fasting healthy? What you need to know Besides the keto diet, intermittent fasting has been the talk of the health sphere — and the internet — as one of the most popular diets in recent years. It entails alternating periods of fasting and eating. The bottom line is this: it’s not necessarily about what you eat. It’s about when you do. But, is intermittent fasting healthy? Recent studies have shown possible risks despite reported benefits. Here’s what you need to know.

Cara Harbstreet, M.S., R.D., told Shape.com that intermittent fasting isn’t classified as a diet. It’s a “means of cycling between periods of fasting and eating, following a specific and predetermined pattern. People may be drawn to this form of dieting because it does not specify what to eat.” (Whereas diets such as Whole20, paleo or keto have strict guidelines for food consumption.)

The 16:8 method: This entails eating within an 8-hour period and fasting the rest of the day. Prevention.com calls this “LeanGains.”

The warrior diet: Here, you fast for 20 hours a day and eat one large meal every night.

Eat-stop-eat: Prevention.com describes this method has fasting for one or two full days a week and eating normally the remainder of the week. (These fasts are a 24-hour period. For instance, after dinner on Tuesday, you’d refrain from eating until dinner on Wednesday night.)

Two-meal day: This requires that you eat just two meals a day, either breakfast and lunch or lunch and dinner.

Alternate fasting: This type of fasting entails less of a routine, switching between periods of “consuming zero-calorie foods and beverages and actual eating,” reported Good Housekeeping. It differs from “eat-stop-eat” because these periods of fasting can last up to a week. 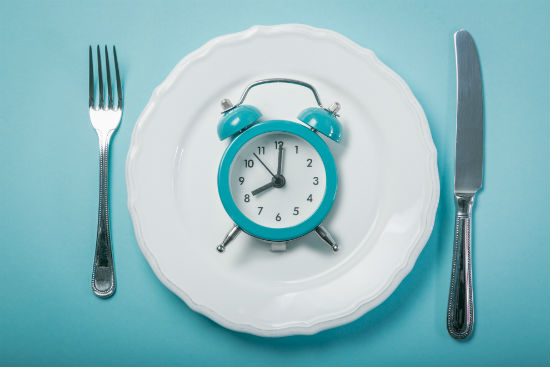 In a new study done on mice published Sunday, researchers from the University of Sao Paulo, Brazil, found that intermittent fasting could leave people at risk of developing type-2 diabetes.

Mice fasted every other day for three months, and the lead scientist of this study, Ana Bonassa summarized, “This is the first study to show that, despite weight loss, intermittent fasting diets may actually damage the pancreas and affect insulin function in normal healthy individuals, which could lead to diabetes and serious health issues.”

As Jaclyn London, M.S., R.D., C.D.N., for the Good Housekeeping Institute also pointed out, a recent study on humans found that LDL “bad” cholesterol increased in a group of people who tried out intermittent fasting (increased LDL is linked to type-2 diabetes).

Is intermittent fasting healthy? The answer isn’t black and white — there are proven benefits as well as potential risks.

“I have received thousands of messages over the years from people who have done the 5:2. Many have reported fantastic results, others have struggled,” Mosley wrote for The Daily Mail last week in response to the University of Sao Paulo study, which he pointed out did not look into the 5:2 method of intermittent fasting. “None has reported significant side effects beyond the usual things you encounter when dieting, such as hunger, irritability or headaches.”

Karen Ansel, M.S., R.D.N., told Shape.com that the problem with intermittent fasting is the lack of food restrictions that an actual diet spells out for you. “That means you could literally eat junk during your non-fasting periods, which isn’t exactly a recipe for good health,” she said.

“If you do choose this kind of diet,” Ansel contined, “it’s key to make sure that you eat as healthfully as possible to make up for the nutrients you may be missing out on during fasting days.”

As the above studies suggest, intermittent fasting could increase your risk of type-2 diabetes. Ultimately, researchers have concluded that more research needs to be done.

Intermittent fasting isn’t a fit for everyone

So, is intermittent fasting healthy? Yes and, like all lifestyle choices, no. It can have positive benefits towards your health, but there are some people who should avoid giving it a try altogether.

Harbstreet warned that anyone with an active eating disorder, orthorexia or “other disordered eating behaviors” should refrain from intermittent fasting of any kind. She said that intermittent fasting “can be especially challenging for those who become preoccupied with food or struggle with rebound overeating after a period of fasting.”

“If you find that you can’t get your mind off food and end up eating more than you would if you had not fasted, it’s likely that intermittent fasting is doing more harm than good,” Harbstreet stressed. “That goes not only for your health but also your relationship with food and how you nourish your body.”