Is The Upside a remake? Based on a true story? Kevin Hart and director Neil Burger talk us through it - Metro US
Movies

Is The Upside a remake? Based on a true story? Kevin Hart and director Neil Burger talk us through it

The Upside star Kevin Hart and its director Neil Burger have broken down just how close the comedy drama is to The Intouchables, the 2011 French film that it is a remake of.

“The essence is the same,” Burger explains to Metro. “It is this guy who is totally unqualified taking care of this wealthy guy with quadriplegia. So it is the same in that way but it has a different spirit to it.”

“It has a different journey to it. It has more of the characters’ back story and their lives before. It has a different vibe to it. So it is related to it. We wanted to take what was great from that movie and go even further.”

Is The Upside based on a true story?

“Once we had Americanized it I knew it would be a new thing. I just wanted to service the script. The French movie has its own way of doing it, but this story is different, it has a different journey and a more intricately built story to each of the characters. So I am building a tone and style and a visual that takes on a life of its own.”

Burger actually originally turned down the chance to direct The Upside because he didn’t want to remake such a beloved film and story.

“They’d actually come to me a year earlier and I said no because I didn’t know why they wanted to remake this international hit film. It wasn’t the movie I wanted to make. I didn’t want to remake movies.”

“But when they came back in 2016 they had changed it. It was different. And I suddenly saw how it could speak to what is going on in America.”

“Just in a sense that there is so much division and this is about 2 people who are finding common ground and crossing those lines of division, whether they be race or wealth or ability. And doing it through small acts of respect and compassion. I wanted to tell that story.”

Burger was so hooked by that story that he immediately overlooked his original aversion to remakes.

“I stopped caring about the issue of doing a remake. Especially since The Intouchables hadn’t done such great business in America. So I thought we could translate it to America and speak to what is going on right now with humor, drama and pathos. In a way that allowed us to see the humanity of the characters while creating grand entertainment.”

The Intouchables itself was inspired by the true story of wealthy businessman Phillipe Pozzo di Borgo and his French-Algerian caregiver Abdel Sellou, and while Burger didn’t work with the duo, Bryan Cranston spoke at length to Phillippe.

“They weren’t involved. Though Bryan did speak to Phillippe Pozzo di Borgo, who it is based on. He spoke to him at length. Phillippe gave Bryan his blessing and really important insight and information.”

“We all did a huge amount of research on this disability and what it does to someone physically, mentally and emotionally. We met caregivers and numerous people to help us.”

But what was Kevin Hart’s preparation for The Upside?

“I watched the film after the script came,” Hart tells Metro. “Then I went back and educated myself on it. I just wanted to know the movie, be familiar with the actors that had done it, so that when the conversation comes about you’re not blindsided or speaking from an ignorant space.”

“We are not mimicking what they did. We are not doing an impression of those actors, who did an amazing job in that movie.”

“We knew that we are doing an Americanized version, modifying it for today’s times so that we can address some issues, so we wanted to be able to bring our own cadences and performances to the movie. We had to take a step back to be able to do that.” 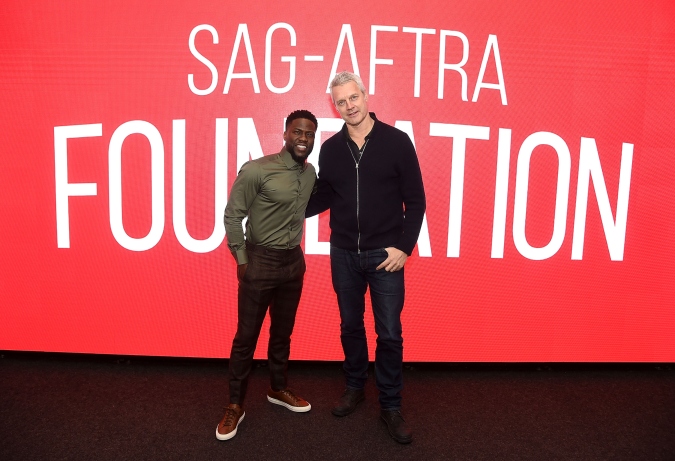 Shortly after it premiered at the 2017 Toronto Film Festival, The Upside had to contend with an issue that was firmly out of their control, but which completely threatened its released.

That’s because The Upside was originally set to be distributed by The Weinstein Company. However, the sex abuse allegations against Harvey Weinstein led to the dissolution of the studio, so The Upside had to find a new home, which it eventually found in STX Entertainment.

“We were raring to go last year and then boom,” Burger explains. “The Weinstein Company had controlled the North American distribution for the original and had the remake rights. At a certain point the producers came to me and I was on so we were off and running.”

Burger never believed “the film was dead,” though.

“I thought we would get to this point. For a while it looked like it might happen faster. You want the film out there, but as a filmmaker that is out of your control. We had this wonderful premiere at Toronto, so the film was out there, sort of.”

“I was working on a whole handful of other projects as well. We starting shooting in February, finished filming in April, then it premiered in September. Which was such a quick turn around. So I was working on a new project when the release was stopped.”

The Upside is in theaters now.