By Giuseppe Fonte and Valentina Za
0
comments
Posted on March 8, 2021 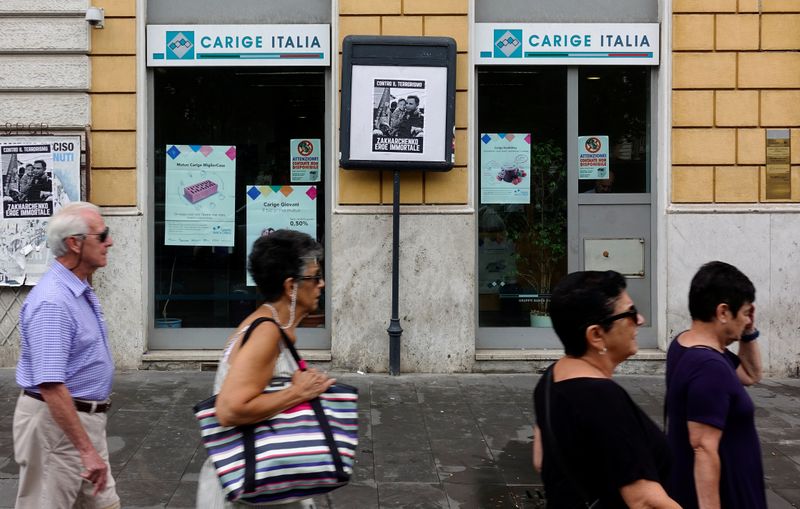 People walk past a Carige bank in Rome

ROME (Reuters) – Rome is in discussions with the European Commission about extending a state guarantee scheme which could help Italian banks shed around 30 billion euros ($36 billion) in bad debts this year, two sources close to the matter told Reuters.

Banks are expected to face a surge in problem loans once governments withdraw measures deployed to keep firms afloat through the pandemic.

Talks to renew the ‘GACS’ guarantee scheme for one year from its expiry in May began earlier this year, one of the sources said, adding negotiations were expected to continue at least until the end of March.

The two sources said there would be only minor changes to the scheme if it were extended, dashing hopes in Italy’s financial industry that it could be widened to include “unlikely-to-pay” (UTP) loans.

UTP loans, unlike bad loans, are not yet in default and can be recovered by returning borrowers to health, a much more complex process than clawing back money through the courts.

Italian authorities are concerned about the difficulty of rating UTP loans and the possibility they could be dealt with as defaulted loans by rating agencies and investors, effectively tilting borrowers over the edge.

Italy introduced the ‘GACS’ scheme in 2016 to help banks deal with impaired debts totalling almost a fifth of total lending after a deep recession.

After a slow start, it has allowed Italian lenders to offload around 85 billion euros in defaulted loans, according to bad loan specialist Banca IFIS.

The Treasury renewed the measure in May 2019 for two years, saying at the time it could be extended for a third year provided EU Competition authorities allowed it.

Greece is also negotiating an 18-month extension to its ‘Hercules’ programme, which replicates the GACS model and is due to expire in April.

Under the GACS programme, banks can buy a guarantee from the Treasury to back the least risky notes when selling bad loans repackaged as securities. This helps to fetch a better price and minimise the losses banks suffer when selling such loans.