If you are of a certain age, the music that producer and rapper Jermaine Dupri has created probably soundtracked your childhood in one way or another. At least that’s what I told him when I got the chance to speak with him over the phone.

From the ’90s through the early 2000s, it was just unavoidable. Dupri first hit it big producing hits for the likes of Kriss Kross. He then used his success to start his wildly successful label, So So Def Recordings. The label has had an incredible roster as well as managed artists over the years, like Usher, Mariah Carey and TLC, who have consistently dominated the charts. Last year, the Atlanta native was the second hip-hop artist to be inducted into the Songwriters Hall of Fame (the first being Jay-Z). Given this huge achievement, Dupri teamed up with WE TV to film a documentary leading up to his induction, but then quickly decided that it would be better to take a look through his entire career and 25 years of the So So Def record label. The resulting hour-long film, “Power, Influence and Hip-Hop: The Incredible Rise of So So Def,” premieres this Thursday, July 18, at 10 p.m., and features a who’s who in the world of hip-hop and R&B.

“Hip-hop is like fast food: You get it, you love it, and it’s gone,” – Jermaine Dupri 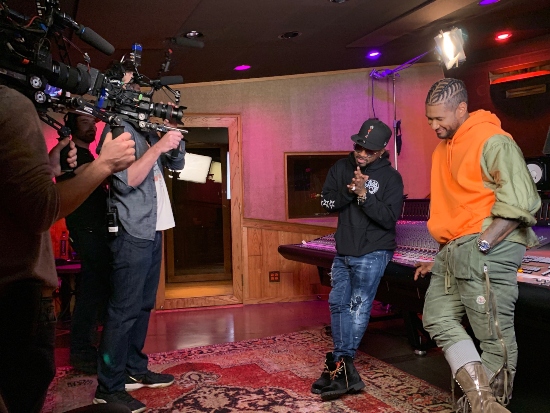 In the new documentary, you say that you made your first beats on a drum machine that you bought on layaway. That’s such a good example of the do-or-die drive that you had to make things happen since there was such a time limit. Now, you are celebrating 25 years of the label you started, So So Def Recordings. It must be crazy seeing how hard you worked to get here.

Jermaine Dupri: Well, the creation of it — you don’t actually get the opportunity to see it the way it is once it’s made. They’d be calling asking for pictures and I was annoyed! Some of this stuff, I think that people had already seen it! That’s the one thing that I had to remove myself from is the fact that — and a lot of my artists have to remove themselves from as well — a lot of this information that we all feel everyone is privy to knowing, they don’t know this information. It’s interesting. Angie Martinez is a person that calls herself “The Voice of New York.” I would have thought she knew my whole story. I did an interview with her and she was like, “I didn’t know that Kriss Kross weren’t rappers!” There’s so much stuff that’s in there that people didn’t know. That’s the part where I have to start stepping back from and allowing the doc to do what it’s gotta do. It made me realize that some of my life I might have hindered myself by just taking for granted that people already knew it as opposed to making sure that this stuff was more concrete and in people’s faces.

You are owed a lot of credit for putting Atlanta and Southern rap and R&B on the map. Is it humbling to see Atlanta as being one of the cultural meccas of the world now?

Jermaine Dupri: Yeah, but it’s a lonely happiness. I remember a time when Atlanta had nothing. I remember a time when the BET Awards were talking about coming to Atlanta and I was lobbying for them to come to Atlanta. Once they got to Atlanta and the BET Awards came and left, it didn’t seem like I was the person saying it. It seemed like it was a million other people saying it. So it’s a very lonely happiness to see all of this stuff going on, because a lot of people act like they don’t remember me being the only person championing this stuff.

In the documentary, you talk about how Atlanta was like Switzerland between the East Coast–West Coast beef of the ’90s. What was going through your mind during that time? Why did you try to broker peace between the coasts?

Jermaine Dupri: Honestly, I wasn’t paying attention to it! You know what I mean? That’s really how the nature of Atlanta is. That’s the nature of how I’ve moved through this industry for so many years. I never got caught up in it and I actually didn’t think that the beef was that serious. But I made a record with Freeway and Jadakiss called “Hate in Your Blood.” I wanted Freeway to do the hook and I wanted Jada to put a verse on the song. At the time when I did the song and had both of them come to Atlanta, at separate times, they was beefing with each other! I was aware of it, but I wasn’t paying any attention to it. I was so focused on getting the song done that I wasn’t even thinking, “These guys might not even want to do this because they’re beefing.” When I’m into my music, I’m not even thinking about, what’s the public thing that’s going on?

You don’t focus on the spectacle, you focus on making the music.

In the documentary, you talk about some of the artists that you owe your career to, like Kriss Kross, Da Brat, Mariah Carey and countless others. Are there any specific songs or albums that you look at as being So So Def’s biggest achievements?

Jermaine Dupri: No, not really. I don’t think so. The majority of my records and the majority of my career has been questioned and a question mark to others [as to whether] it’s going to work or not, and a lack of belief. Me seeing that prior to a lot of my music coming out, I never really feel like it’s going to work. I’m always going into it thinking, “Man, I hope this works out.” Because people are always looking at me and acting like this ain’t goin’ to pop.

You and Jay-Z are the only two hip-hop artists inducted into the Songwriters Hall of Fame. While this is an incredible honor, shouldn’t there be more rappers inducted?

Jermaine Dupri: Nah. The reason why hip-hop hasn’t been inducted into the Songwriters Hall of Fame is because there are not really a lot of artists out there who have had 20-plus-year careers. You had to have been writing records for 20-plus years, that’s one of the formalities for you to get into the Songwriters Hall of Fame. Hip-hop is like fast food: You get it, you love it, and it’s gone. It hasn’t been something that people can do and continue to keep doing, you know?

You say at the end of the doc that you are going to make the biggest album of all time within the next 25 years. Are you working on that album right now?


Jermaine Dupri: Always! I say that because every time somebody interviews me or talks to me — just like you, you started this conversation by saying, “It’s not every day you speak to someone that shaped your childhood.” I didn’t know I was shaping your childhood! You know what I’m saying? I don’t know what record it’s going to be. I don’t know who the artist is that’s going to make this album or this music that I’m talking about. But I do feel like if I shaped your childhood, if I made two of the biggest R&B records of our time with “The Emancipation of Mimi” [Mariah Carey] and “Confessions” [Usher] — if I have done those things, then I definitely feel I have the know-how and energy to create one of the biggest albums that music has ever seen.

Check out the trailer for ‘Power, Influence and Hip-Hop’ starring Jermaine Dupri below.