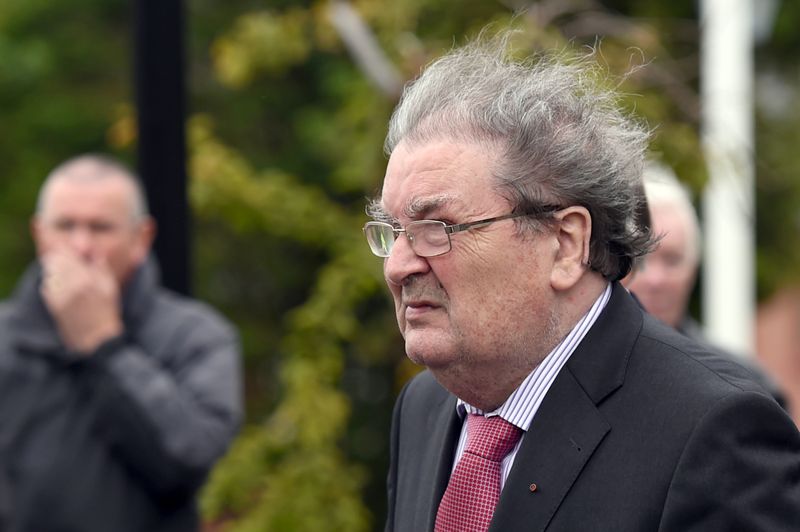 BELFAST (Reuters) – John Hume, the Roman Catholic architect of Northern Ireland’s 1998 Good Friday peace agreement who won the Nobel Peace Prize for his role in ending 30 years of sectarian violence, died on Monday at the age of 83.

World leaders and former leaders praised him as a “political titan”, visionary and hero for the Irish people.

He died in a care home in his native Londonderry in the early hours of Monday, his family said in a statement.

“John Hume was a political titan; a visionary who refused to believe the future had to be the same as the past. His contribution to peace in Northern Ireland was epic,” former British prime minister Tony Blair, in office at the time of the Good Friday accord, said in a statement.

Former U.S. President Bill Clinton, who described Hume as a friend, praised him for “marching on against all odds towards a brighter future for all the children of Northern Ireland.”

Hume in 1968 joined a movement to protect the civil rights of the province’s pro-Irish Catholic minority, fighting against discrimination by the pro-British Protestant majority in everything from housing to education.

As leader of the moderate Social Democratic and Labour Party (SDLP), Hume was an important advocate of non-violence as fighting erupted between Irish nationalists who wanted a united Ireland and pro-British forces, including the British Army, who wanted to maintain the region’s British status.

“Right from the outset of the Troubles, John was urging people to stick to their objective peacefully and was constantly critical of those who did not realise the importance of peace,” Trimble told BBC Radio Ulster on Monday.

In a pivotal breakthrough, Hume in 1993 took part in pioneering talks with Gerry Adams, who was at the time the leader of the Sinn Fein party that was then the political wing of the guerrilla Irish Republican Army (IRA).

The talks helped pave the way for a joint initiative by the British and Irish governments in 1993 that spawned a peace process and an IRA truce in 1994 – and ultimately paved the way for the watershed Good Friday accord four years later.

“When others were stuck in the ritual politics of condemnation John Hume had the courage to take real risks for peace,” Adams said in a statement.

(Reporting by Conor Humphries in Dublin and Ian Graham in Belfast; Editing by Kevin Liffey, Mark Heinrich and Timothy Heritage)