Jon Glaser talks his all-consuming love for all things Gear Comedian Jon Glaser has a knack for creating characters with all-consuming and life-derailing obsessions. Whether it is the preservation of a fragile ego with his legendary character “Jon” from the witness protection drama and reality TV show hybrid Delocated or his tireless pursuit to rid the world of werewolves in his recent turn as Neon Joe in Adult Swim’s Neon Joe Werewolf Hunter, Glaser understands the powerful hold of fixations no matter how dumb they can be.

That’s all part of the fun of course, and with his latest show Jon Glaser Loves Gear on truTV, Glaser has come the closest that he ever has to actually portraying a semi-realistic version of himself in front of the camera. While most of the characters he has created in the past have been based on ridiculous concepts, this version of “Jon Glaser” is derived from a real and genuine love of all things gear. I met up with Glaser in between takes during the filming of the hilarious second season — premiering on January 9th — to talk shop and get to the bottom of his fascination with cool swag. 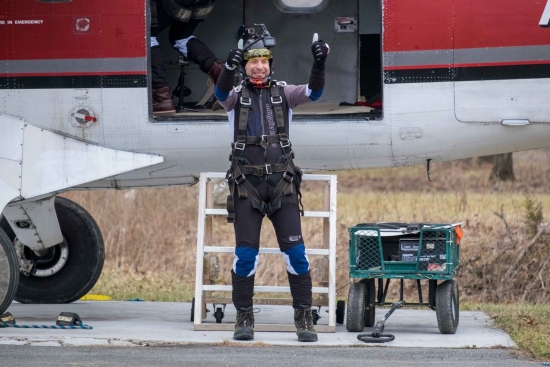 “To me, I didn’t even approach it from a comedy standpoint at all,” Glaser explains in between slurps of an insanely spicy bowl of udon noodle soup. “The original idea for the show was way more reality-based. I didn’t even consider pitching it to comedy networks at all. I thought it would be much more gear-based. It comes from a genuine place of really liking gear and stuff. I thought at the time, it was a very loose idea, that it would be more about going to companies and saying ‘let’s see some new gear! What do you have that’s coming up that’s new that’s not out yet?” Really kind of nerding out on gear and seeing stuff, whatever activity it might be.”

While the show had a more wholesome beginning, of course, it began to veer into Glaser’s usual absurd world. The first season of the series followed Jon as he tested out and new gear for different activities such as camping, building a man cave, surfing and cycling with both his automated gear specialist Gear-i, voiced by John Hodgman, and his co-expert, or “Spurt” for short, Steve Cirbus. As we get deeper and deeper, Glaser’s enthusiasm for the gear on his show begins to affect his family and personal life.

The new season follows this obsession even further as “Jon” begins to lose sight of where the show ends and where it begins. If you have seen the first season, you will know exactly what I am talking about. Glaser credits the inspiration behind this heightened version of himself on a routine that he used to perform onstage when he had found himself only wanting to talk about what new gear had been on his mind at that moment.

“I did this bit onstage years ago, and I’ve done it a bunch, where I wore a jacket onstage,” he remembers. “The first time I did it was with this really nice raincoat that I bought from this company called Westcomb which is an offshoot of Arc’teryx. They make really high-end more technical raincoats for backpacking or ice climbing.”

“It’s way more jacket than you need for just in the city, but it’s just cool gear. It’s got pit-zips, which is something that I love, and waterproof seams. It’s big enough to fit over a helmet if you’re ice climbing or snowboarding. It’s a really nice beautifully made jacket,” he adds. “So, I was wearing it one night when I did a show and I was trying to figure out what to do and I really didn’t have an idea. So, I thought ‘I’m just gonna go onstage and I’m going to talk about this jacket’. So I went onstage and did this dry setup. I had it all the way zipped up. I had the hood on. I had the backtabs pulled tight so it was this weird kind of presentation. I said to the audience ‘I was trying to think of a bit for tonight and was having a tough time thinking about something new. I had writer’s block so I went back to that tried and true device of write about what you love. Something I love is this raincoat.’”

Is this fascination as all-consuming in Jon’s real life or is this something he sees as a midlife crisis? To Glaser, the answer might be a little complicated.

“I never thought of it as a midlife crisis thing,” Glaser laughs, “but it is a funny way to look at it! It’s one of those things where if I step back I’m sure I’d be like ‘Oh my god.’”