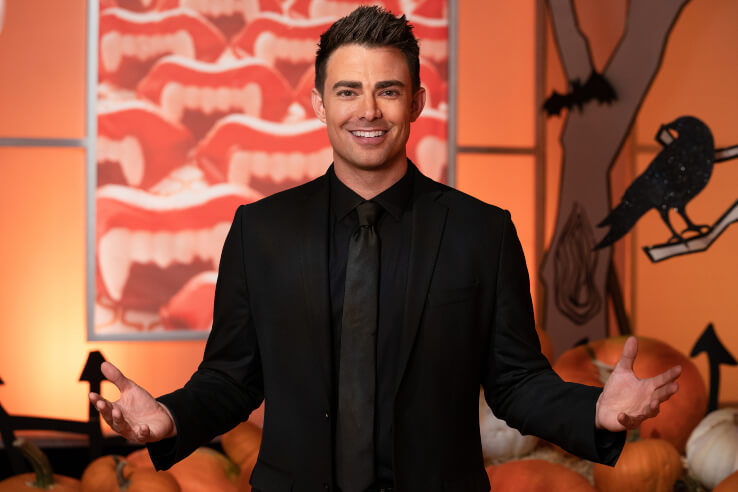 Fifteen years ago Jonathan Bennett was one of the country’s most sought-after heartthrobs after his breakout role in the 2004 smash-hit “Mean Girls.” Now the actor has moved on to another role, hosting, and the 38-year-old could not be more excited about it. Bennett has hosted in the past for Food Network, but his all-time favorite gig is for the fan-favorite “Halloween Wars”. Bennett sat down with Metro to chat about the competition series, dive into what he loves about hosting and give the scoop on what makes the show so sweetly addicting for audiences.

As far as Food Network, I did “Dancing with the Stars” and when I got voted off very early, I realized I can’t dance— and that’s totally fine, dancing is not for me. Then some people from Food Network saw me on there and they agreed I wasn’t a good dancer. But they thought I was really funny and that I would be a really good fit for “Cake Wars.” So they offered me the job on “Cake Wars,” and I jumped at the chance because who doesn’t want to be a host on Food Network? It’s a dream job. The more I worked there, the more in love with food I got, and the more I was around all of the amazing chefs, bakers and cake artists on the show that love just kept growing until I decided I needed to release a cookbook. I had all of these recipes from my late mother who was a chef — she had incredible recipes that I just wanted to share with the world. So I combined my talent and passion for food, hosting on Food Network and being in “Mean Girls” to make “The Burn Cookbook.”

What exactly goes down on “Halloween Wars”?

What I love about “Halloween Wars” is that it’s different from all of the other shows. This one is the number one fan favorite I think of the Network, people wait in anticipation all year long to see it. Once the show hits, it’s an indication that the holidays are upon us and it’s time to start getting ready for fall, winter and Christmas. It’s one of the craziest shows you’ll ever see. We take three artists: A cake artist, a pumpkin carver and a sugar artist, we team them up and we put them against four other teams to see which one can create the most terrifying, mind-blowing, gravity-defying displays out of nothing but cake, pumpkin and sugar. What’s so fun is that not only are the displays terrifying, they’re also delicious. Every week there’s a different theme and we give them challenges specifically for that episode. Every week someone also goes home.

What is it about “Halloween Wars” that makes it so highly-anticipated and addicting for people?

I think what makes “Halloween Wars” the number one fan-favorite show on Food Network is the excitement and the fun that the people have on the show. The talent that our show finds from the contestants and brings to the competition is better than anything else I’ve ever seen on television. We just have so much fun, we don’t take ourselves too seriously—- but yet we take it very seriously. There’s a great mixture of scary, talent and fun, it’s just the right amount of everything.

I love getting to do all the different gags and time calls with all of our amazing guest judges. Not only do we have amazing sugar artists and a lot of fun, but we also have special celebrity judges in every episode. We have people from “Twilight,” “Walking Dead,” “Stranger Things”— cast members from pretty much all over the horror genre coming on to guest judge. That’s a pretty special thing because we don’t pay these people a lot of money, but when we call them, 100% of the time they say yes. They jump at the chance because they’re fans of the show or their kids are fans of the show. So there’s just an excitement about “Halloween Wars” that makes people want to be there and be on the show. You just never know what you’re going to see— not only are you going to see amazing sugar work and crazy pumpkin carving, you’re also going to see some of your favorite celebrities from the horror genre judging those creations. On top of that, my absolute favorite part of the show is what I get to do. I get to do all of these skits with all of our guest judges and do all of this goofy and ridiculous comedy on the show that no other show on Food Network has.

Overall why would you tell people to watch Food Network’s “Halloween Wars”?

I would say you should watch “Halloween Wars” because it gets you in the mood for Halloween, you get to see mindblowing pumpkin creations and you get the hilarious wit of the extremely talented host, Jonathan Bennett. You’ve never seen pumpkins quite like this.