Keep your training in Crews control this summer - Metro US
Celebrities

Keep your training in Crews control this summer Hollywood heavyweight Terry Crews has a formula for staying as shredded today as the star of “Brooklyn Nine-Nine” and Panera Bread pitchman as he looked more than a decade ago when he addressed the nation as President Dwayne Elizondo Mountain Dew Herbert Camacho in the cult classic “Idiocracy.” Training consistency in the weight room – plus a dash of cheat in the kitchen – is how the 49-year-old’s physique looks ripped year-round and what can help you stay ready for the summer.

“I’ve never had that let’s go get big and then come back down, mentality [to training],” the former football player says. “Just look through my 20-year career on Google. I look exactly the same. I want the mix between [Mr. Olympia] Ronnie Coleman and [Olympic sprinter] Usain Bolt. I want my body to be right in that middle.”

With badass roles such as Caesar in “The Expendables,” and Bedlam in “Deadpool 2,” Crews used his 6-foot-3, 245-pound frame to its advantage. “Now when they write scripts, they say, ‘We want a Terry Crews type,’” he laughs. His workouts and diet plan have helped as well. Crews runs 4 miles each day and hits the gym five days a week with a bodybuilding-type training routine.

Nutritionally, Crews adheres more to a “when to eat” philosophy of dieting as opposed to what to eats. An intermittent-fasting advocate, Crews eats from 2 to 10 p.m. each night, spreading out the protein and healthy fats during the day, carbs at night — with some healthy cheating scattered in between. Whether it’s his breakfast-for-dinner cuisine —  “Stacks of pancakes smothered in maple syrup, butter, with bacon and eggs is a dream meal,” he says – or Panera’s latest bacon mac and cheese offering (available through June 26), as he handed out during last week’s Firefly Festival in Delaware while promoting the the chain’s delivery service launch, he says cheating is a part of living, nutritionally speaking. And it could be a good thing.

“It’s almost like the way we’re wired,” Crews explains. “If you said, ‘Stay off the grass,’ all I can think about is the grass. I never was thinking about grass until you said it. It’s the same thing with food. My thing is, you have to indulge because once you start feeling like you’re missing something, then you’ve got a problem.”

We’re not all like Terry Crews with the willpower and dedication for a consistently fit physique and proper training regimen12 months a year. But now with summer here and all its landmines — extended Fourth of July weekend, summer Fridays, barbecues, margaritas on the beach — here to endanger our waistlines, we can use these four tried-and-true training tips from Crews to keep us in shape throughout the summer. 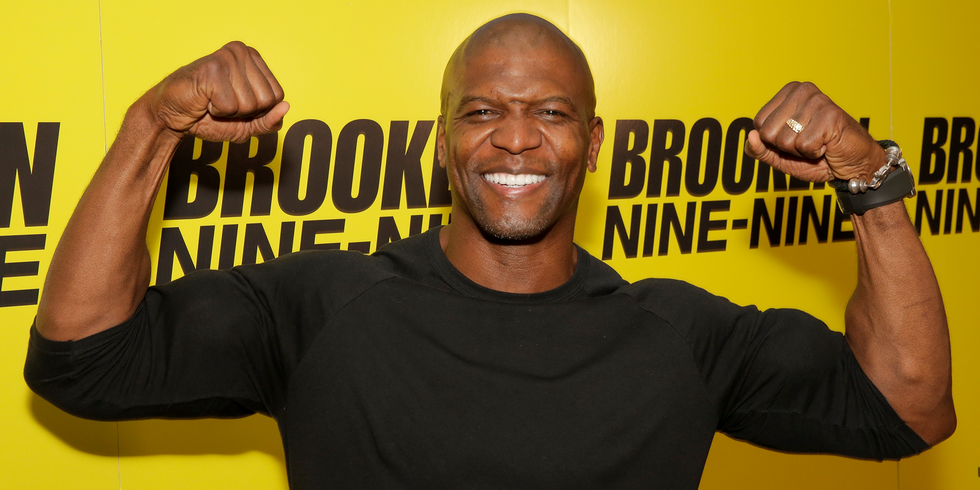 1. Try meal prepping: “If you don’t a plan, that’s when you can always go off the deep end,” Crews says. Crews suggests having a food plan of attack for the week, having your meals ready for those times when you’re too occupied with the sun to worry about cooking. “Make one day a meal-prep day,” Crews says. “Have your food prepared beforehand so you can get all the way through that day you’re wanna chill – and that’s all good. But from there, it’s back to being strict – and your meals are will be all ready.”

2. Get your workout in early. Odds are a day in the sun is going to zap your energy –  and perhaps motivation — for an afternoon training session. While most of us are still in bed at 5 a.m., Terry Crews is hitting the gym hard. “For me it’s morning, morning, morning,” Crews says. “It’s the hardest thing you do all day, and you’ve got it done. Then you’re fine the rest of the day.”

3. Get out and run. There’s gonna be that day when you hit it too hard. It’s inevitable. When it happens, run out the previous day’s overindulgence. “I always encourage people to run,” says Crews. “I mean, get out and just run it off because a lot of times you feel that kind of congestion in you. Go get in a good, good run or a good cardio session and get that congestion out of you.”

4. HIIT it hard. High-intensity interval training is quick, intense, and will burn calories. It’s the perfect short workout for those on the go during the summer. “Turn your workout up to a real high volume, get your heart rate up, then slow it down. That’ll settle your body out,” Crews says. For good measure, you can try one of Crews’ workouts — what he calls “24s.” This workout consists of an upright row, power clean, Romanian deadlift, and jump squats of 6 reps each (total of 24), for anywhere from 2 to 4 sets. “You’ll be good after that,” Crews promises. “Then go get a Panera bacon mac & cheese and do it all over again.”