When Kevin Hart was first approached about The Upside, he saw it as a chance to explore another side to his talents.

While his character Dell still has a sense of humor and mischievous spark as the unlikely caregiver to the billionaire quadriplegic Phillip, played by Bryan Cranston, the comedian and actor also had to explore more dramatic and emotional territory than he is accustomed to.

“It is a switch,” Kevin Hart admits to Metro. “A nice little change of gears to sneakily take my fanbase in the direction that they didn’t know that I was capable of going in.”

“It is not to say this is who I am or that this is what I am going to do all the time. This is a glimpse of what you are going to see more of as time goes on. I am just baby stepping people into it.”

Surprisingly, The Upside director Neil Burger originally wasn’t convinced that Hart was right for the film.

“When they first mentioned Kevin Hart I was a little bit like, ‘Oh, really?’” says Burger. “I went and looked back at his comedy and what I realized was that he is a storyteller. Which I knew was integral to tell a drama.”

But while Hart was stepping out of his comfort zone for the remake of the critically acclaimed 2011 French comedy/drama The Intouchables, the fact The Upside was shot in his home town of Philadelphia meant he couldn’t have been in safer surroundings. Crowds even gathered to watch Hart shoot scenes in Kensingston.

“This is the first time I have actually shot in Philadelphia. It was amazing to go home,” says Hart. “Shooting some days was tough. We had people lined up on the streets.”

Ultimately, though, Hart believes that The Upside has added yet another string to his increasingly expanding bow.

“The good thing about this is that, at this point in my career, stumbling upon this road and saying, ‘Wow. I can go down this road. And I can do a lot of cool things.’ It is something that is exciting.” 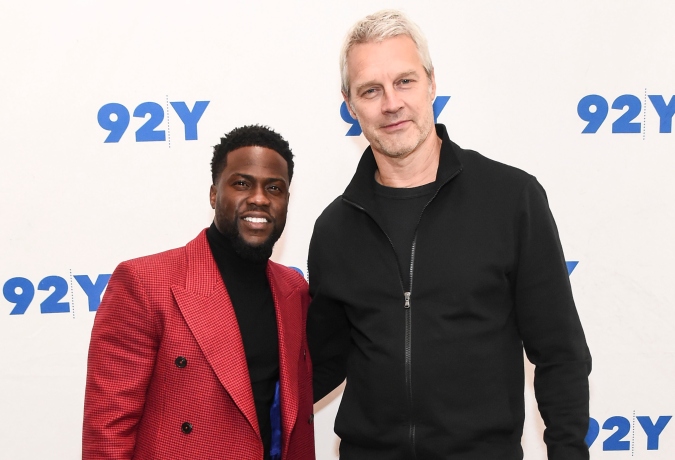 “It adds a boost to the career. I have another door that I can go through and it has opened up and it makes me think I can attack a film like this at the highest level possible. I am constantly thinking, ‘How can I gain success here? How can I make the resume more impressive.’”

This includes directing, too. But while Hart admits he has considered moving behind the camera, he is no rush to do so.

“I have already done an episode of my TV show, Real Husbands a long time ago. That was very easy for me. I understood it. Totally grasped it. But when the time is right I will step behind the camera. I am very patient with everything. I’ve got lots of time.”

The Upside hits theaters on January 11.