While the crosstown-rival Yankees countdown to their magic number of playoff contention, the New York Mets are simply waiting to be put out of their misery.

A heinously disappointing campaign has but two weeks remaining as the Mets are left to wonder what might have been if health and possibly a little bit of luck were to play on its side for once.

But once again, future promises are the team’s consolation prize as Terry Collins and Co. start looking for pieces to use for the playoff puzzle in 2018.

One of the team’s most notable needs is at catcher as starter Travis d’Arnaud has left much to be desired at the position, both offensively and defensively.

Staying relatively healthy for the first time since 2014, the 28-year-old’s arm has been suspect behind the plate. Of 60 attempted base stealers, d’Arnaud has thrown out just 11 of them, which is a dismal 18 percent.

His bat hasn’t been much stronger.

While there is a premium for offensive catchers around the league, it’s understandable why some would call for the Mets to survey their options at the position.

General manager Sandy Alderson has already hinted that he is content with his current catching situation and that it probably will go unchanged in 2018.  But it might not be d’Arnaud that will start the bulk of the games behind the plate.

If you look at backup catcher Kevin Plawecki’s 2017 numbers, they are nothing more than pedestrian, if not worse.

Spending most of the season in the minor leagues until the Mets dealt Rene Rivera — then the backup to d’Arnaud at the time — to the Cubs, Plawecki had to contend with a two-month hiatus from the majors from May to August. Though he played just 10 games in the first two months of the season, it wasn’t pretty.

He recorded just three hits in 24 at-bats, which came out to a .125 average before being sent down.

Since his return from triple-A on Aug. 19, he’s been a completely different player. In 17 games, he’s batting .283 with a .367 on-base percentage, two home runs and five RBI.

“I was pressing a little too much, to be honest, and maybe swinging at some pitches that I normally am not comfortable swinging at, just to try to make some things happen,” Plawecki told the New York Post. “And what has been different this time is just trusting what I have been doing all season down there [in the minors] and not having that thought in the back of my head, ‘How long am I going to be here and how big of a window do I have to prove myself?’”

With the way he’s playing now, that window is only growing as Metro Stats Session takes a look at what Plawecki’s numbers would look like if he played a full season at his current 17-game pace: 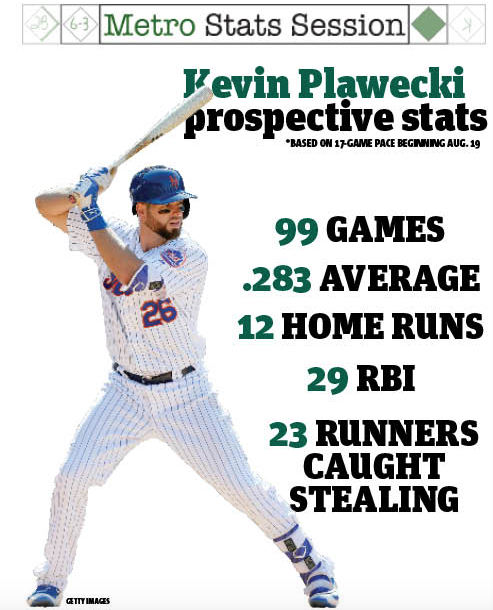