Have you ever swiped your MTA card, received the “insufficient fare” warning, then remembered you still haven’t Venmoed your friend for dinner last night and thought to yourself: I wonder if my sorry income will ever compare to the Kim Kardashian net worth? (Or am I alone on this?)

Forbes announced Wednesday that the Kim Kardashian net worth comes out to just over one-third of Kylie Jenner’s.

Jenner, whose net worth is an estimated $900 million, is slated to become the world’s youngest self-made billionaire by the time she’s 21.

Kylie Cosmetics is worth about $800 million (this alone is over twice as much as the Kim Kardashian net worth), and Jenner strategically uses her social media accounts to push ads.

“I don’t pay for advertisements,” Jenner told Fast Company last year. “I don’t do commercials. Social media is the only way I push it: Snapchat, Instagram.”

Both women utilize social media to promote their highly successful makeup lines. And though Jenner is worth more — Forbes calculated the Kim Kardashian net worth as $350 million — marketing experts have analyzed Kardashian’s social media strategy for years (long before Jenner even became a teenager).

According to STAT news, Kardashian made more off one Instagram post than Trump makes in a single year.

The site obtained a contract from July 2015 between Kardashian’s company, Kimsaprincess, and the maker of morning sickness pill Diclegis, Duchesnay USA, that said she was paid half a million dollars for the post.

#Ad #DYK 4 million babies are born each year in the US. That means a lot of my US followers are mommies2B who could have morning sickness like I did! I want to share what helped me: Diclegis® (doxylamine succinate/pyridoxine HCl), the only FDA-approved medication for morning sickness when diet & lifestyle changes fail. My doctor assured me that it’s safe & effective for mom & baby. It’s also easy to recognize – it has the cutest pregnant lady on it! #DontSufferinSilence you’re not alone! If you have morning sickness, ask your healthcare provider if #Diclegis is right for you. The most common side effect of Diclegis is drowsiness. Diclegis.com US Residents Only Diclegis is a prescription medicine used to treat nausea & vomiting of pregnancy in women who haven’t improved with change in diet or other non-medicine treatments. Limitation of Use: Diclegis hasn’t been studied in women with hyperemesis gravidarum. Important Safety Information Don’t take Diclegis if you’re allergic to any of the ingredients in Diclegis. You should also not take Diclegis in combination with medicines called monoamine oxidase inhibitors, as these medicines can intensify & prolong the adverse CNS effects of Diclegis. Don’t drive, operate heavy machinery or other activities that need your full attention unless your healthcare provider says that you may do so. Don’t drink alcohol or take other central nervous system depressants such as cough & cold medicines, certain pain medicines & medicines that help you sleep while you take Diclegis. Severe drowsiness can happen or become worse causing falls or accidents. It is not known if Diclegis is safe & effective in children under 18 years of age. Keep Diclegis & all medicines out of the reach of children. Tell your healthcare provider about all of your medical conditions, including if you’re breastfeeding or plan to breastfeed. Diclegis can pass into your breast milk & may harm your baby. You shouldn’t breastfeed while using Diclegis. Additional safety information can be found at DiclegisImportantSafetyinfo.com. Duchesnay USA encourages you to report negative side effects of prescription drugs to the FDA. Visit fda.gov/medwatch or

The FDA actually sent Duchesnay USA a letter ordering them to discontinue working with the celeb because she’d reportedly left out “all risk information” from the Instagram. 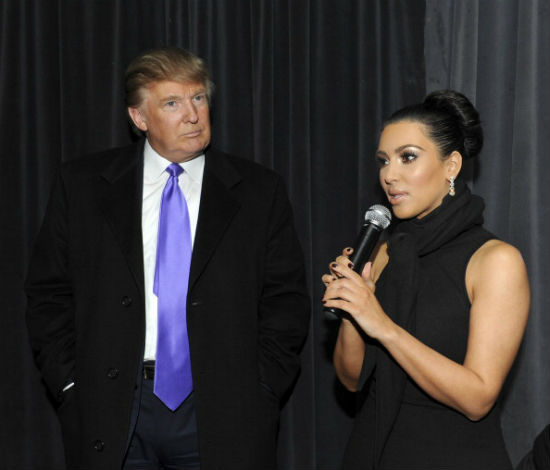 But, if we’re talking about the president’s net worth, his trumps hers. The $350 million Kim Kardashian net worth is nothing (“nothing”) compared to Trump’s estimated $2.8 billion as of this year.

It’s safe to say, though, that when it comes to social media strategy (and aesthetic) Kim’s got Donald beat.