Kumail Nanjiani on how the Internet turned everyone crazy For the record, Kumail Nanjiani and Emily V. Gordon have great relationships with their parents. The couple wrote the dramatic comedy “The Big Sick,” which is based on their lives — specifically on their courtship a decade ago, when a nasty case of the flu plunger her into a month-long coma. But their onscreen parents aren’t quite the same as the real deal. The movie version of Emily (played by Zoe Kazan) has parents (Holly Hunter and Ray Romano) who are easily flustered, often bickering. Meanwhile, film-Kumail (played by Nanjiani himself) is afraid to tell his traditional Pakistani family (Anupam Kher and Zenobia Shroff) he’s dating a white American.

“My parents pretty much said, ‘Oh, it’s only a movie. It’s not like us at all,’” says Gordon, who married Nanjiani shortly after their ordeal, in 2007.

Nanjiani’s mother and father had a different response.

The result is a Sundance hit that, on top of mining comedy out of a trying time, shows a very different side of Nanjiani than viewers have seen over four seasons of “Silicon Valley.” On the hit show, he plays awkward-yet-scheming programmer Dinesh, who didn’t even get laid onscreen till this year. In “The Big Sick,” he’s a pure rom-com lead, if in a film where the lovers are kept apart by illness.

It also winds up saying as much about parental relationships as it does about love. Though the problems are very different, it’s easy for people who have trouble speaking to Trump relatives to get a lot out of movie-Kumail’s issues with his mom and dad.

“Sometimes there are certain things you have to take out of your relationship with your parents. I think that’s healthy,” Nanjiani tells us. “With your parents, there are certain things you disagree on, and every time you go to them it’s going to be a s—show. It’s OK to be like, ‘We have a relationship, we love each other, but there’s this one thing we’re just not going to talk about.’”

“I have an uncle I just talk about animals with. That’s what we have,” Gordon says. “It’s good to remember that these people were your relatives before any of this stuff came up. They’re going to be your parents afterwards. It’s always good to see their perspective as much as you can. Writing this movie, we both got a lot of empathy for our parents’ viewpoints. Empathy is always helpful.” 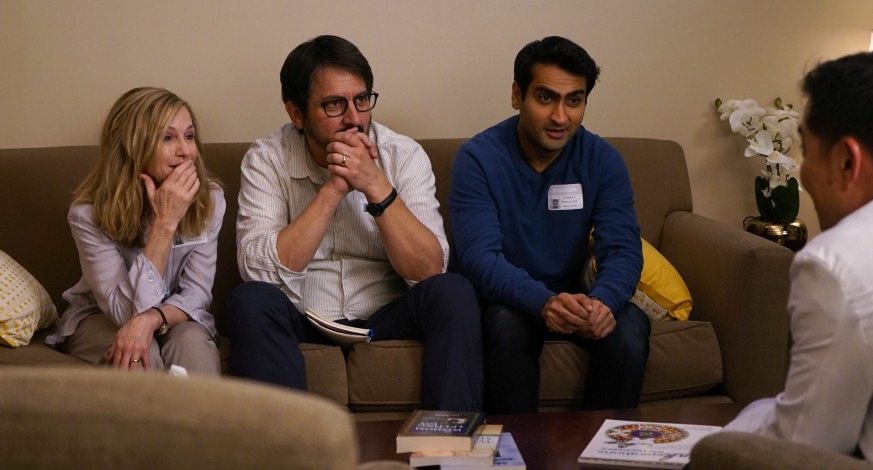 The movie’s timing is perfect in other ways. “The Big Sick” finds Kumail forced to spend weeks in the hospital with Emily’s parents, whom he’s never met. They’re from the Midwest, and though they’re cool with their daughter’s inter-ethnic relationship, it can be a bit awkward at times bridging the cultural gap. It’s a utopian vision that arrives amidst dispiriting debates over immigration.

“Judd [Apatow, who produced] was like, ‘It’s so good we wrote this story before [this all happened],’” Nanjiani says with a laugh. “If not there would have been pressure to say something. It’s just a movie, and whatever people take from it, they take from it.”

In real life, Nanjiani is a prolific Twitterer, sometimes going after politicians who cross the line. Being on social media also means he sometimes attracts the worst of humanity, who pelt him with bigoted comments.

“On Twitter, I hear that stuff all the time,” Nanjiani explains. “It’s so strange: We’re at this point where people feel OK saying, ‘I’m not for race-mixing.’ People feel that’s a valid opinion to have, and you can just say it. The Internet empowers people to say it in real life, too. There’s people in the House of Representatives that say that s—. How is it OK that this person feels OK saying this and they aren’t run out of town?”

And it may never go back to what was once normal. “The Internet is such a powerful thing,” he says. “We had no idea what we were making, and we clearly do not have the power to control it. It’s become its own serpent that’s insinuating itself into all our lives.”

Gordon tries to stay hopeful: “The people we do know and care about are lovely. That’s what a community is.”