Because the biggest twist in modern history is the return of Nazis, the Museum of Jewish Heritage will host the world’s largest exhibit ever on the most notorious concentration camp, Auschwitz.

Bringing together more than 700 artifacts and 400 photographs across 20 galleries, Auschwitz: Not Long Ago. Not Far Away charts the rise of Nazi ideology and reveals how an ordinary Polish town, Oświęcim, was transformed into the deadliest concentration camp, where over 1.1 million prisoners were killed.

The exhibition will open on May 8, the anniversary of VE Day (Victory in Europe Day) when Germany’s surrender to the Allies ended world War II in 1945, through Jan. 3, 2020. Timed tickets are available now.

“While we had all hoped after the Holocaust that the international community would come together to stop genocide, mass murder and ethnic cleansing, these crimes continue,” says Bruce C. Ratner, chairman of the museum’s Board of Trustees. “[M]y hope for this exhibit is that it motivates all of us to make the connections between the world of the past and the world of the present, and to take a firm stand against hate, bigotry, ethnic violence, religious intolerance and nationalist brutality of all kinds.” 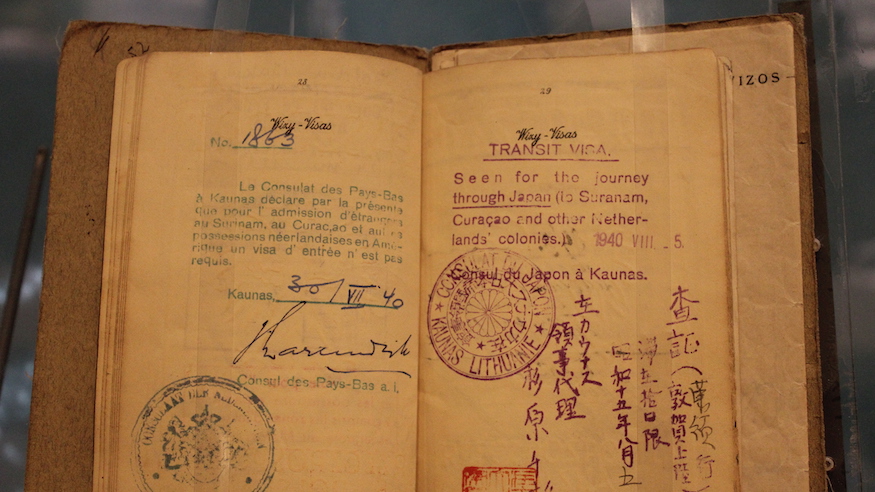 The passport of Jakob Goldin, one of the thousands saved by the man known as the Japanese Oskar Schindler, Chiune Sugihara. Credit: Gift of Isabella Goldin Weinberg, Museum of Jewish Heritage

Inside the Auschwitz exhibit at the Museum of Jewish Heritage

The exhibition was assembled from dozens of institutions and private collections from around the world including the Anne Frank House in Amsterdam, Israel’s memorial to Holocaust victims Yad Vashem, and the Mauthausen Memorial, a former concentration camp in Austria.

The Museum of Jewish Heritage — A Living Memorial to the Holocaust contributed more than 100 items from its own collection, artifacts from survivors and Allied forces who settled in New York after the war including Alfred Kantor and Louis Bannet, the trumpeter known as the “Dutch Louis Armstrong.”

Items on display will include personal effects of prisoners as well as the SS guards and officers who ran the camp; an original freight wagon used by Germany to deport of Jews to ghettos and extermination camps; a barrack from Auschwitz III-Monowitz, a slave labor camp where author Elie Wiesel was imprisoned.

Art is also a major component of Auschwitz: Not Long Ago, Not Far Away with works by masters including Pablo Picasso — but the biggest display will be reserved for David Olère, whose works depicted parts of camp life not recorded in any other way. The painter and sculptor was born in Poland and survived for three years in Auschwitz, then spent the rest of his life chronicling its horrors through art because “He did not have the words to describe it, even though he spoke five languages,” according to his wife.

The exhibit first opened in Madrid in 2017 and will continue touring after its New York run.

“Documented facts of this history, original records and photographs, and witnesses’ accounts are our strongest answers to those who deny or minimize the Holocaust,” says Michael S. Glickman, president and CEO of the Museum of Jewish Heritage – A Living Memorial to the Holocaust. “Learning the history of the Holocaust as a history of individuals is an act of resistance.” 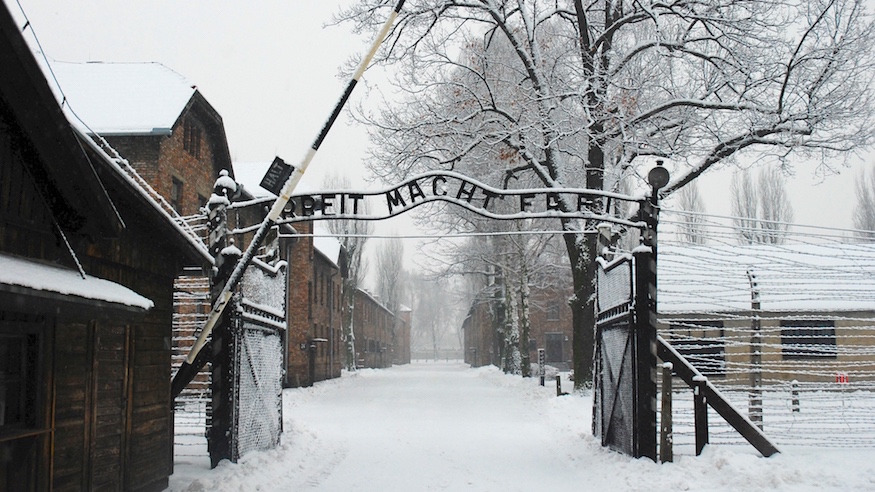 A brief history of Auschwitz

Even among the horrors of concentration camps, Auschwitz was notorious. Opened in 1940, it was the largest of the Nazis’ camps and deadliest. Of the estimated 18 million people killed during the Holocaust, over 1.1 million died at Auschwitz.

Initially, the camp served as a prison for politican dissidents. As it grew and became primarily a ghetto for Jewish people, the Nazis began exterminations using gas chambers. Those who weren’t killed were forced to work as slave labor. Others were subjected to the horrific medical experiments of Josef Mengele.

Jewish people made up about 1 million of those murdered, but they were not the only ones brought to Auschwitz. Others deemed unfit to propagate the “Aryan master race” were also imprisoned, including Polish political prisoners, Sinti and Roma “gypsies,” Soviet POWs, Jehovah’s Witnesses, the disabled and anyone the Nazis found to be gay, “criminal” or otherwise “inferior.” Many died in gas chambers, and their bodies burned in crematoriums.

“Anti-Semitic, hateful, xenophobic ideologies that in the past led to the human catastrophe of Auschwitz seem not to be erased from our lives today. They still poison people’s minds and influence our contemporary attitudes,” says Piotr M. A. Cywiński, director of the Auschwitz-Birkenau State Museum that helped organize the exhibition. “That is why studying the Holocaust shouldn’t be limited to history classes.”