Last year, Stephen King fans were treated to a reimagining of his famed eerie town with Hulu’s “Castle Rock.” While that season deepened the mystery of that quiet Maine town with a trip back to Shawshank prison, Season 2 of the show follows a different beloved narrative with a prequel to “Misery,” with Lizzy Caplan taking on the iconic role of Annie Wilkes, which earned Kathy Bates an Oscar for her portrayal in the 1990 classic film.

In this new story, we catch up with Wilkes as she is driving around the country with her daughter Joy (played by Elsie Fisher of “Eighth Grade”) as she changes identities in order to find work as a  nurse to steal prescription medication in order to combat her mental illness. The two find themselves stranded in the town of Castle Rock when they run into car trouble and Annie is forced to find work at the local hospital in order to raise money to leave, as well as get the pills she needs. As we follow her, the reasons why she and her daughter are on the run become more clear as we get a peek inside one of King’s most complex characters.

For Caplan, getting to play one of her favorite characters in both film and literature was a surreal thrill.

“One of the most interesting things about Stephen King,” says Caplan,  “is that, obviously he’s an author, but because his books have spawned so many classic films, there’s this mix of the books together and the films in everybody’s minds. ‘Misery’ being a prime example. That book and that film are so intertwined that it’s hard to separate Annie from what Kathy Bates did. So much so that, I was recently on a road trip and I was listening to an audio tape of ‘Misery’ and the woman reading the audio book was flipping into Kathy Bates-type vocal inflections!”

All of this history surrounding the character of Annie Wilkes just made Caplan want to take extra strides to do her story justice.

“I just knew that this character was very unlike anything I had played before and I wanted it to feel very different. For me, on set, I didn’t want  to recognize any part of myself in who this character was. As a fan of the book and a huge fan of the film, that was the Annie Wilkes that is seared into my brain. I think it would be off-putting for me as a viewer to try to create something that couldn’t feasibly be a prequel to the story we all know and love.”

Both Wilkes and her daughter get taken in by “Ace” Merrill (Paul Sparks), the heir to the Merrill crime family that runs the town of Castle Rock. Merill’s dying father, Pop, is played by an actor who was involved with one of King’s most iconic film adaptations, Tim Robbins. I asked Robbins how it felt to be invited back to explore Castle Rock nearly 25 years since the release of “The Shawshank Redemption.”

“It’s such a different universe than the other Stephen King thing I’ve done,” says Robbins. “But that’s a testament to him as a writer. He’s so multifaceted as a writer.”

That of course, is absolutely what makes this show such a pleasure for longtime fans. Although King may be regarded as a master of suspense, he sometimes does not get the recognition he deserves for the vast emotional territory he has been able to inhabit as a writer. This is something that Robbins has always respected and been drawn to as a fan.

“He’s always had an understanding of not only the darkness of humanity but to be able to write those novels that scare the hell out of you and then write the different novellas. It’s that thing where historians are always like, ‘How is it possible that Shakespeare wrote ‘A Midsummer Night’s Dream’ and ‘Hamlet?’ They’re two wildly different plays! One’s a comedy and one is one of the greatest tragedies of all-time.’ Look at Stephen King. He does it all the time,” says Robbins. 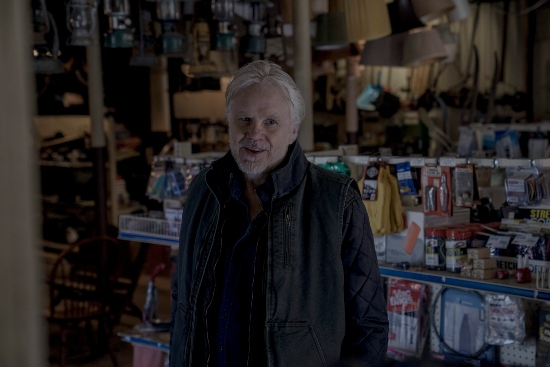 There are many different callbacks and references to classic works in the author’s oeuvre, though one in particular will be a welcome surprise for fans of his seasonal horror classics. To reveal it here would, of course,  be an unredeemable spoiler. But knowing that fans of “Misery” will be able to follow the story of Annie Wilkes one more time is satisfying enough for now. By using her as the focal point and the anti-hero of this story, we get to see her piece together the evils of the town, even as those around her question her judgement.

Watch the trailer for Castle Rock season 2 below…