For over 30 years, musician and songwriter Lou Barlow has been one of the most hard-working and influential musicians in all of indie rock. Barlow first came on the scene playing bass and acting as the secondary frontman in Dinosaur Jr. behind the distinctive slow drawl and guitar wizardry of the band’s leader, J. Mascis. In the late ’80s, however, Barlow formed the band Sebadoh, which let him spread his wings as a songwriter more freely. The band recently released their 13th album, “Act Surprised,” this past May, which finds them as energized and vital as ever.

“I knew this band had some great instrumental strengths and I really hoped that we could capture the energy in a crackling environment,” — Lou Barlow on the new Sebadoh album, “Act Surprised”. 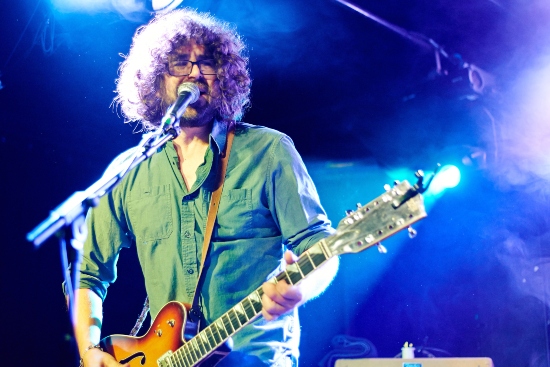 While Barlow writes the occasional song or two on each Dinosaur Jr. record that he appears on, Sebadoh acts more as an equal songwriting partnership between Barlow and bassist Jason Loewenstein. For this record, both Barlow and Loewenstein brought songs to the table that reflected both of their views on the current state of the world, as well as songs that provided perspective on difficult times in their lives that they were not able to voice clearly on their 2013 album, “Defend Yourself.” In fact, in the time since recording that last album, both Barlow and Loewenstein went through painful divorces with their wives, and have since remarried.

“I found it was a very dark record,” says Barlow, looking back on that album. “I had just left my first wife. It had just occurred when we were making that record. It lacked perspective because it was happening as the situation was unfolding. But I think where we are right now, we’re both remarried. It’s a pretty monumental shift with us. Both of us are lyrically looking outward.”

The lyrical content on the album mirrors that completely. The emotional components approach the subjects with wisdom, while the social commentary comes off as informed frustration as opposed to anger for anger’s sake. Songs like “See-Saw” find Barlow pleading for a society that has been desensitized to others’ suffering to put down their phones for enough time to care. “Blame your victim, it’s a lazy day,” the song goes. “To act on impulse and call it brave.”

“To me, that’s a song about people losing compassion,” says Barlow by phone. “It is about communication and this strange period that we’re in where people are adjusting to the effects of social media on their lives. It’s a very mixed-up time.”

These intense emotions carry over to the music, as “Act Surprised” is the most energized and on-fire the band has sounded in years. But with Barlow’s busy schedule with Dinosaur Jr., he wasn’t sure if there would even be another Sebadoh record, let alone one as fantastic as this one.

“I was not optimistic, that’s all I can say!” Barlow says with a laugh. “There were some intervening years where I didn’t know if we could reconvene. Luckily we did. We’re over the 10-year mark now just as playing together. It takes a long time for a band — at least in my experience, it takes a while before you really intuitively play with each other. I knew this band had some great instrumental strengths and I really hoped that we could capture the energy in a crackling environment. Just someplace where we could capture the energy of the three-piece. The right analogy would be some kind of plant or a tree, I don’t know [laughs]. I think of it in terms of a macadamia bush, for instance. The valued macadamia nut is delicious, buttery and nutritious. But the factoid is that I think it takes 17 years before they produce the nut. You plant them and you have to have patience and wait until it bears this amazing thing. I guess with us, I knew that in the beginning.”

With all of the constant hard work Barlow has put in over the years, he has barely had the time to poke his head above water to notice the profound effect his waves have created after he jumped into playing music. To keep up this water metaphor, he cited a piece of wisdom he once heard from one of alternative music’s forefathers: Mike Watt of the Minutemen.

“Mike Watt has a really cool way of describing this as it’s just this river,” says Barlow. “It’s this flowing river of music and inspiration and being a part of that is what you’re really after. You’re after just being a part of the flow. Then it becomes less about people imitating you and it becomes more about inspiring people in some way. I think with Sebadoh, our inspiration has largely been philosophical. I don’t hear bands that sound like Sebadoh in the same way that they sound like Pavement. We haven’t had a particular sound. Just to be a part of it is a huge thing and that’s kind of it.”

Make sure to catch Sebadoh on tour this summer.

Stream “Act Surprised” by Sebadoh below…