Macy's Thanksgiving Day Parade 2018: All the ways to watch - Metro US
Television

Macy’s Thanksgiving Day Parade 2018: All the ways to watch Everyone has early morning Thanksgiving traditions. My family, for instance, does the annual Turkey Trot 5K near my hometown (in turkey tutus no less). Aside from getting started on some cooking, maybe yours gathers around the TV to watch Macy’s Thanksgiving Day Parade. (And, if you’re wondering, I catch the end of it every year after the 5K.)

Balloons such as the ever-cheerful Charlie Brown, Toothless the dragon, SpongeBob Squarepants, Olaf the snowman and Pikachu will make their grand return, according to TV Guide.

Macy’s is debuting a new balloon this year, Sunny the Snowpal. She’s a space “snowgirl who helps her friends and makes sure Santa’s sleigh travels safely on Christmas Eve.” (Because even Santa needs a hand navigating.)

Get ready to watch Macy’s Thanksgiving Day Parade this year. It’s going to be spectacular as always.

I mean, look how happy Sunny the Snowpal is: 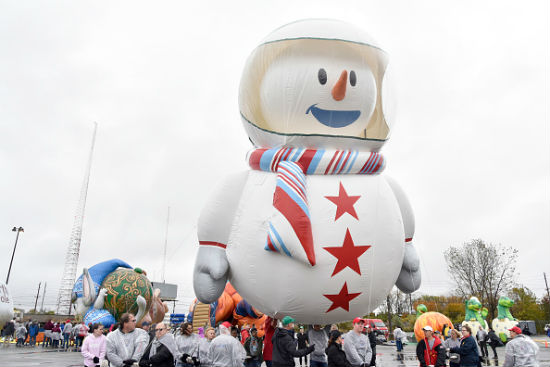 On November 22, the Macy’s Thanksgiving Day Parade will start at 9:00 a.m. ET and end around noon.

Check out Metro’s guide on NYC street closures, transportation and more for the event.

NBC will air the parade starting at 9:00 a.m. ET. Today Show’s Savannah Guthrie, Hoda Kotb and Al Roker are hosting this three-hour segment. A rerun of parade coverage will air at 2:00 p.m. ET.

You can watch a live stream of the parade on Verizon’s YouTube channel, or view it online with your local TV provider at nbc.com/live and through the NBC app.

Thanksgiving is for family. But, if sitting in front of the TV is your idea of bonding (or, to kill time while you wait for the big meal) there are notable marathons scheduled.

Once you watch Macy’s Thanksgiving Day Parade, you could stay tuned to NBC for The National Dog Show. Or, there’s a Friends marathon on TBS from 1:00 p.m. to 6:00 p.m. ET.

There’s also Comedy Central’s marathon of The Office from 2:00 p.m. to 8:00 p.m. ET. Of course, football will be on after dinner as well.

Whether you go to battle about the midterms (if you dare), play a heated game of Monopoly or watch some TV after your Thanksgiving feast, it’ll be a very happy Turkey Day indeed.