Marvel’s Runaways on Hulu: What to expect, release date, trailer and more - Metro US
Television

Marvel’s Runaways on Hulu: What to expect, release date, trailer and more Comic book fans are in an epic age. Characters from the pages of their favorite comics are springing to life on the big and little screen, and the latest to do so is Marvel’s Runaways courtesy of Hulu.

In case you haven’t heard about the new series — or don’t know that it’s based on a comic book series from Marvel — you should know that it’s about six kids who, though they’re not the biggest fans of one another, find themselves on the same side of an epic fight. Who are they fighting exactly? The same people all of us did at the same age: parents. Their own in this case, obviously.

In their blog entry announcing the series, Marvel asked people to wonder “Every teenager thinks their parents are evil. What if you found out they actually were?” That’s what these six characters will be dealing with throughout the show, and it just might make your inner kid cheer.

What can I expect from Marvel’s Runaways?

The streaming service teamed up with Marvel Television to produce this Hulu Original, so fans of the comic book on which the series is based shouldn’t be disappointed. First reviews are positive for the TV take on the cult classic comics, and the series seems to be handling a big hurdle surprisingly well: With a cast of 16 characters, that’s a lot of backstory and explaining to do from the get-go, and clearly.

The team bringing the comic series to life is that of The O.C. and Gossip Girl, so it’s only fitting that one review characterized the show as “The O.C. with superpowers.” Big things are expected with Josh Schwartz & Stephanie Savage writing and showrunning the series. “We’ve known the Runaways’ story would make great television,” the Executive Producer and Head of Marvel Television Jeph Loeb said of bringing the comic to the small screen. “Being lucky enough to have Josh and Stephanie–who have time and again created shows that speak so genuinely to this exact audience–write and produce the series is nothing short of remarkable.” 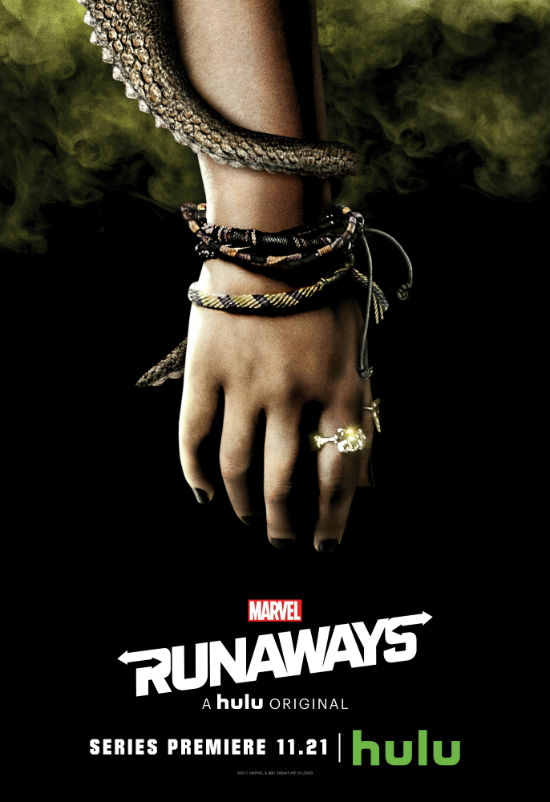 The duo isn’t shying away from the more dangerous parts from the comic books, either. Fans of the favorite series have nothing to fear according to ComicBook.com, who assure nervous viewers that the dinosaurs, aliens and even ritualistic human sacrifice you knew from the page will be present in the Hulu series.

The cast includes Allegra Acosta (of 100 Things to do Before High School, Just Add Magic) as Molly Hernandez, Ariela Barer (of New Girl, One Day at a Time) as Gert Yorkes, Rhenzy Feliz (of Teen Wolf, Casual) as Alex Wilder, Virginia Gardner (of Goat, Little Bitches) as Karolina Dean, Lyrica Okano (of The Affair, Unforgettable) as Nico Minoru–tough and Gregg Sulkin (of Faking It, Don’t Hang Up, Anti Social) as Chase Stein.

Watch the trailer for Marvel’s Runaways

You still have a couple days to wait for the newest Hulu Original to drop, but there’s plenty in this preview for Marvel’s Runaways to get you eagerly counting down the days.

When can I watch Marvel’s Runaways?

The Marvel’s Runaways release date is right around the corner. The new series drops on Hulu on Tuesday, November 21 at midnight, 12:00 a.m. EST. You’ll be able to watch the first three episodes of the the show on Tuesday, but you’ll have to wait for the other seven episodes in the ten-part season.