Cannabis connoisseurs are doing more with marijuana than ever, creating all sorts of edibles, tinctures and topicals. Now, a Massachusetts dispensary has developed a THC-infused lip balm.

Ermont Inc., a medical marijuana dispensary in Quincy and the mastermind behind the marijuana-infused frozen pizza, recently unveiled its latest creation: a medicated lip balm made with coconut oil, beeswax, shea butter, eucalyptus and lemon oil and 5 milligrams of THC.

“Rather than smoking something or eating an edible, the aspect of using a topical is something we’ve been pushing the boundaries on,” said Seth Yaffe, director of operations at Ermont.

“We came up with the idea [because] it’s cold, a lot of people are going skiing or snowboarding, and there’s a lot of chapped lips,” he said. “And we wanted to do an extremely low-dosage topical so that people can use it throughout the day.”

Tetrahydrocannabinol, or THC, is just one chemical (or cannabinoid) within the cannabis plant. THC is the highest psychoactive found in cannabis, Yaffe said, but the low dose in this lip balm wouldn’t bring on any psychoactive effects.

Instead, it will help with anxiety, pain relief, inflammation, healing wounds and dryness, he said. 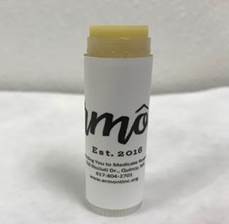 The THC-infused lip balm is $5 at Ermont in Quincy and has been on sale since March 1. Photo: Provided by Ermont

“People can carry it around and not worry about overmedicating or being zoned out of it they usually feel that way from THC,” he added. Plus, for those want to be a bit more discreet in their medical marijuana usage, lip balm is an easy answer.

Future versions of this product will also include cannabis terpenes — basically the essential oils of the cannabis plant that give a specific strain its smell, taste and particular effects.

By adding those in, Ermont can make “strain-specific lip balms,” Yaffe said.

Yaffe believes Ermont is the first dispensary in Massachusetts to develop THC lip balm, and even he’s a bit surprised by the advancement. To him, it shows a burgeoning industry that is constantly making advancements, which are really changing things for those who use marijuana as medicine.

“For us, the most important thing is the relationship we have with our patients. Sometimes we see 200 to 400 patients a day,” he said. “We try to elicit a lot of feedback and get a better idea of what people are looking for, how to consume cannabis throughout the course of their life that makes it easier and less clinical.”

“Instead of popping a pill or drinking an elixir or something like that,” he added, “we’re able to really figure out different ways our body can consume natural medicine.”