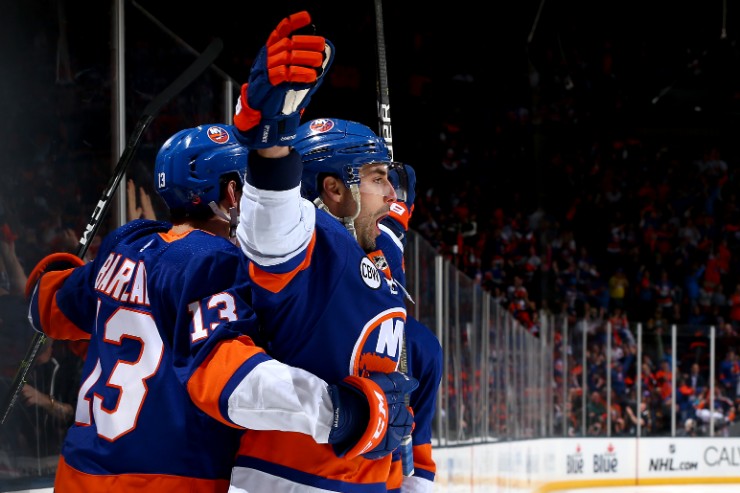 New York Islanders head coach Barry Trotz likes to describe some aspects of hockey in terms that are relatable to folks who have never laced up skates or picked up a stick.
So when asked about the suddenly-rekindling relationship between veteran winger Jordan Eberle and second-year center Mathew Barzal — who have combined for seven points in the first two games of the Islanders’ first-round series against the Pittsburgh Penguins — after spending most of the season playing on separate lines, Trotz went to what most fans can relate to.
Marriage.
“Sometimes it goes a little stale, you get a separate vacation and you come back and the love is back again,” Trotz said of his first line duo. “I think it just happens that way when you’re not feeling it and then you get back together and you get the joy of playing together and you have success.”

The two spent most of the 2017-18 season paired together on the Islanders’ second line where they added plenty of clout to the Islanders’ scoring attack. Eberle put up 25 goals while Barzal won the Calder Trophy as NHL Rookie of the Year with 22 goals and 63 assists under former head coach Doug Weight.
The offense took a step back under the Barry Trotz regime, a necessary byproduct of playing the structured, defensive style of hockey that has gotten the Islanders into the playoffs for the first time since 2016.
And the once-bountiful pairing of Eberle and Barzal simply didn’t do it for the new head coach.
“During training camp and early in the season, I had them together and they didn’t play well together so I never put them together,” Trotz said. “Obviously, we got on a little bit of a run with certain groups and stayed with it.”
But the offense dried up down the stretch as goals were at a premium for the struggling Islanders.
Looking for answers, Trotz reunited the two — this time on the first line — and the returns were exactly what the Islanders needed.
Barzal and Eberle once again played an enormous role in the Islanders’ 3-1 victory in Game 2 Friday night with a pair of points each to help give New York a 2-0 series lead.
The duo had assists on Anthony Beauvillier’s game-tying goal in the second period just 2:49 after Erik Gudbranson gave the Penguins a lead.
Eberle gave New York the lead with 12:06 left in the third period with a cool backhand finish while driving to the net off a Barzal feed.
“I thought Ebs’ goal was fantastic and was obviously a huge goal for us,” Trotz said.
It’s the exact kind of production the two were expecting when they were reunited.
“When Barry put us back with each other, we basically said, ‘We’re going to force him to trust us,’” Barzal said after Game 2. “We tried to make it so he couldn’t break us up. What we did last year was great, but it’s a new system and we had to play different. We’re not just out there gunning for points.”
“We like playing with each other,” Eberle said. “We play similar style games. We’re able to read off of each other. We seem to mesh.”
Call it the honeymoon phase, if you’d like, but the two have revitalized the Islanders’ first line at the perfect time as they have taken an early stronghold on the best-of-seven first-round series.
“They’re probably rooming together in Pittsburgh,” Trotz said jokingly. “Both Barzy and Ebs, they’re both attacking right now, skating well, playing off each other.”
Game 3 comes Sunday afternoon at 12 p.m. ET on NBC.