MedMen, a recreational and medical marijuana dispensary headquartered in Culver City, California, is coming to Fifth Avenue. According to Page Six, the store known as the “Barneys of Weed” is opening on April 20 (4/20, of course).

“We do not run pot shops, we manage class leading retail stores that happen to sell marijuana and marijuana products,” the company’s website states. (How Barneys-esque of them.)

MedMen, named one of Forbes’ top five financial leaders in the cannabis industry, was founded in 2010 by CEO Adam Bierman and President Andrew Modlin. It has stores in California and Nevada (where recreational use is legalized) and three medical dispensaries in New York (Manhattan will be its fourth in the state, and its first location in NYC).

“More style, less stigma,” CNBC’s Marcus Lemonis described when touring MedMen West Hollywood in August, equipped with sleek, consumer-friendly table displays promoting transparency: iPads with a library of information and clear-packaged marijuana samples, allowing you to inspect your weed through a magnifying glass and smell it via a sliding compartment. This setup — clean and mod — has been compared to the Apple Store. 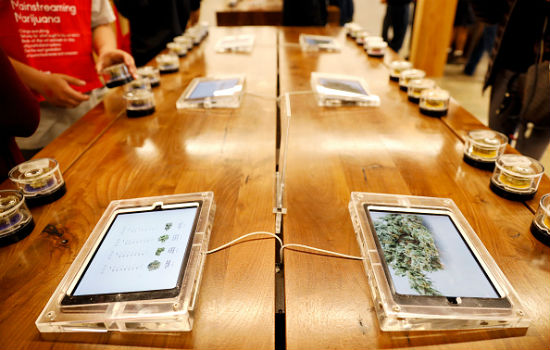 Bierman told Fast Company last month that their overall goal is “mainstreaming marijuana” so that the act of going out to buy recreational weed is just as common — and accepted — as “going to buy a new computer or a new set of headphones, or to get something fixed.”

Employees’ shirts read, “Shop. It’s legal,” or “Heal. It’s legal” (which is most likely what sales associates at MedMen Manhattan will be wearing). 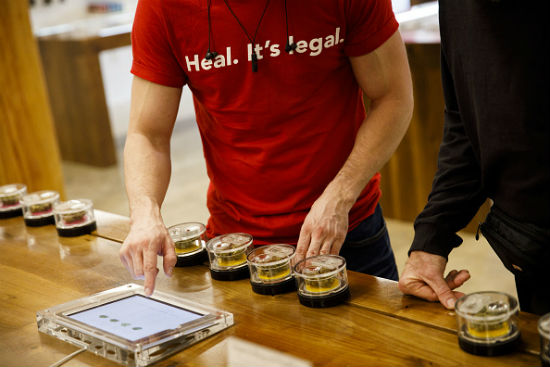 The Manhattan store will be located at 433 Fifth Ave., near Bryant Park and will offer marijuana to medically qualified state residents in the form of gel caps, edibles, vape pens and everything in between.

The 10,000-square-foot store will be the third medical marijuana dispensary in Manhattan, joining Etain, located near Grand Central, and Columbia Care, near Union Square.

“The future of cannabis is a mainstream shopping experience where responsible adults and marijuana patients can access products in an inviting and familiar environment, that’s what MedMen aims to offer,” Daniel Yi, MedMen’s SVP of Corporate Communications, told Metro in a statement. “We are proud to bring this experience to New York and showcase it in one of the most iconic shopping districts in the world.”

MedMen Manhattan, with its Apple Store standards and Barneys charm, will be opening its doors in two weeks’ time — conveniently on 4/20.