Are you one of the approximately 100,000 people (like me, hi!) expected at New York Comic Con this weekend? Were you hoping to get to NYCC 2018 by taking the almost-new 7 train extension to 34th Street/Hudson Yards, the only subway stop in the otherwise transit-barren west side of Manhattan where the Javits Center sits? Lol, nope.

In their Thanos-level wisdom, the Metropolitan Transit Authority has decided to suspend 7 train service in Manhattan during NYCC 2018 weekend so workers can perform signal modernization. Beginning at 12:15 a.m. Saturday, Oct. 6, service on the 7 train will end in Queens at Queensboro Plaza, and won’t resume until 4:30 a.m. on Monday, Oct. 8. At least out-of-town fans staying an extra night can get to your flights at LaGuardia Airport?

In place of the 7 train, the MTA is running free shuttle buses between Times Square-42nd Street and 34th Street-Hudson Yards, with promises of additional buses standing by in nearby depots to meet demand. Though anyone who’s seen the snarled mess of pedestrians and food trucks and rideshare cars the doorstep of the Javits becomes all weekend might think twice about that particular alternative. The Javits Center is also served by the M12 bus line. 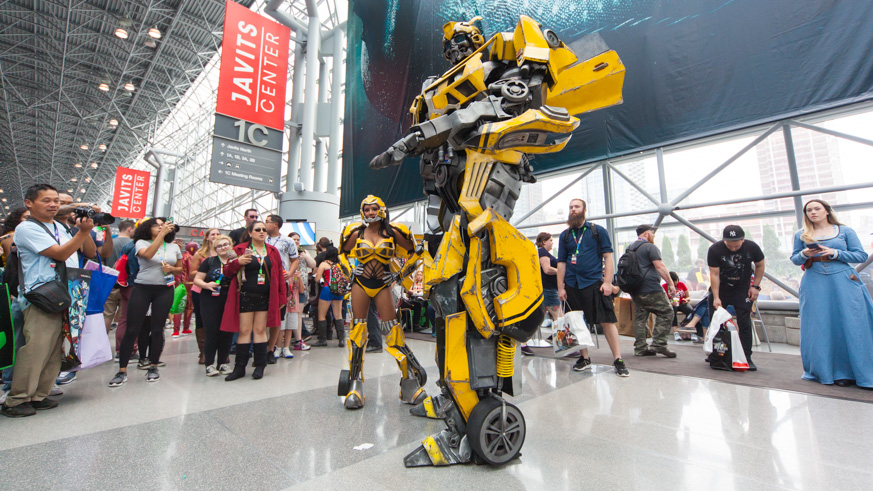 What’s going on with the 7 train during NYCC 2018 weekend?

We get that New York is a busy city. And having Citi Field at the end of the 7 line could’ve meant baseball season had a part in delaying repair work. But New York Comic Con has been held on the first weekend of October since 2010, which really ought to be on somebody’s calendar.

“We are in the final stretches of deploying new, modern Communications Based Train Control signals on the 7 line — which is absolutely essential to delivering more reliable and more frequent service on the 7 line for years and years to come,” says MTA spokesman Jon Weinstein. “The 7 line is on the precipice of a major, game-changing signalization upgrade for hundreds of thousands of daily riders, 2019 Comic Con attendees, and basically everyone — this weekend’s work is key to that effort.”

At least not using the 34th Street-Hudson Yards stop also means you won’t have to dodge mysterious ceiling water.