People have a lot of reasons to be walking on eggshells these days. For some, it could be navigating conversations. Or in the case of safety in the wake of so many public shootings, people are right to be constantly suspicious and to hold any evidence of danger as an alarm that should be blared at its loudest volume. The new film “Luce,” premiering this Friday, sets out to confront audiences with the issues of privacy, search and seizure, and privilege, all set in a place that may hit close to home for many American families: our school system.

The film, adapted from the play by J.C. Lee and directed by Julius Onah, follows the title character, Luce, played by Kelvin Harrison Jr., who was taken in by an upper-middle-class white family after growing up as a child soldier in war-torn Eritrea. Luce has grown up to be both an “A” student and an all-star athlete, but runs into trouble after he hands in an essay to his teacher Harriet Wilson, played by Octavia Spencer, that contains some troubling and potentially dangerous ideas. After Wilson alerts Luce’s parents Amy and Peter, played by Naomi Watts and Tim Roth, they must decide whether or not to defend him or act on their suspicions.

“You become active participants in this film. It’s not a passive viewing. … I love that there are loose ends, because nothing in life is tied up with a bow,” — Octavia Spencer 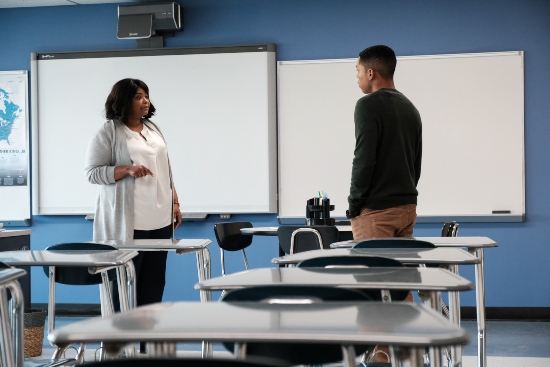 For actors Octavia Spencer and Naomi Watts, the opportunity to delve into such a vibrant piece of storytelling that would allow the audience to carry on the conversation once the credits start to roll wasn’t one to pass up. According to Watts, she initially signed on once she had discovered that Spencer was involved, but was blown away by the complexity of Lee’s story.

“Octavia was already attached and that was a big draw card for me,” recalls Watts, as I meet with both actors. “We had worked together before and I’m a big fan of her work as well. That made me read it right away and the minute I read it, I knew there was so much there. It made me think all day. I was walking around wanting to discuss it.”

Spencer agrees, and agrees that the space that the film occupied in her mind after reading it was the main draw for her to sign on to the project.

“I had actually met with J.C. about another project and he asked me to read ‘Luce.’ Then, like Naomi said, once you read it, you can’t get the characters and the story out of your mind,” says Spencer. “I kept wanting to relitigate it in my mind and take it from different perspectives. Then I thought, okay, I’m thinking about this way too much. I obviously want to do it. Even though I get nervous about Harriet in a lot of ways, I really enjoyed everything about it.”

The film plays the audience’s ideals themselves, letting them hear from all sides of the argument regarding the place of privilege where Luce is coming from and the hopes and dreams that good-hearted people in his orbit wish to push upon him and protect. To Watts, that kind of active participation is what makes the film such a poignant and important work.

“I think it’s very satisfying as an audience member to sit there and watch something and then realize. ‘Oh, I’m involved in this story, too!’” explains Watts. “It doesn’t just take place in the cinema. It’s going to live in your mind and there’s more for you to examine. Giving that much power to the audience and [having] that much faith in them, I think is incredibly satisfying. Yes, all of these characters are well-intentioned. They’re not evil people, but they get caught up in their myopic viewpoints and [in] trying to control things. [They] create identities for the vulnerable — that being Luce. That’s when things go a little wobbly because he starts pushing back and says, ‘I want to be in charge of my own identity.’”

The film practically hums with intensity throughout its duration, and will be one of the most talked-about films of the year as well as surefire awards contender. The arguments presented in Lee’s hauntingly timely narrative never lend themselves to solutions that are easy. All of the characters mean well, but their good intentions deserve asterisks next to them.

“All of those asterisks that you mentioned are really the ambiguities of life,” explains Spencer. “The only people we know how the story ends [for them] are the people who are no longer with us. Every day that you live, your story changes. The truth and perception changes. That’s what this movie is forcing the audience to do. You become active participants in this film. It’s not a passive viewing. … I love that there are loose ends, because nothing in life is tied up with a bow.”

Check out the trailer for ‘Luce’ starring Naomi Watts and Octavia Spencer below.