Need a ride to March For Our Lives? Take this free service - Metro US
The Big Stories

Need a ride to March For Our Lives? Take this free service Last week, schools nationwide participated in the Enough! Walkouts in a powerful display of objection to gun violence. March For Our Lives is this Saturday, March 24, and rallies are taking place across the globe to call on congressional action.

In solidarity with the Parkland survivors and their supporters, Lyft is giving free rides to the March For Our Lives rallies in the U.S.

A letter shared on Twitter by the March For Our Lives account at the beginning of the month reads, “We believe there is something wrong when the threat of gun violence is so frequent and real throughout our country. And like many, we are inspired by your leadership.” It’s signed by Lyft’s co-founders.

We’re so excited to see @lyft‘s support of #MarchForOurLives! Thanks for marching with us ? pic.twitter.com/2B2P8OVTaj

“Thank you for speaking up and showing the world that young people can drive meaningful change,” the letter concludes. “We will continue using our voice and platform to encourage civic participation.”

Lyft reminded potential riders that anyone under the age of 18 must be accompanied by an adult — and given that the movement was started by high school students, this is important to remember when you’re getting into a Lyft on the day of March For Our Lives.

So, Lyft is giving free rides. What about other services?

Well, we did some digging and found that similar apps and car sharing services (Arro, Fasten, Via and Juno, to list a few) are not giving free rides to March For Our Lives like Lyft.

A spokesperson from Uber, the service that Parkland shooter Nikolas Cruz took to Marjory Stoneman High School, told Metro that they are not following suit but stressed that they have a policy of no firearms in their vehicles.

The Uber driver who gave Cruz a ride to his former school on Valentine’s Day said she was told the backpack that held his AR-15 was for his guitar. Cruz had said he was going to music class.

Back in 2016, Uber stopped its service for one minute after a week of shootings in the south — Minnesota and Louisiana where police killed two black men, and then Texas where five police officers died during a Black Lives Matter protest shootout. Users who opened up the Uber app at midnight on July 9, 2016 saw the following message, which counted down a moment of silence: “1 minute to reflect on gun violence.”

A longer message read, “Our hearts go out to the victims of this week’s terrible gun violence. As a show of solidary to all affected, you’ll see a peace sign in our app. As we move around our cities this weekend, let’s take a moment to think about what we can do to help.”

How to attend March For Our Lives

RSVP to March For Our Lives on the campaign website. And if you’re not going to the main event in Washington, D.C., you can find a local march organized in conjunction with it. There are over 750 events worldwide on March 24.

If there are no events happening nearby, March For Our Lives also urges you to organize your own and gives you a way to do so.

People will be taking the streets from coast to coast and overseas. Worried about how you’ll pay to protest in places like NYC and Boston? Take a free Lyft and let your voices be heard. 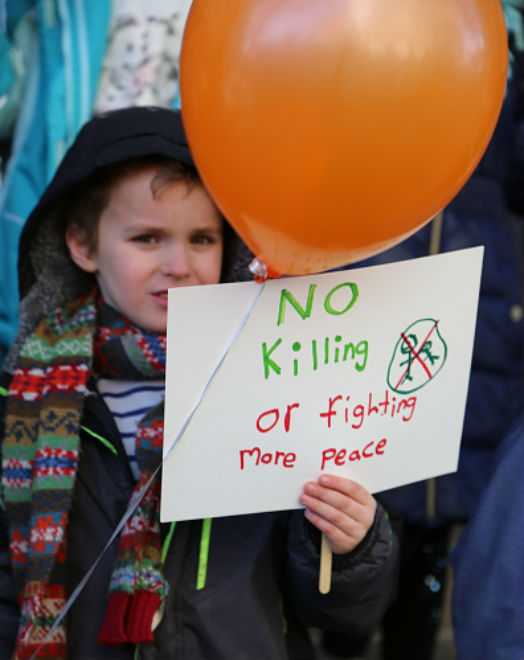