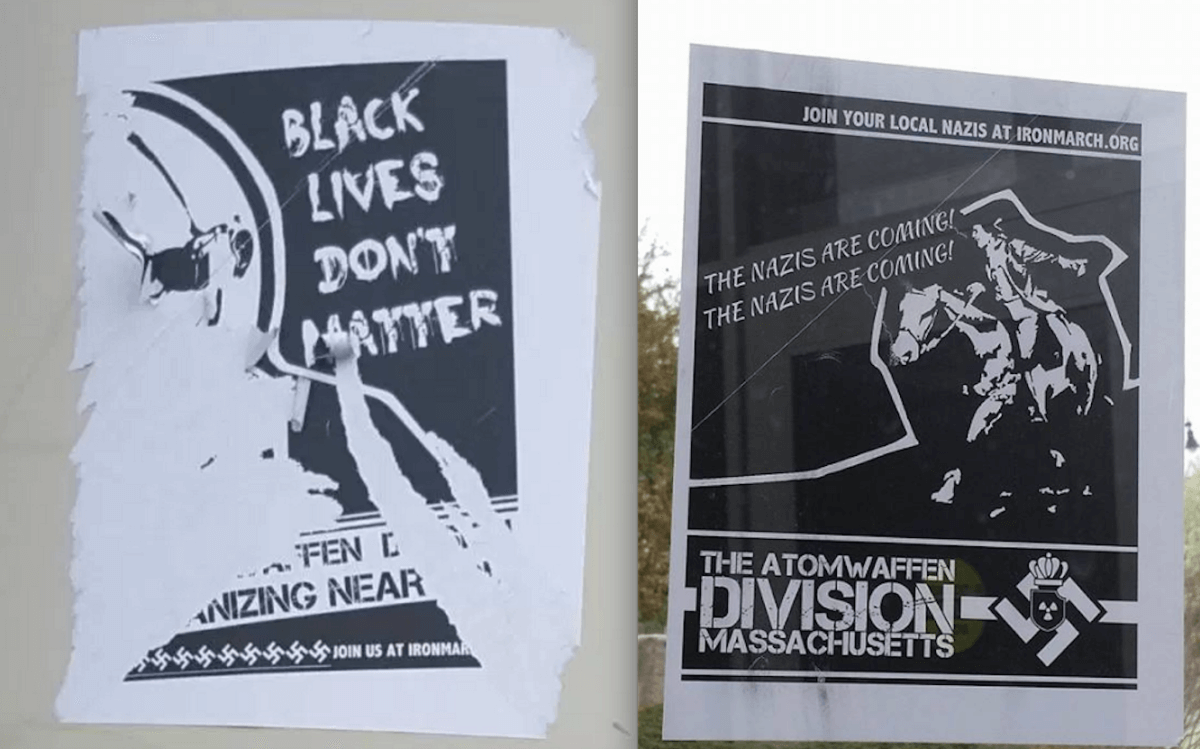 Update: Boston University President Robert Brown addressed the fliers in a letter to the community on Tuesday.

An investigation is underway at Boston University after fliers apparently linked to a neo-Nazi organization popped up on campus this weekend.

Photos of the postings appeared on Facebook on Sunday. One includes the phrases “The Nazis are coming!” and “The Atomwaffen Division Massachusetts” along with a link to a shadowy online fascism forum called IronMarch.org. Another reads “Black Lives Don’t Matter.”

The BU Police Department is “currently investigating who put up the posters,” university spokesman Colin Riley confirmed on Monday. “We take it seriously and will see what charges we are able to file as a result of the investigation.”

Riley did not answer other questions about the posters, or about how the private university plans to respond.

A thread on the forum site describes the “Atomwaffen Division” as an “ideological band of comrades who do both activism and militant training. Hand to hand combat, arms training, and various other forms of training. As for activism, we spread awareness in the real world through unconventional means.” Late Monday, the group’s site was replaced with the message “account suspended.”

The news site The Tab reported on Sunday that the posters had been spotted outside FitRec, a gym, and inside Warren Towers, an on-campus residence.

One poster, in black-and-white, reads, “Boston University you have been visited by AtomWaffen Division. Join your local Nazis!”’

“It’s obviously disconcerting,” said Zachary Bos, a BU administrator, in an interview. “I’m disappointed that there is a person in our neighborhood or on our campus who is not plugged into the better sense of our values and a greater sense of community.”

Bos, an administrative coordinator for undergraduate curriculum, said Monday he hadn’t heard any announcements about the posters from leadership at the school.

He also said he has brought evidence to police that he culled from the online forum suggesting a student might be involved.

This isn’t the first time Boston University has been targeted with hateful speech.

The school last year investigated posters tied to a white supremacist group, which appeared around campus amid controversy over tweets from incoming Assistant Professor Saida Grundy.

Another group in the past has also solicited essays from students denying the Holocaust, Bos said.

Earlier this year, BU was among schools impacted in March by a cyberattack that caused printers to spit out anti-Semitic fliers.

The incidents send a disturbing message because advocacy from the hate group has moved from the Internet to the real world, said Robert Trestan, director of the Anti-Defamation League of New England.

“In this country, people can believe whatever they want, but the concern is: What happens when people start acting out on some of those beliefs?” Trestan said.

He said the ADL has reached out to BU. He also urged the college to confront the neo-Nazi rhetoric that arrived on campus this weekend.