Before it became ground zero for all things trendy, the North Brooklyn neighborhood of Greenpoint was shaped up by a strong Polish heritage. The Polish Cultural Institute New York (PCI) is looking to preserve the neighborhood’s identity by organizing “ZIEMIA: Picnic on Earth” on June 9th. The event is a partnership between the Institute, NYC Parks, the Open Space Alliance for North Brooklyn, and foremost, the visual artist Martynka Wawrzyniak.

The unveiling of her new public artwork, Wawrzyniak's Ziemia (Earth in Polish) stresses the multicultural roots of these Greenpoint residents. The sculpture itself is in the shape of an orb and it’s glaze is made of a mixture of Greenpoint clay and soil excavated from the homelands of today’s neighborhood inhabitants: the United States, Poland, Ukraine, Germany, France, Japan, Serbia, Nepal, the United Kingdom, Ecuador, Mexico, and Namibia.

The project has a strong Polish focus honoring people who lived here for generations. By including and engaging Polish Greenpointers through workshops in schools, art centers, and just through simply reaching out to the community, the artist was able to collect a wealth of information about their cultural roots in the neighborhood. All of this work will culminate in a free afternoon celebration full of events highlighting the vibrant Polish heritage as well as backgrounds all of the other residents in Greenpoint.

"An extraordinary moment for Poland took place a hundred years ago: we regained the independence," says Anna Domanska, Acting Director of the PCI. "Yet for 123 years, Poles had not been free and many of them sought a new home abroad, including here in the United States. Many settled in New York – today in the US we have around 10 million people of Polish descent, of whom more than 400,000 live in the Big Apple. On the centennial of Poland regaining its independence, the Polish Cultural Institute New York and the artist wanted to give a gift to the New York community of Greenpoint,  which so many Poles have called their home. We wanted to celebrate freedom and diversity together with all the other inhabitants of this neighborhood." 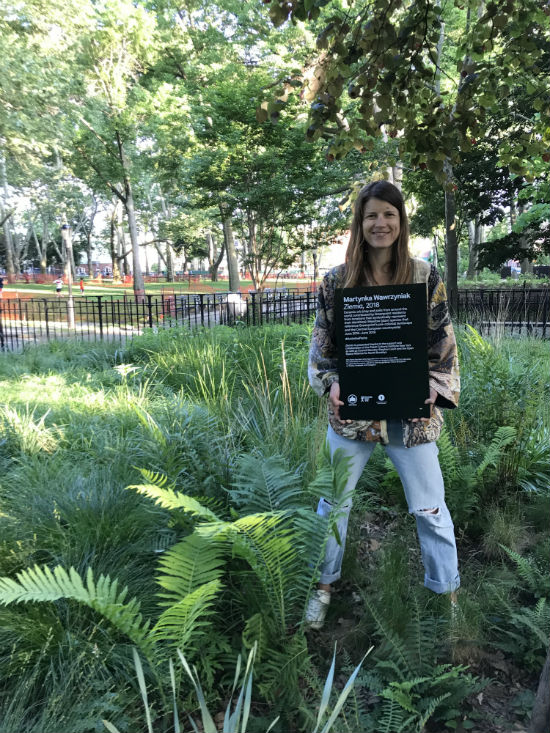 This event will kick off at 2 pm with an ecological workshop for kids. They will play with clay, seeds and other natural resources to create art that will help to revitalize McGolrick Park. Next up, there will be remarks by the PCI, the local politicians, the artist, and Geoffrey Cobb, author of “Greenpoint Brooklyn's Forgotten Past.

As a complement to the sculpture, there will be an opening of the exhibit titled “What Defines Greenpoint Identity.” Curated by Magdalena Mazurek it reflects on the footprints generations of immigrants have left throughout the years in this rapidly gentrified neighborhood.

Next up, there will be a live performance by  Polish singer and violinist Karolina Beimcik and her band Zorya (Rafal Sarnecki- guitar, Matt Aronoff- double bass.) who create Slavic tinged jazz that harkens back to a long rich tradition. Alex Storozynski – former editorial board member at the Daily News - and Mike Batthany will perform a short set including a debut song on Greenpoint! Followed by jazz by Jesse Lynch Ensemble.

Throughout the day, The Polish Cultural Institute will be running “Sto Lat, Polska! A Postcard To Poland” project inspired by 1926 campaign when a birthday card was sent from Poland to the U.S. with five and a half million signatures from Polish citizens. In the year of Polish centennial of regaining independence the Institute initiated a similar action but from the US to Poland, and with a helpful tool – Internet. People will have the chance to log on to 100latpolska.com to submit their own decorated postcards. With only a few clicks, they will  enter to for a chance of winning a free trip to Poland. Join and help them beat 5.5 million signatures Poles collected in 1926.

And hey, did we mentioned the free Polish bites that will be provided? It is a picnic after all!