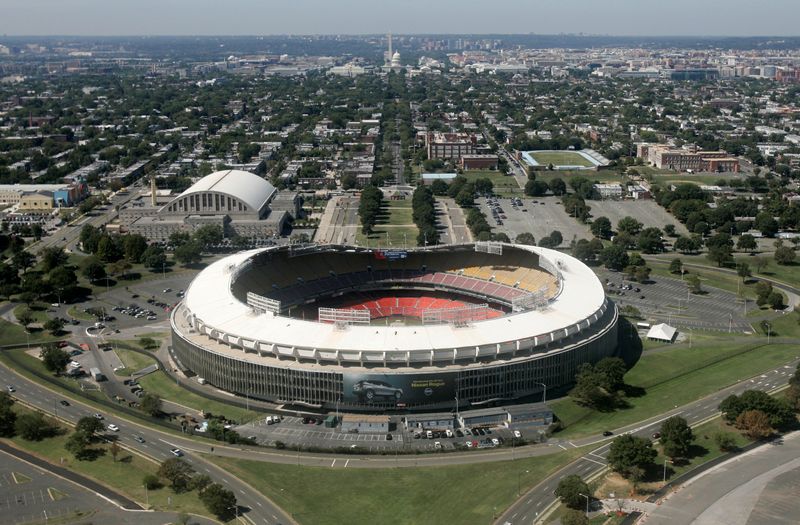 (Reuters) – A memorial to late Washington Redskins owner George Preston Marshall, who fought against the racial integration of the National Football League, was removed from RFK Stadium on Friday, the company in charge of the property said.

Although NFL teams signed individual Black players as early as 1946, Marshall refused until the federal government stepped in and, in 1962, Hall of Famer Bobby Mitchell joined the team.

“This symbol of a person who didn’t believe all men and women were created equal and who actually worked against integration is counter to all that we as people, a city, and nation represent,” Max Brown and Greg O’Dell of Events DC said in a statement.

“We believe that injustice and inequality of all forms is reprehensible and we are firmly committed to confronting unequal treatment and working together toward healing our city and country.”

The removal came on Juneteenth, a holiday commemorating the end of Black slavery, and as The Washington Post https://www.washingtonpost.com/opinions/change-the-name-of-the-washington-nfl-team-now/2020/06/19/4d0b4434-b0ce-11ea-8758-bfd1d045525a_story.html editorial page called on the team to change its name, which is widely viewed as a slur against Native Americans.

The Post said Redskins team owner Dan Snyder should make the change after the death of George Floyd, a Black man, in police custody in Minneapolis last month set off widespread protests against racial inequality.

Snyder has been adamantly opposed to changing the name. The Redskins did not immediately respond to a request for comment.

The Minnesota Twins took down a statue in front of their ballpark honoring their racist late team owner Calvin Griffith on Friday.

Last week, a statue of Italian explorer Christopher Columbus was taken down at the Minnesota state capitol and statues of Confederate leaders have been toppled around the country.