Mo’s Coffee Cart is a familiar site on Delancey Street in the Lower East Side, but on Friday, it was adorned with something new: a decal for an ‘A’ letter grade, marking the start of letter grades for New York City food carts and trucks.

Mahmoud Abdel Wahed, owner of Mo’s Coffee Cart, was one of the first food vendors to receive a letter grade from the city health department as part of a new program to ensure safety standards across all New York City food trucks and carts as is already implemented with restaurants.

It was a surprise to Wahed when the inspector came — just like how restaurant inspections are not announced to owners — but he has always known he’s had to keep things clean. If he hadn’t gotten an ‘A’ grade, he said, he “couldn’t come into work.”

Wahed has been at this spot for 18 years and has a slew of dedicated customers already, like Germa Renauvin who stopped by on Friday. She comes to Mo’s Coffee Cart every morning, she said.

“I’m happy for him,” she said of his letter grade. She’s always trusted him anyway, she added, but said that she will start paying attention to the grade decals on New York City food carts.

The legislation to grade mobile food vendors was passed in November, sponsored by Council Member Karen Koslowitz. So far, officials have graded 24 New York City food carts, 20 of which received ‘A’ letter grades.

It will take about two years to grade the approximately 5,500 food carts and trucks across the city. Currently, the health department has more than 100 inspectors. Additional inspectors have not been hired with the rollout of mobile food vendor grading.

“This is an opportunity to remind New Yorkers that we don’t grade on a curve,” Health Commissioner Dr. Oxiris Barbot said in front of Mo’s Coffee Cart Friday morning. “An ‘A’ is an ‘A’ is an ‘A,’ whether it’s a restaurant or a mobile food truck.” 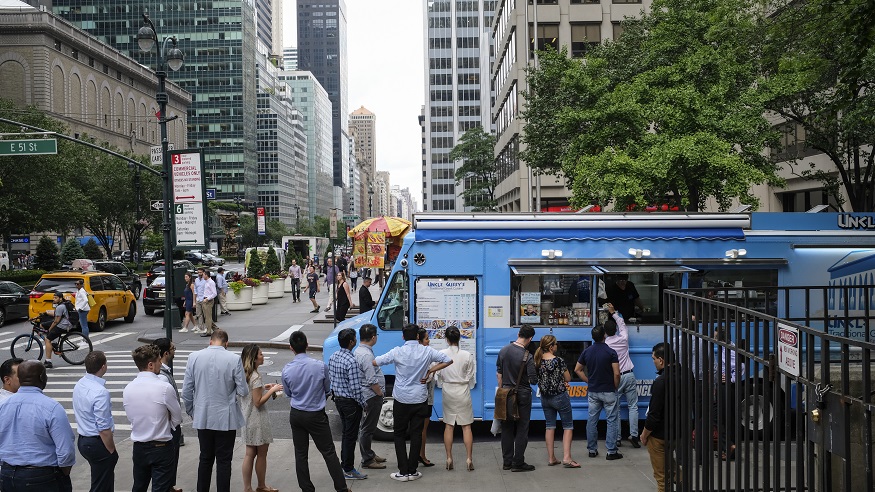 This is building on the city’s restaurant letter grading program, which began in 2010. Mobile food vendors will be held to the same standards as restaurants, and the lowest grade a New York City food cart can receive and still remain open is a ‘C.’ If a food cart or truck earns an ‘A,’ the department will wave any fines for violations.

The inspections consist of two parts, and when New York City food carts and trucks go in for their initial step, a location sharing device will be installed on the vehicle. That will be turned on only during inspections when officials head out to the carts, Barbot said, since these carts often move to different locations.

The city will set up an online database searchable by the food carts’ names or by the location of their last inspection. The letter decals on the New York City food carts and trucks cannot be tampered with, according to Barbot, and any attempt to remove or mess with them will render them invalid.

Carts and trucks will be re-inspected based on their permit, with seasonal and 1-year permits inspected every year and two-year permit vendors every two years.