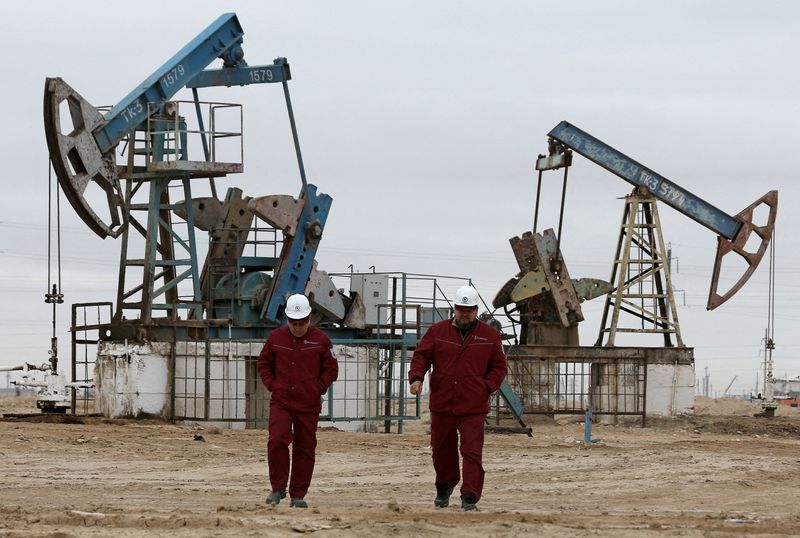 FILE PHOTO: Workers walk as oil pumps are seen in the background in the Uzen oil and gas field in the Mangistau Region

The market rebounded late in the session after losing ground for most of the day, in part due to strength in the dollar and as China grapples with fresh coronavirus outbreaks that are sapping demand. However, Russia’s move to cut off gas shipments to two European nations added to overall worries about tight energy supply.

The U.S. Energy Information Administration said crude stocks rose by just 692,000 barrels last week, short of expectations, while distillate inventories, which include diesel and jet fuel, fell to their lowest since May 2008. [EIA/S]

The drop in distillate stocks helped boost U.S. heating oil futures to an all-time closing record at more than $4.67 a gallon. Refiners process crude into diesel, jet fuel and other products, and U.S. refiners have been running at high rates to meet demand, particularly in Europe, a big user of diesel fuel.

Energy markets worldwide are dealing with massive disruptions to supply following Russia’s invasion of Ukraine and subsequent sanctions slapped on Moscow by the United States and its allies.

U.K. major Shell said it would no longer accept refined oil blended with Russian products, according to trading documents, while Exxon Mobil said it had declared force majeure on its Sakhalin-1 operations in the far eastern part of Russia.

This week, Moscow escalated its use of energy as a cudgel against countries opposed to the invasion. Russian energy giant Gazprom said on Wednesday it halted gas supplies to Bulgaria and Poland.

“Russia wants the payments in roubles for gas, and the fear is that before long they may want to do the same with oil,” said Claudio Galimberti, senior vice president of analysis at Rystad.

European Commission Chief Ursula von der Leyen said Russia was using fossil fuels to blackmail the EU but added the era of Russian fossil fuels in Europe was coming to an end.

The market earlier in the day had been pressured by a rally in the dollar, which hit a five-year high. Since most oil trade is conducted in dollars, a rising greenback makes oil purchases more expensive for holders of other currencies. [FRX/]

China’s central bank said it would step up monetary policy support as Beijing races to stamp out a nascent COVID-19 outbreak in the capital and avert the same type of debilitating city-wide lockdown Shanghai has been under for a month.