Oprah Winfrey, the billionaire media mogul who is recognized as one of the most influential women in the world, uses art to keep her grounded.

Last week, Winfrey was honored for her career and cultural impact with her own exhibit at the Smithsonian National Museum of African American History and Culture (NMAAHC) called “Watching Oprah: The Oprah Winfrey Show and American Culture,” which opened June 9 and will run through June 2019.

Although Winfrey has her very own exhibit at an art institution dedicated to the African American experience, she keeps a special artwork at her home to keep her grounded.

During NMAAHC’s inaugural Women’s E-3 Summit on Empowerment, Entrepreneurship and Engagement, Winfrey explained how she keeps a six-foot tall painting in her house of an enslaved African American woman on the auction block holding her daughter’s hand to keep her grounded — and to remind her to never forget the people who have made it possible for her to be where she is today. The billionaire says she has owned the painting for 30 years.

The painting is titled, “To the Highest Bidder” by Harry Roseland. According to the billionaire media mogul, she placed the six-foot tall painting at the center of her house to symbolize the foundation of her life. Winfrey explains that the location of the painting forces her to see it whenever she moves about the house.

‘To the Highest Bidder’ by Harry Roseland 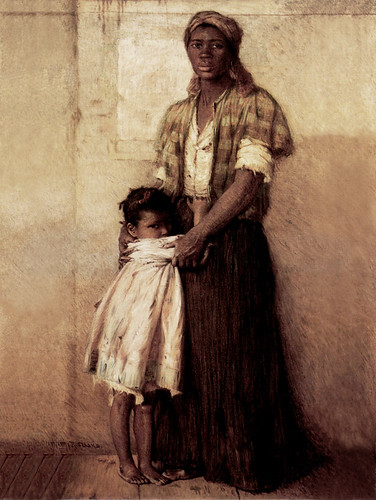 In addition to the painting, Oprah also said that she has a framed list of enslaved African American people listed in ledgers next to other property such as cows, horses and buggies. The media mogul said she often stops in front of the list and speak their names out loud along with their ages and the prices they are being sold for and then reflects on the fact humans were being sold like livestock and work tools.

“And I force myself to observe the absurdity and the obscenity of prices being affixed to each one should they be placed up for sale,” Winfrey said.