The Athens, Georgia, rock institution Drive-By Truckers have always struck a great balance between never shying away from the ugly truths of modern American life while delivering these unfortunate messages with a life-affirming grin. The band’s two chief songwriters, Patterson Hood and Mike Cooley, weave stories of the downtrodden and forgotten with depth and pathos into the band’s patented mix of Skynyrd Southern rock, Neil Young dirge, and the sneer of The Clash.

The band’s 2016 album “American Band” found both Patterson and Cooley writing some of the most of-the-moment and politically charged material the band had ever released up to that point. Songs like the Hood ballad “What It Means” spoke frankly about the racial divisions in our country, the Black Lives Matter movement and the need to address the senseless police shootings of young black men on a far-too-frequent basis. The record was written and recorded before the 2016 election and, unfortunately, has only become more powerful in its message with time.

“What’s even shocking anymore? It’s like, ‘Oh, an orangutan took over the White House.’ Oh, s—t. Well, maybe that might be an improvement.” – Patterson Hood, Drive-By Truckers 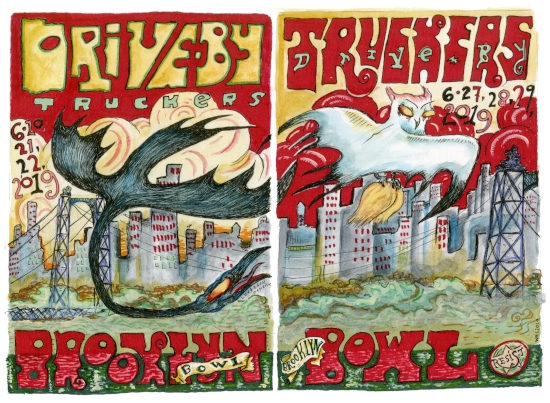 “Unfortunately, it’s become more timely,” says Hood, who spoke with me over the phone from his new home in Portland, Oregon. “Artistically, that’s maybe kind of cool. But, as far as living in the world, it’s not. It would be probably better if it was kind of dated and you heard it and you thought, ‘Oh, that’s an artifact of that era back when that terrible s—t used to happen.’ By the time the record came out, it was in the full heat of the fall election season. We really went into the tour thinking that the next year, our record would be kind of this obsolete thing. Of course, that didn’t turn out to be the case at all, unfortunately. Who knows what’s going to happen now? The news has gotten so f—ing crazy that if I woke up one morning and someone said that the Planet of the Apes had started happening, or something… What’s even shocking anymore? It’s like, ‘Oh, an orangutan took over the White House.’ Oh, s—t. Well, maybe that might be an improvement.”

While touring the record, the band dubbed themselves the “Dance Band of the Resistance” and were sometimes met with confrontation from fans in red states along the way. Hood and the Truckers are currently putting the finishing touches on the follow-up to “American Band,” for a release sometime early next year. For Hood, the work they did on the last record is far from being over. How can you write about anything else with all of the insane things coming down the newswire on a daily basis?

“It’s probably just coming to terms with this world that we’re in right now,” Hood says of the new material. “It’s maybe not as blatantly political as the last album, but it’s definitely part of it. But a more, kind of personal slant of it, I guess. How do you explain this s—t to your kids?”

I had to laugh to myself, and told him that was a pretty good title for the record. “That’s probably a better title than any title we have right now. We’re still figuring out that. That actually probably is not a bad title, ‘Drive-By Truckers: How to Explain This S—t to Our Kids.’”

The band will be taking over Brooklyn Bowl for six shows over two weekends in June. While many bands with similar-sized catalogs tend to visit specific moments in their careers by playing classic albums in full, Hood feels that sort of discipline goes against the freewheeling nature of their live shows. Besides, with all of the personnel changes the band has gone through in their 20-plus years — namely the exit of Jason Isbell, who was with the band for some of their most acclaimed records — it might just not be in the cards.

“I don’t know. We’ve never really done album shows, other than when ‘Southern Rock Opera’ first came out,” explains Hood of this improbable scenario. “It’s weird ’cause we’ve been together so long, but we’ve also had a lot of former members. If we did ‘Decoration Day’ in its entirety, what would we do about two of the best songs on that record? Somebody [Isbell] that’s no longer in the band. He’s doing those songs in his show, which is great, and with his kick-ass band. So there’s kind of that. We’re now over seven years into this lineup without any changes, which is amazing. But before that, we never did more than two records in a row with the same lineup. ‘English Oceans’ was the first time that, all of a sudden, it became super stable, which has been great. I feel like we kind of have the band now that — hopefully — we’ll have as long as we’re able to do this. Until we’re too old to do this anymore, which hopefully is no time too soon. The other thing about it is that we don’t ever do a set list. So, imposing a theme on it all of a sudden, that would mean we’d have to write it down and follow a set list. I don’t know how that would work with how we do our show, because it’s so much of the show that we don’t have a set list. It becomes kind of the sport of making it feel seamless, like there’s a set list when there isn’t one. Which doesn’t always work. But on a good night, it does. On a good night, it’s boom, boom, boom, boom, boom. Cooley and I go back and forth, and we have elaborate hand signals and s—t. To cue each other what’s coming. It’s like a baseball game or something. A different hand signal to the guitar guy so that the right guitar is there for the next song. If all of the sudden we were following a set list, I’m afraid we would just… I don’t know what would happen. We might break.”

Make sure to get tickets to see the Drive-By Truckers during their six-night run at Brooklyn Bowl, June 20-22 and June 27-29.

Check out a performance of Patterson Hood and the Drive-By Truckers performing “What it Means” below.