Pearl Jam guitarist Mike McCready is a very curious person. If you have ever seen him perform onstage, you know full well how excitable and dialed into the material he gets, night after night, as he attacks each classic song like the legendary band is bringing it out of the practice space for the very first time. With his newest project, “Infinite Color and Sound,” his collaboration with New York- and Seattle-based artist Kate Neckel, the two artists will be going on a short tour where they will be trading instruments and paint brushes back and forth to create a unique evening of art and music in front of a live audience.

As a rock musician in one of the biggest bands of the past 30 years, McCready has always had the urge to mix things up while off the road. The initial germ of this idea came after his wife, Ashley O’Connor, told him that he should check out Neckel’s show “Stories” at the Winston Wachter Gallery in Seattle. He loved what he saw and began to strike up a friendship and mutual appreciation of the arts with Neckel. 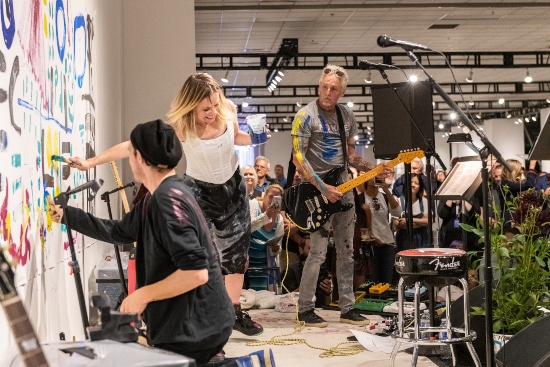 “I really loved her work when I saw it and I asked her questions about every single piece, which had to be irritating, but she was very nice to me. I appreciated it,” said McCready when I spoke with him and Neckel over the phone. “I had mentioned, casually, that I had always wanted to do some sort of a Warhol Factory-type multimedia thing for the last 25, 26 years. I don’t know what that was, but it was something that would be involving music, painting, art, photographs, or all that. And then Kate understood that from the beginning, as an artist from New York City, and kind of said, ‘Hey, I know what you mean.’ And she was the first one to ever respond to that.”

Neckel was more than game for this sort of cross-medium collaboration that McCready had been craving. “I had had a similar desire to collaborate on the same type of vision that Mike was telling me about and he was speaking my same language,” she explains. “I was like, ‘I totally get it.’ Then we said, ‘Let’s try. Let’s, you know, give this a go.’ So I think a few weeks later I brought a roll of canvas over to the studio. And he started playing guitar and playing keyboards and I just started and I moved my paintbrush around to what I was feeling based on what he was playing. And then it grew from there.”

What the show has become is a liberating exploration for both artists to create without hesitation or reservation. Either Neckel or McCready will start painting or making music on guitar or keyboards, and the other will change their direction in response. Then, when things are getting into too much of a rhythm, the artists will switch their preferred medium for the other’s to get out of their comfort zones. This kind of freefall into visual art was something that both excited and scared McCready. But of course, Neckel was there to push and encourage him from the very start of this new partnership.

“I was playing off of what she was creating, trying to do a soundtrack for what she was doing and then she would go a certain way. I wasn’t thinking about it. It was more of a feeling thing. I got the canvas that she had painted on the floor and then the tricky part was when we switched, she would play guitar later and then I would paint a little bit. And that was, for me, that was the scary part because I’d never painted before. It was terrifying for me cause I felt, am I going judged? All of this baggage that I’ve held on to for so long in terms of my inability to do things on certain levels was coming out right then. It was silly, now I’m thinking about it. But it was very freeing in terms of getting her advice and just saying kind of like, ‘Go for it.’”

What excites Neckel the most is the spontaneity of the whole project. “I think that every time we do it, you know, it changes and it’s based on whatever — it changes every time. But we just always, I think, just want to tell the truth and be vulnerable and be open and have a good [time].”

While the future is certainly unwritten for this tour, McCready and Neckel will be performing at Public Arts on Thursday, Sept. 19, and hope to be inspired to create by this ever-vibrant city.

“I think that the vibe of New York, that intensity, will add to it,” McCready says. “Hopefully that will come out.”

Make sure to grab tickets to see Mike McCready and Kate Neckel perform “Infinite Color and Sound” at Public Arts on Thursday, September 19.