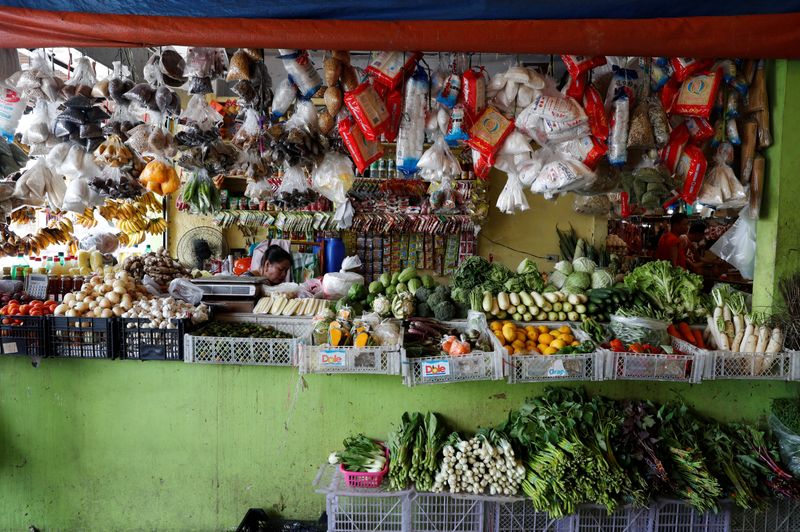 A woman waits for customers inside a food market in Paranaque, Metro Manila

MANILA (Reuters) – Philippine inflation picked up faster than expected in June as economic activity gradually resumed with the easing one of the world’s longest coronavirus lockdowns, driving food and fuel prices as well as the transport index higher.

The consumer price index rose 2.5% in June from a year earlier <PHCPI=ECI>, after posting a four-month deceleration to 2.1% in May, the Philippine Statistics Authority said on Tuesday.

The headline figure was near the upper end of the central bank’s forecast range of 1.9% to 2.7% for the month, and faster than the median 2.2% estimate in a Reuters’ poll.

Inflation averaged 2.5% in the first six months of the year, below the mid-point of the official 2%-4% target.

Core inflation, which excludes volatile food and fuel prices, was 3.0%, up from 2.9% in May <PHCPXY=ECI>.

Despite looser restrictions, however, economists expect domestic consumption to remain sluggish in the second half, keeping price pressures in check.

After slashing its benchmark interest rate <PHCBIR=ECI> by a total 175 basis points this year to 2.25%, BSP Governor Benjamin Diokno has said the central bank remains committed to deploying a full range of monetary instruments and regulatory relief measures as needed to support growth.

The benign inflation will allow the central bank to keep its accommodative stance, but further rate cuts “are off the table for the time being”, said Nicholas Mapa, senior economist at ING.

“With the BSP’s real policy rate now negative (-0.25%), we reiterate our expectation that the central bank will refrain from cutting policy rates further and look to additional liquidity enhancement measures should the economy needs more stimulus,” he said.