For showgoers in New York City, sometimes things can get a little stale. Mid-sized venues can be oversaturated with predictable overlapping schedules and bigger venues can have a stuffy IMAX-level that is anything but intimate. Out in the quaint southern Brooklyn neighborhood of Red Hook, the eclectic art space Pioneer Works is setting the notion of what a traditional concert can be on its ear. 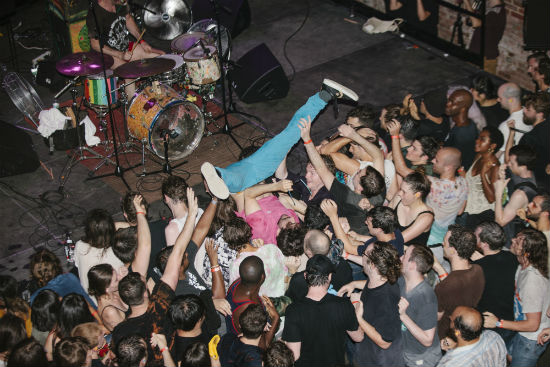 This multimedia arts space first opened its doors in 2012 with a mission to bring a new cultural space to the neighborhood with an emphasis on experimentation across mediums of music, performance, and visual art. I caught up with the venue’s Director of Music Programming Justin Frye over the phone while he was on tour with his own band PC Worship to talk about why this venue is so special.

“I think the intention is to make art and cultural space,” explains Frye, “a space that’s sort of malleable and diverse that’s open to interpretation. Musically speaking we’ve had so things over the years that have crossed so many different genres and have represented so many different styles of music. The first time I ever went there it was because I had played a show there and then I freelanced as an audio engineer and every time I went there it was a totally different experience.”

That is exactly what you will get when you head to this off-the-beaten-path venue. Whether it’s with a totally immersive and mind-altering art exhibition like tonight’s opening reception, Matthew Morocco Orchid: RGB or Monday night’s performance from long-running UK experimental rock band This is Not This Heat, the programming at Pioneer Works is meant to bring you out of your shell. Frye believes that it’s the staff passion of the arts that brings out the dedication for excellence in the venue’s staff.

I think that the reason that a lot of things get programmed at Pioneer Works is that — and I hesitate to use the word curation. Because it’s more about building on community and just being receptive and connecting the dots in a lot of ways,” says Frye. “But, I and other people involved in music programming are primarily artists and musicians. The same goes true across the art, technology and science departments. Everyone that works and programs the space is active in their medium and field. As a result, you have this magnetism towards more involved and thorough programming. Whereas in other places that are more venue specific, I’ll pull up a calendar and it will be more saturated. The business model runs on a day to day practice and selling drinks. But for us, it has to be something that we’re all really invested in for it to even be executed.”