Project takes NYC’s LGBT history out of the closet, and into the spotlight - Metro US
New York

Project takes NYC’s LGBT history out of the closet, and into the spotlight When the Stonewall Inn in Greenwich Village was designated a National Monument in 2016, it was the first and only historic site out of about 92,000 in the National Park System to be recognized for its connection to the LGBT community. After a police raid of the gay bar in 1969, riots there sparked the gay rights movement.

Now, in 2018, there are still less than 20 sites on the National Register of Historic Places recognized for their tie to LGBT history, out of more than 93,000 properties across the country, said historian Jay Shockley.

The New York City LGBT Historic Sites Project, which Shockley co-founded with Ken Lustbader and Andrew Dolkart, has been responsible for the national listing of six of those sites.

But that’s just the beginning. Through their project, they’ve identified hundreds of historic LGBT sites across all five boroughs that show the timeline of that community way before, and beyond, Stonewall.

LGBT history predates Stonewall by hundreds of years, Lustbader said, and the project has identified about 400 properties around New York City from the 17th century to the year 2000, and they’re continually adding more.

“This is a cultural heritage initiative,” he said. “It’s about place-based history, like residences, performance venues, commemorations — showing that LGBT history is American history by creating a physical landscape.”

These sites are listed on the project’s website at nyclgbtsites.org via an interactive map, and the founders hope people use that to create their own historical tour of the city. And, these places aren’t just interesting or relevant to those within the LGBT community, they say. 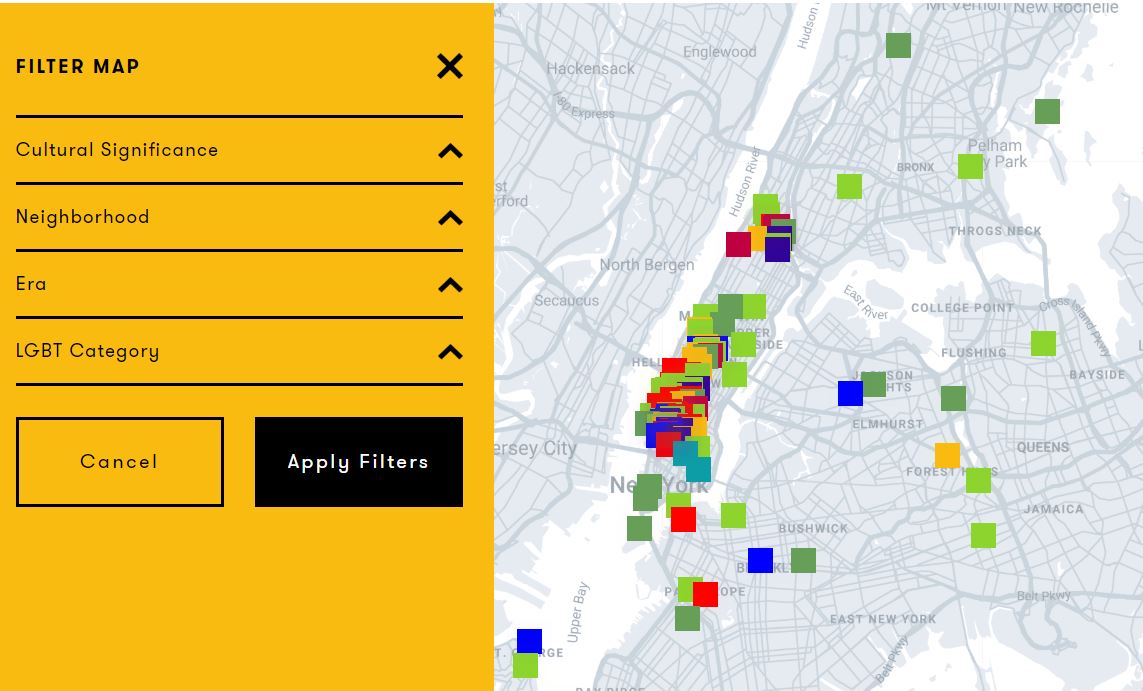 “We’re the only project, as far as we know, in the United States that looks at it both ways, [meaning] the influence of the LGBT community on American culture, not just sites that are important to the community itself,” Shockley said.

They’ve highlighted LGBT artists who have influenced all sorts, like where author Truman Capote lived to buildings designed by LGBT architects.

“What they’re trying to do is bring LGBT history out of the closet and into the spotlight, because LGBT history is New York City history, is American history,” said Kerry McCarthy, program director for arts and historic preservation with the New York Community Trust.

The Trust is a community foundation that funds nonprofits with the goal of improving the city. It was the first private funder of the NYC LGBT Historic Sites Project.

Recently, McCarthy and some Trust donors (not directly linked to this project) did a walking tour around Greenwich Village with Lustbader and Shockley. Though they barely scratched the surface of LGBT history in New York, Kerry said it was nice to have a chance to see at least part of the project’s map “come alive.”

“We think it’s terrific to shine a light on LGBT history because it has been in the shadows,” McCarthy said, “and the more people understand the significant cultural role the LGBT community has played, the better off we’ll be as New Yorkers, and Americans.”