Regina King has remained an onscreen MVP ever since she began her career as an actress over 30 years ago. Her skills as a magnetic dramatic force had started to be recognized with a string of amazing supporting roles in shows like Southland, The Leftovers and American Crime. King’s pressence onscreen in the anthology series American Crime won her two back-to-back Emmys for Best Supporting Actress in a Limited Series. But this year, she was given the award for her lead performance in Neflix’s intense drama Seven Seconds from The Killing’s Veena Sud. It was a real moment for King and the world to recognize her as a leading actress.

Regina King has recently partnered with Gillette Venus for a new campaign called HER SHOT to bring female directors into the world of marketing as less than 7 percent of all video content created by these agencies are created by female directors. As a director herself, King has worked helmed episodes of numerous shows including Insecure, Shamless and This is Us. With this program, she will mentor 10 different female directors and give them tips and her perspective on this industry. We spoke with King about her Emmy win and why representation is so important in the entertainment industry.

Regina King is fighting for female voices to be heard 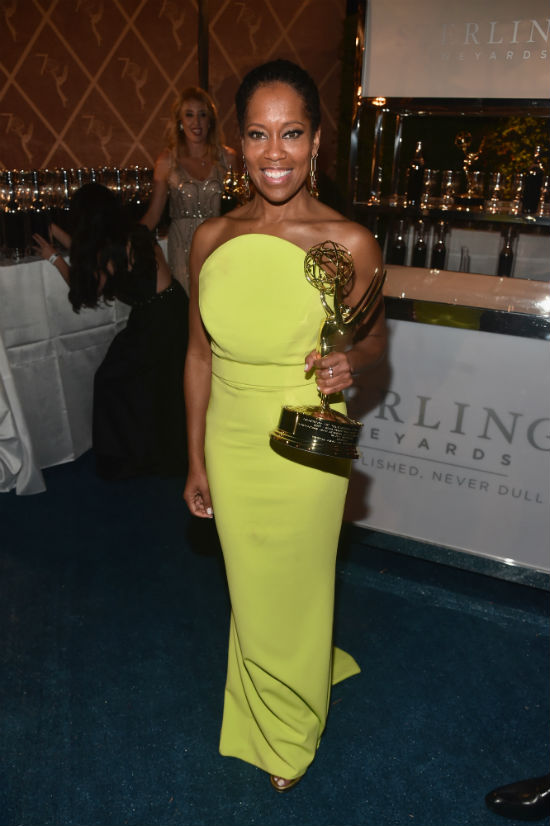 Regina King won the Emmy for Best Lead Actress in a Limited Series for her role as Latrice Butler in Netflix’s Seven Seconds. Photo Getty Images.

Congrats on the Emmy! This is your third Emmy and first for a lead role for Seven Seconds. I think I speak for a lot of people, in that you have deserved this kind of lead role for a long time. How did it feel when they called your name?

Regina King: It felt a bit surreal. I think each one is quite different. But this one, just because of the optics from my perspective, it was a really huge surprise. It felt good. It felt good especially because of the subject matter. Hopefully, the honest part of awards shows is that they were created to bring more eyes to material and storytelling. So my hope is that, because it’s on Netflix, this win will bring a whole new group of eyes that may have missed Seven Seconds before to check it out and get their feels.

That’s an interesting point. People watch things on their own schedules now with streaming services. I guess Awards Shows have to accommodate the ways everyday people actually watch things.

Regina King: Absolutely. 100%. When you look at the Oscars, when movies have been nominated well after they were out, they are re-released. They go back into the theaters. Again, awards are great. But, the general reason for them being developed is to get more eyeballs on the content.

What drew you to take that role of Latrice Butler on Seven Seconds? Were you a fan of Veena Sud’s other work like the show The Killing?

Regina King: I’m going to be honest — I was aware of Veena Sud and I was aware that Veena Sud was someone that, after she had done The Killing, she kind of became a popular name in our industry as far as creators to be in business with. For me, I don’t really judge things based off of someone’s past work. We’ve seen several situations in art where a sophomore effort or a junior effort is not quite the same as a freshman effort. Veena had been in this business working prior to The Killing and had definitely established herself as a name and a force. The Killing just pushed it over the top. She was someone that a lot of different networks were trying be in business with. I’m always a fan of women being able to have longevity in such a male driven space. Which is part of the reason why I partnered with Gillette Venus. Then I read the pilot script for Seven Seconds and was very much aware that this hype surrounding Veena Sud was not hype. She was backing up everything. The energy and excitement around her, she backs it up with the pen and the paper. She’s a beautiful writer.

Aside from acting you have been directing a lot of television. Can you tell us about your new partnership with Gillette Venus’ and the HER SHOT campaign to get more women behind the camera?

Regina King: Basically, as I was saying, I’m just a champion of hearing more voices that are from different perspectives. By that I mean, the reality is the content that we are consuming is not reflective of the numbers of our human population. Because that is the case, when I found out that Gillette Venus was creating a space for female creators that would not have had the opportunity to show their content or have a platform for people to even know that they exist and are out there telling stories and creating content — I was excited. It was kind of a no-brainer for me to partner up with them and kind of be a voice for these ten women who are so different and so talented. While they are all female, all of their perspectives are different. That’s really the biggest thing that myself and Venus are trying to bring light to. It’s not just about the male vs. female. It’s that we’re missing out on over 50% of fresh voices and fresh perspectives on storytelling and expressing content. For anybody out there that considers themselves an artist or a consumer of art, we’re being cheated! We’re not getting the opportunity to see all of the art.

This kind of goes hand in hand with the call for more inclusion riders in the entertainment industry.

Regina King: Absolutely. Whenever you are in a position of power or to create more opportunities, then that’s paying it forward. That’s the reason humans exist! That’s what we’re supposed to do. I hope that other companies will see what Gillete Venus is doing and look at this model and follow suit. Just the way they create their products I think is really unique. It shouldn’t be unique, but it is. The fact that they are creating them after doing the research on what it is that women need with their hair removal. What would be best for them and applying it into their development of products. I’ll tell you this — from a person who loves shoes — I feel like sometimes there is a man that has never walked in a heel in his life who has made the shoe. It sure is pretty, but it does not feel good! (laughs) I think that is what makes Gillette Venus unique because they are not just creating a product because it is pretty. They’ve created a product based on researching and talking to women about their needs.

Do you have any plans to direct a feature length film?

Regina King: That is one of the things that has been beautiful as my career as an episodic director is that it’s definitely been a lot like school for me and preparing me for when I am going to have my theatrical debut. Which will hopefully be next year if all continues to go according to plan.

You will be starring in the new The Watchmen series on HBO. Can you tell us about it? Were you a fan of the original comic?

Regina King: Actually no, but I’m a huge fan of Damon Lindelof. I think that he can write about anything and make it interesting and make you realize that there is a story behind everything. My relationship with him on The Leftovers allowed me to discover that. So when this came around, it was kind of like a no-brainer for me because I had been wanting to play a hero for a while now. I feel honored that Damon saw in me that I am still capable of playing a hero. He’s giving me an opportunity to kind of live a dream in a lot of regards. It could have been Watchmen or anything. It just had to be someone who understands and is just a beautiful storyteller. Damon really is. He’s captivating. I’ve been lucky to work with a lot of really great storytellers and Damon is at the top of the list. I get to play in the sandbox again with Damon. So, it’s pretty exciting! We start up in a couple of weeks.

You can learn more about Regina King’s involvement with the HER SHOT campaign and view all the content from these directors by visiting the Gillette Venus Instagram TV hub at Instagram.com/GilletteVenus and using hashtag #HerShotxVenus.