What happened to Myspace? The social network with an emphasis on pop culture seemed to become a thing of the past when, thanks to Mark Zuckerberg and friends, Facebook swooped in. But — news flash — Myspace still exists.

Myspace created the idea of a “social network.” According to Lifewire, it surpassed Google Search and Yahoo! as the most visited website in the U.S. by 2006. At its peak, in 2008, it was attracting 75.9 million unique visitors a month. But Facebook soon took over.

I distinctly remember being told that, going into high school, one needed a Facebook. It was the “thing” to do, and Myspace was on its way out.

Facebook was founded in 2004, opened to the public in 2006 and spiked in popularity about three years later.

When asked in 2007 how Myspace was handling Facebook’s growth, founder Tom Anderson said on The Hour, “Facebook is quite different.”

“It’s mostly people talking to each other that know each other, and Myspace has been more open,” he explained.

“Facebook is more about who you know,” Anderson continued, “and Myspace is more about meeting more people and the people you know and music and video and all these different cultural aspects.”

Facebook, though, upped the ante. By December 2009, with 350 million registered users, it was officially dubbed the world’s most popular social platform.

One Metro staffer admits she stopped using Myspace by 2009 because everyone was gravitating towards Facebook. Speaking of it in past tense, she shares, “I used to write about music a lot, so I used Myspace often to listen to bands I’d be writing about, especially those who were local artists or other smaller, indie bands coming to the area.”

“Beyond that,” she continues, “I have no other memories of the platform, [except] for sharing funny pics with my friends.”

this was my myspace default back in middle school. i know, it’s a lot. pic.twitter.com/PhgBUyOZDe

So, what happened to Myspace?

What happened to Myspace? The beginning

Myspace was founded in 2003 by Anderson, Chris Dewolfe and Jon Hart, users of the social gaming site Friendster.

Many of today’s famous artists amassed a huge following thanks to Myspace. For instance, Dane Cook utilized the site to connect with his fan base. According to Forbes, the comedian put up his page in December 2003, three weeks before Myspace officially launched.

Cook linked to his personal websites, posted content, advertised for upcoming gigs and interacted with fans. By doing this, his manager said, “Dane was one step ahead of me and the rest of the comedy community — and the world.”

What happened to Myspace? A timeline of change

Myspace was acquired by News Corporation in 2005.

With the onset of Facebook, Myspace eventually suffered. Lifewire reports that Myspace had 95 million unique visitors in March 2010 but dropped to 63 million by March 2011.

Justin Timberlake bought Myspace in 2012 along with Tim and Chris Vanderhook. They redesigned the site as a social media platform specifically catered to artists and their fans.

JT tweeted out a link introducing a “new” Myspace that year.

Chris Vanderhook told the New York Times in February 2012 that the new focus was not a way to compete with Facebook, but it was a way, as the Times paraphrased, “to be the conduit for music and other forms of entertainment that can be shared through other networks.” A social entertainment network, if you will.

On June 12, 2013 Myspace officially announced the launch of a new desktop and mobile platform, and Time Inc. acquired Myspace three years later in 2016.

What happened to Myspace? Here’s what it looks like today

Myspace is still owned by Time Inc. According to Myspace stats, there are 14.2 million artists and 53 million songs on the site. Myspace receives 13K song uploads per day.

“Myspace is a place where people come to connect, discover, and share,” reads a description on the site’s press page. “Showcasing artists and their work, the site gives people access to 53 million tracks and videos-the world’s largest digital music library.” 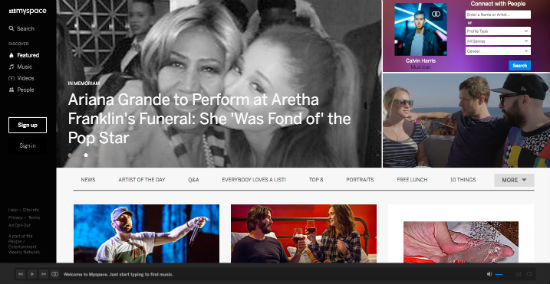 As of now, you can no longer access a Myspace app, though you can still use the site on your phone.

So, what happened to Myspace? Nothing besides a redesign to reinvent itself and stay relevant in today’s age of Snapchat filters and Instagram stories. How do you think it’s holding up?