Rob Huebel: We should have elected The Rock, not Trump - Metro US
Celebrities

Rob Huebel: We should have elected The Rock, not Trump Rob Huebel is the one in “Baywatch” who spends the whole movie in a three-piece suit. In the big screen take on the Clinton-era show, he’s Captain Thorpe, the bureaucratic head of the rock star lifeguard outfit run by Dwayne Johnson’s Mitch Buchannon. Everyone, from the characters played by Zac Efron and Alexandra Daddario and Kelly Rohrbach, runs around in bikinis and one-pieces. Huebel is just one of the ad-libbing ringers, cracking jokes alongside the also very funny Johnson and Efron.

We talked to Huebel, 47, a longtime, “Hey, that guy!” of comedy, whose hits include “Children’s Hospital,” “Keanu,” “Transparent” — and his own, old sketch show, “Human Giant,” which he made with Aziz Ansari and Paul Scheer. Huebel talks about not getting into shape, possibly voting for one of his latest co-stars and how his daughter, born extremly premature, is doing now.

So you might have made a movie with our future president, Dwayne Johnson.
It’s insane. But let’s be nice to him so he can let us be part of his cabinet. And if The Rock becomes the president, think of how much money we’ll save on the military. We won’t need as many guys — we’ll just send The Rock over in a helicopter with a shotgun. He’ll go all over the world and fix our problems, because he’s The Rock.

He can just do that eyebrow thing to our aggressors.
Yeah, he can raise his eyebrow at North Korean leader Kim Jong Un, and he’ll snap into line. We won’t have any more problems.

So tell me about Zac Efron’s abs, which you’ve seen in person.
Yeah, I’ve seen his abs up close. I’ve never seen anyone in shape like he is. Really, everyone in the movie had to get in crazy shape except me. When they weren’t shooting, I would look around and everyone was either planking or use those exercise bars to keep your muscles pumped up. I would just be eating a cupcake from craft services.

You didn’t even get into shape just out of solidarity?
I did the opposite: I gained 20 pounds for this movie. A lot of actors do that for movie parts, but only when the director asks them to. I just volunteered to gain 20 pounds. 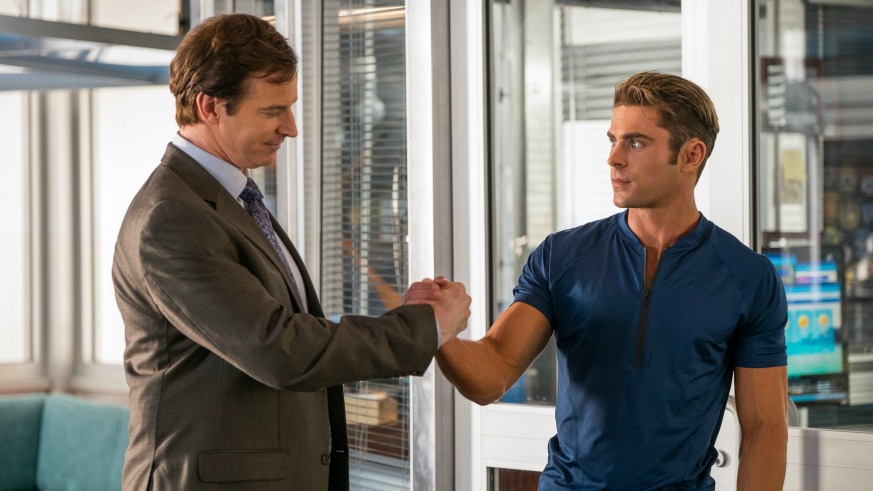 I first saw you on your sketch comedy show “Human Giant,” with Aziz Ansari and Paul Scheer. How often do you see those guys?
Actually, last week was the 10 year anniversary of this takeover we did at MTV, where — for some reason, it’s still a mystery to me — MTV let us do a live show on the air from Times Square for 24 hours. We had all our comedy friends come and do some little bit or sketch, and we had to fill up 24 hours. We’re still buddies, though. I don’t see Aziz as much because he lives in New York a lot of the time, and I live in a place called Hollywood, California. Scheer’s my neighbor, so I see him a lot. We have babies that are about the same age. We’re sort in the same dad mode right now.

How is your daughter doing? She was born terrifyingly early.
She’s really great, man. She was three months premature, which was really, really scary. We were in the NICU at Cedars, a hospital out in L.A., for 117 days. We just got her home a couple months ago, and she’s doing great. Now she’s up to 16 pounds. She’s this fat little rolly-polly baby. She’s super healthy and hilarious. When a baby’s born that early, there’s all kinds of stuff that can go wrong. Thank goodness we had these amazing doctors and NICU nurses keeping an eye on her. So a shout out to the heroes in the NICU, and a shout-out to insurance. Get some insurance while you can.

How’s fatherhood?
It’s super fun. I was really hoping that we would have a boy, just because I’m a boy and I figured I could relate more to boys. But we had a girl and, man, I’ve got to say: Screw boys. I don’t care about boys. Having a girl is the best thing in the world. She is so cool and funny and opinionated and sassy. It’s so much fun hanging out with her.

Increasingly, in this age of sexist presidents and Men’s Rights Activists, I agree that boys suck.
Oh, for sure. I was thinking that she came early because she thought there was going to be a girl president. That didn’t work out.

Speaking of which, I didn’t realize that your first screen role was an uncredited part in “Bowling for Columbine.”
Yeah, that was my first job. I used to work for Michael Moore. I was just a young pup, and I was trying to get going in the comedy world. Michael took a big chance on me and gave me my first job in comedy, working for his show, “The Awful Truth.” Then he made “Bowling for Columbine,” and he needed someone to play a businessman. If you go back and watch it, there’s this weird, silly montage in the middle where it’s cut to that “Bad Boys” song from “Cops,” and you can see me being beat up by Michael Moore.

I’m glad he’s not holding back. He has a Broadway show and he’s making an anti-Trump movie.
If anyone can bring Trump down singlehandedly, it would be Michael. It’s going to take an army of us, but Michael’s going to lead the way.