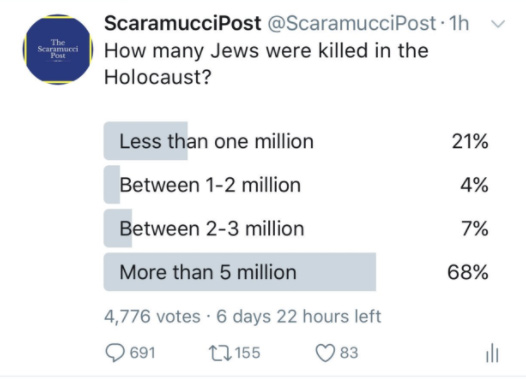 The tweet was removed about an hour after it was posted, however, it did not take long before people grabbed a screenshot of the tweet and began criticizing it for being insensitive and anti-Semitic.

This poll was put up by @lancelaifer without consulting @Scaramucci who is traveling in London.
The poll has been taken down. pic.twitter.com/SKaaPZAPow

Laifer followed with two more tweets saying he apologizes for “anyone who was offended by the Holocaust poll.” He also mentions that he was trying to “highlight ignorance of the basic facts of the Holocaust.”

The intent of the poll was to highlight ignorance of the basic facts of the Holocaust. I take full responsibility for it.

This is @lancelaifer and I apologize if anyone was offended by the Holocaust poll.

In September, Anthony Scaramucci decided to create his own news media outlet after he was removed from his role as White House communications director. He took to Twitter to make the announcement. As of today, the Scaramucci Post doesn’t have an official website and appears to only exist on social media.

Also I just asked him to explain the Scaramucci Post in 10 secs and he was like actually we have no idea what it is yet ? pic.twitter.com/lCyGJXG04u