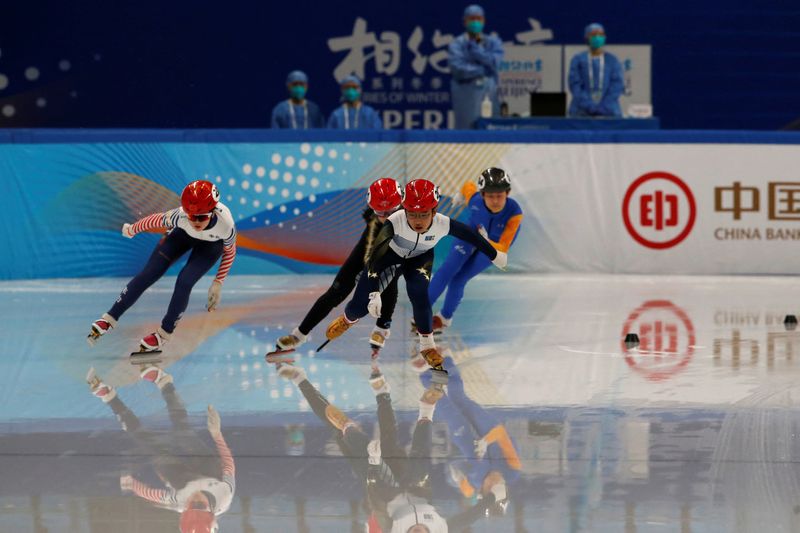 The event made its Olympic debut at the Albertville Games in 1992, four years after being introduced as a demonstration sport in Calgary.

Skaters – usually between four and six – compete on a 111.12-metre long rink, making it a very chaotic, high-octane event.

There are nine events at the Beijing Olympics after the addition of a mixed team relay.

South Korea dominated the discipline with three gold medals and a total of six podiums, ahead of China (one gold, four podium finishes).

Italy’s Arianna Fontana became the female with the most Olympic medals in short track speeding skating by winning gold in the 500m, silver in the 3,000m relay and bronze in the 1,000m to take her tally to eight. It also tied her with the most successful men in the Games – Apolo Ohno and Viktor Ahn.

WHAT TO EXPECT IN BEIJING?

Fontana, nicknamed the “Angelo Biondo” (the Blonde Angel) will be gunning for a record-breaking ninth Olympic medal after winning at least one in every Olympics she took part in since her debut in Turin 2006.

China will be out to top the medals table for the first time since the 2010 Games in Vancouver.

Dutch sensation Suzanne Schulting, 23, will be an athlete to watch. She took gold in the 1,000 metres in PyeongChang, and won every event at the 2021 world championships.

The competition takes places from Feb. 5-16.

At The Capitol Indoor Stadium, which hosted the volleyball tournament at the 2008 Summer Olympics and where the figure skating competition will be held.

The mixed relay event will be held for the fist time, over a distance of 2,000 metres.

The origins of short track speed skating date back to 1905, when athletes in the United States and Canada competed in speed skating events on oval tracks. However, due to the lack of 400-metre long tracks in both countries, many North American skaters started to practise on ice rinks instead.

The Capital Indoor Stadium, built in 1968, hosted the “ping-pong diplomacy” table tennis games between the United States and China in 1971, leading to president Richard Nixon’s visit to Beijing the following year.