Soccer-Newcastle on the up as escape bid gathers momentum 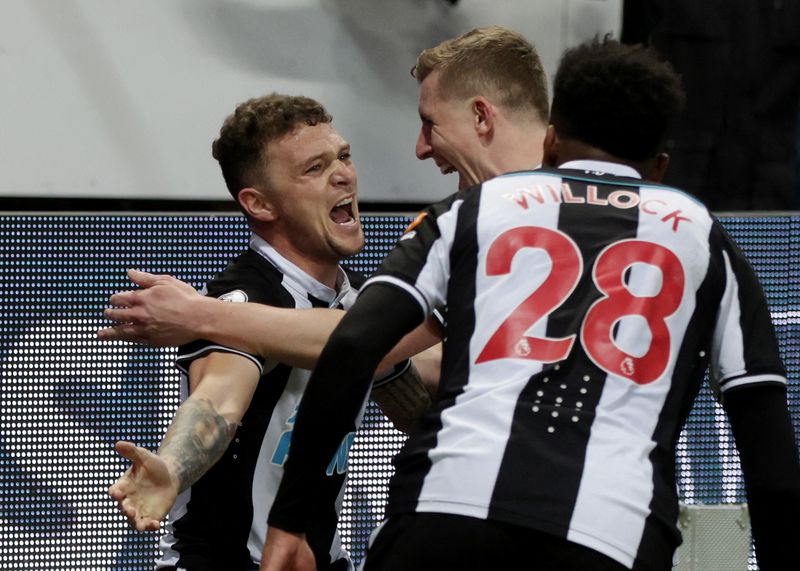 LONDON (Reuters) – When the full-time whistle blew on Newcastle United’s 3-1 victory over Everton, St James’ Park erupted in celebration — the like of which had not been heard on Tyneside for a while.

As Beatles classic “Hey Jude” resounded around the stadium and new Toon hero Allan Saint-Maximin joined in the chorus, it felt like a dark cloud had finally been lifted.

All that had actually happened was that Newcastle, for the first time this season, moved out of the Premier League relegation zone.

For a team whose already lofty ambitions went into the stratosphere after Saudi Arabia’s Public Investment Fund bought an 80% stake in the club in October, such a modest milestone hardly seemed cause for such hysteria.

But after a season of woe in which Newcastle did not win a league game until January, it felt like a pivotal moment in their bid to avoid relegation.

Eddie Howe’s side aim to maintain the upward momentum as they host Aston Villa on Sunday seeking a third successive league victory for the first time since November 2018.

They will do so brimming with confidence after the display against Everton in which Saint-Maximin was electrifying, Kieran Trippier scored a stunning free kick and new 40 million-pound Brazilian signing Bruno Guimaraes made his debut off the bench.

Howe, who replaced Steve Bruce after the takeover, is wily enough to know that one joyous night will not make or break Newcastle’s survival mission and a let-down against a dangerous Villa side would put his team back in the mire.

“The challenges come thick and fast and now we move on to Aston Villa,” Howe said after the win over Everton in which Newcastle recovered from going behind to an own goal.

“We’ve got a lot of work to do, but the most important thing from us at this moment in time is that we’re seeing the commitment from the players. We’re seeing the togetherness.”

A calf injury to Trippier took the gloss off the win with Howe saying it would be “devastating” to lose him at such a crucial period.

And while Everton were there for the taking, a Villa side enjoying life under Steven Gerrard will provide a much tougher examination, especially with Philippe Coutinho showing the kind of form he once displayed regularly for Liverpool.

He scored one and made two assists in Villa’s 3-3 draw with Leeds United on Wednesday.

Newcastle will also be wary that the three teams below them, Norwich City, Watford and Burnley are all showing enough to suggest any of them could escape.

Norwich, third from bottom, are unbeaten in three games although they host leaders Manchester City on Saturday.

What had looked like being a straight fight between four teams at the bottom has also expanded with Frank Lampard’s Everton and Brentford now involved in the relegation battle.

Everton’s loss at Newcastle was their fourth successive league defeat and they are now only two points above the drop zone ahead of Saturday’s visit of Leeds.

Brentford, too, despite all the praise they have received this season are only six points above Norwich and have played more games than all those around them.

So while Man City are threatening to make the title race a procession, the battle for survival is set to be a thriller.