Stacey Abrams on the state of our nation With the conclusion of the first two Democratic debates of the 2020 election behind us, we are now getting a clearer picture of a possible change of power in Washington. We spoke with Georgia leader, Stacey Abrams, who will be speaking at this year’s OZY Festival along with newly announced speakers Kirsten Gillibrand and Beto O’Rourke, about the rights we need to protect as American citizens given the current state of our nation and whether or not she will throw her hat into the 2020 race for the presidency.

“My work is focused on making certain that every American has full access to our democracy,” – Stacey Abrams 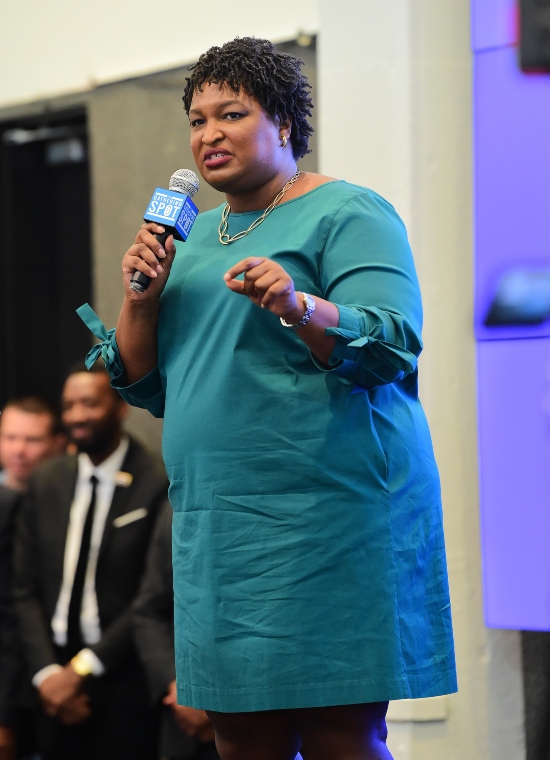 We are currently living in one of the most politically divided times in our country’s history. You will be appearing at this year’s OZY festival. Tell us about your involvement and what kinds of messages you hope this festival will convey.

Stacey Abrams: Well, I’m excited, this will be my first OZY Fest, but I have seen a bit about the previous ones and I’m excited to be a part of it. My work is focused on making certain that every American has full access to our democracy, because this is about power. It’s about our power to shape our future, our power to participate and how our values are lived. And voter suppression in my mind is the strongest and most prevalent existential crisis that we face. Because our ability to make decisions about climate change, about reproductive choice, about criminal justice reform, about healthcare, all come back to the question of, do we have full participation in our democracy?

With today’s Supreme Court decisions, we have seen a bit of a whipsaw where partisan gerrymandering will be allowed. But luckily the citizenship question of the census, won’t be. And one of the conversations I hope we have is a conversation about the fact that, this means that every voice will count, and to an exceptional degree in 2020. That we must have every person’s participation, because the decisions to be made for the next 20 years through redistricting, will happen based on the census, and based on our ability to elect leaders in 2020, who reflect our values and respect our choices.

It’s an understatement to say that the Trump administration seems to be downplaying the threat of foreign influences in our elections. As someone who has suffered the consequences of election tampering, first hand, how important is it to make sure one of our most sacred rights as Americans remains intact?

Stacey Abrams: Exactly. And, what we have to understand is that foreign influence has its effect in part because of the distance that’s been created, from citizens and their ownership of their right to vote, and their ability to execute it. When you have three streams of information in an election cycle, information, good information, bad information and disinformation. If there isn’t an active supply of good information, then either bad information or disinformation will guide the decisions made by the most vulnerable of our voters. And so, one of the joys of our campaign in 2018, for me, was being able to go into communities that have been unseen and unheard, that had been ignored by politicians, and did not understand just how vital, and effective they could be. We can’t stop foreign influence completely. We can certainly do more to mitigate it. And I wish we had leadership in DC, in the Republican party in particular that would be willing to take up the questions of election security. But, in lieu of their actions, our best defense is to have good information going to these editors. Making certain, as they know they have the right to vote, they understand what’s at stake, but also that we have cleared a path within our power, which is to remove obstacles to voting, by eliminating voter suppression.

The support for impeachment seems to be growing by the day. Given what we have learned from the Mueller report, do you think now is the right time to begin impeachment proceedings?

Stacey Abrams: I actually do not see those as a common question. Impeachment should be based on the behavior of the president. Whether the president broke the law or not, whether he committed impeachable offenses. And that should be determined by the legislature. I support Speaker Pelosi’s approach, which is to actually gather the information and the evidence necessary, to demonstrate the fullness of his … that action such as they may be. And so, I don’t think that timing is the question. I think the real issue is making certain that we have a record that is accurate and full and complete and can withstand what will come of an attempt at impeachment. Because the reality is you … in the legal world, you do not prosecute until you have sufficient evidence. And while the Mueller report is damning, we need full information. So we understand not only what the questions are, but what the answers are.

Right. And do you think the conversation will change once Mueller testifies?

Stacey Abrams: I think it will continue to evolve, but I think it’s just as important that we watch what’s happening in Chairman Nadler’s committee, with the information they are seeking to secure, what’s happening with Chairman Cummings, and the information he’s seeking to secure. The machinations of legislative bodies can sometimes seem boring and plotting, but you want the clearest pathway, and you want the deepest amount of information. And having served in a similar role for several years, I know it can sometimes feel very … it can feel dithering to those on the outside, but I actually support the goals of our Democratic Caucus, which are to make certain in the democratic leadership, to make certain that we’ve asked the questions, and have the answers before we take this extraordinary step. We’ve only impeached two presidents in American history, and it is a critical question to me that we do this properly. But the point of a primary is to articulate ideas and to refine those ideas through the context. And I believe that for Democrats, given what we faced from the other side, with notions of rolling back rights, and denying access, and impeding progress, I welcome the opportunity to have such smart, thoughtful people, offering such clear visions for how we move our country forward.

We are currently in the beginnings of the 2020 election cycle. There are a lot of candidates to choose from, are there any that you have been blown away by? Who will be the best bet to lead the Democratic party into the future?

Stacey Abrams: I am a loyal Democrat who will do everything I can to support candidates who are willing to focus on the issues of voter suppression and expanding access to justice, and who will campaign in Georgia. And I will be foursquare behind whoever emerges as the nominee of the party.

Many people thought that you would be running. Is there still a possibility?

Stacey Abrams: It is. No, it’s still something I’m considering. I have always said I want to. I think that certainly, the fall is the deadline for making a decision, and that is what I’m looking at. But you know, I will say that I will run if I believe that there is value that I can add to the debate, and add to the contest, and if I believe I can win. But I am incredibly pleased with the caliber and quality of the candidates we have now, which is why I haven’t thrown my name into the ring yet.

Do you think having this many candidates hurts or strengthens the Democrats’ platform?

Stacey Abrams: I think it’s a perfectly appropriate number of candidates. We forget that in 1992 I think it was 18 candidates. In 2016 it was certainly 18 candidates. We have had larger fields, I think on the Democratic side because we have had smaller fields, both in 2008 and 2016. We have sort of a short term memory problem that this is not an unusual surfeit of candidate. What is different is that the debates have started earlier, and the winnowing process in different than it was, you know, a generation ago.

We are now witnessing a true atrocity at our border with more information coming in regarding inhumane conditions in holding centers for undocumented immigrants. Would you agree with Alexandra Ocasio-Cortez in saying that these conditions mirror concentration camps or is this something completely different?

Stacey Abrams: I think the semantics cloud the point. Which is that we are, as a nation, we are being led by someone who is engaging in inhuman behavior that weakens our democracy, demonizes the most vulnerable, and treats fellow humans and dehumanizes them in a way that is deeply, deeply offensive to who we are. And so, we have to recognize that, rather than debating, the language of the description, we should be appalled by the need for language, to define what we are doing. And regardless of who is in charge, this is being done in America’s name, and we are all obligated to decry it, and to push for better, and to demand that we return to the moral core that should be guiding our nation.

Stacey Abrams will be speaking at this year’s OZY Fest in Central Park July 20 through 21.